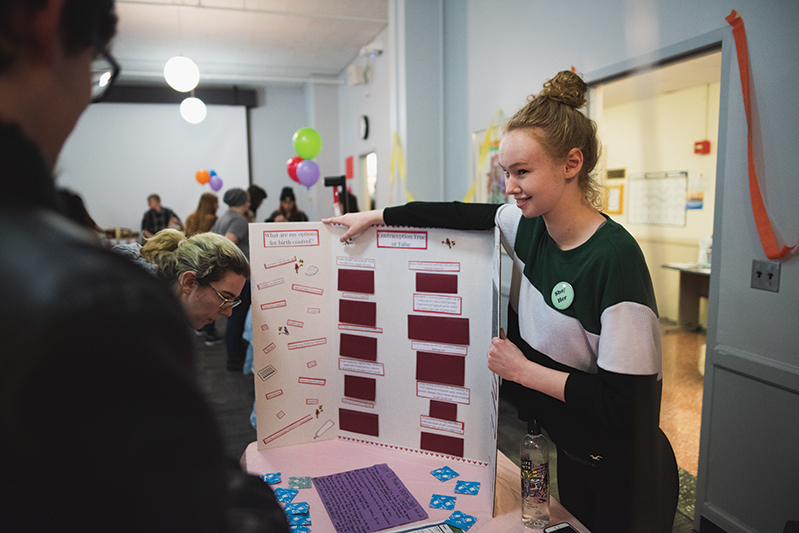 Last week the Student Alliance for Sexual Health (SASH)  hosted “Sex Week,” a series of events that allows students to learn about their health, rights and sexuality in a sex-positive and stigma-free environment. Each presentation or discussion granted students the opportunity to explore different aspects of sex and sexuality, while also attempting to disseminate and clarify student’s knowledge about such things.

A “Know Your IX: Learn About Survivors Rights” event was held on Monday morning, offering students the chance to learn more about the rights of sexual assault survivors, harassment and other forms of sexual violence. Tuesday morning, organizers held a clothing swap in the Lown Room of the Memorial Union, and later hosted a “Makeup Extravaganza.” Other events included “Body Positivity and Ice Cream,” their semi-annual “Sex Carnival” and an event on the “Crisis Pregnancy Center.”

The week ended with the Sex Carnival, a popular event held in the Memorial Union that gives students, faculty and other community members the chance to come together and learn about different aspects of sex regardless of orientation and gender. Booths included information from local organizations, such as the Mabel Wadsworth Center, the 1 in 3 Campaign, Partners for Peace, Rape Response Services and Planned Parenthood Generation Action. Other booths offered information on consent, pronouns, transgender health, menstruation, contraception, sex work and other relevant concepts.

Liliana Bonarrigo, a second-year political science student and a member of the UMaine Feminist Collective, assisted with setup and ran the prize table. Like many others, Bonarrigo enjoyed the music and games at the Sex Carnival.

“I think the Sex Carnival destigmatizes a lot of misconceptions about sex as well as sexuality and gender, since there’s also a focus on trans health, menstruation, etc. It makes what would generally be potentially uncomfortable topics and makes them fun,” Bonarrigo said.

Upon arrival attendees were given a welcome bag filled with flyers for several of the organizations present, condoms and other items such as pens and lip balm. Visiting all booths was encouraged, and if a person in attendance visited every table they could be entered to win a prize.

“I think people should know that it’s an event about sex, but it’s meant to be a comfortable space for people and to give people the opportunity to learn and ask questions in an environment that normally wouldn’t allow for that, while still having fun,” Bonarrigo said.