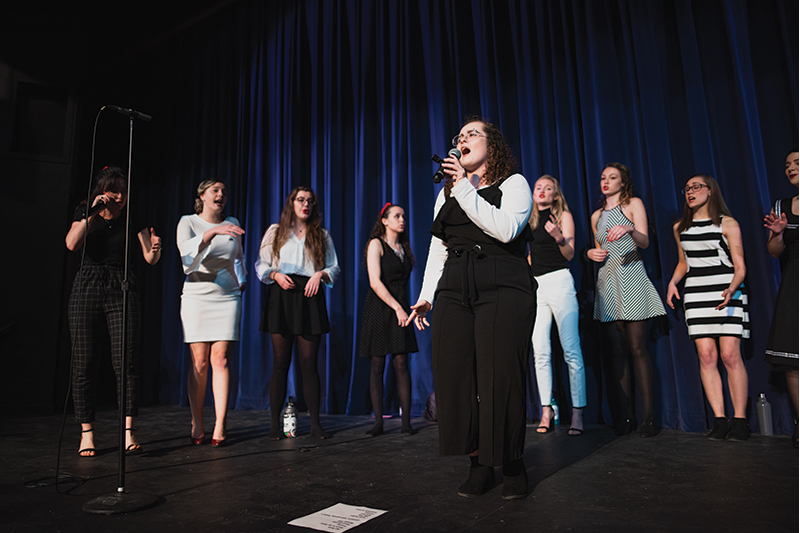 “Everyone was so excited and talking to each other before the show,” Autumn Rogers, a first-year biology student, said. “There wasn’t a single dull moment, and the groups had the audience shouting for an encore and clapping on their feet.”

UMaine Renaissance is a group of 12 women singers from the UMaine community who performed at and hosted the event. They invited the Maine Steiners and UMaine Farmington’s Clefnotes to share the stage. Each group took turns performing their a capella numbers.

Renaissance started off the night with many upbeat songs, which included a rendition of “Raining Men” by The Weather Girls with hand clapping, stomping and beatboxing. The group sang a mixture of classic sing-along hits as well as newer pop songs.

“I saw Renaissance perform at my high school, senior year. I thought they looked like they had a lot of fun, and they sounded amazing,” Brooke Pietri, Assistant Director UMaine Renaissance, said. “I saw them perform for the University Singers my freshman year here, and decided I really wanted to be a part of this tight-knit group of girls.”

Pietri is a third-year music education student and is also vice president of the University Singers.

The Clefnotes followed up the performance with three songs they arranged. These include “My Name is No” by Meghan Trainor, “The Night We Met” by Lord Huron and “Boondocks” by Little Big Town.

After a short intermission, the Maine Steiners took the stage with a performance of “Wagon Wheel” by Old Crow Medicine Show and their own mashup of other classic songs. The Maine Steiners are a 14-member all-male a capella group.

“All three of the groups brought something unique and different to the showcase, no two singers sounded alike,” Rogers said. “There was a good mix of energetic, upbeat songs and slower, quieter ones.”

UMaine Renaissance finished out the night with Mumford and Sons’ “Timshel” and Queen’s “Somebody to Love.” The members took turns speaking into the microphone giving thanks to the audience and credit to the members who arranged each song.

The women of UMaine Renaissance perform many concerts and shows throughout the semester. The small audition-based group was founded in 1999 and has been performing a capella music at UMaine ever since.

“The wide variety of music genres and singing ranges got the audience excited and kept them engaged. It’s always a pleasure to see all the girls dressed up and hear them perform well-known songs we can sing along to,” Kimberly Stoddard, a third-year parks, recreation and tourism student, said.

The group rehearses five hours a week on Mondays and Fridays from 6:30-9 p.m. and an additional five hours with the University Singers. On Jan. 15-18, UMaine Renaissance will be going on their annual winter tour. On Feb. 9, UMaine Renaissance and the Maine Steiners will be representing UMaine at the International Championship of Collegiate A Cappella at the Berklee Performance Center in Boston, Massachusetts.

To see a live stream of the performance you can visit the UMaine Renaissance Facebook page.

This week in GSS
Finding a personal narrative in Russia