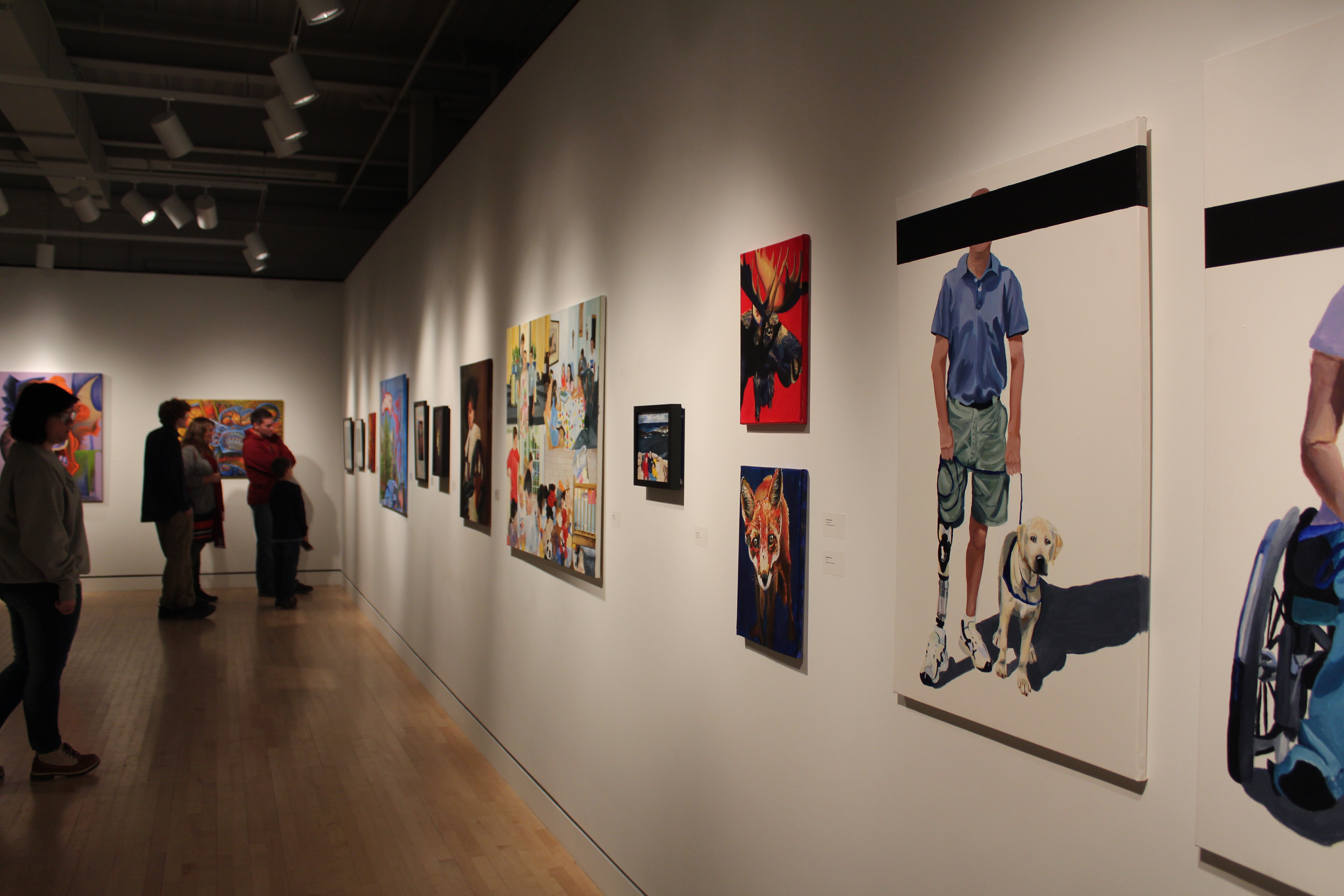 On Friday Dec. 7, an exhibit titled “Collective Ground” opened in Lord Hall, featuring the work of nine fourth-year studio art students. Dozens of people explored the exhibit between 5:30 and 8:00 p.m., sharing the opportunity to meet with the artists and other attendees, as well as discuss the art in the showcase. Refreshments were offered in a separate room while live music, including a bass player, keyboardist and a drummer played ambient music.

The featured artists planned every aspect of the show themselves, from the use of space and the display of pieces to the refreshments served. A variety of mediums were used, including oil paints, acrylics, intaglio and woodblock prints, wood sculpture and digital art. Each artist had a distinct style, using their own variety of mediums.

Gabrielle Bock used digital painting and aluminum to paint a series of working dogs, set of paintings on canvas featuring the dogs and their handlers and other works including animals. Mary Manley’s work featured a multitude of human portraits, as well as a large acrylic painting featuring a man in a truck, a chapel, and several floating sex toys with the title, “BOING!” written across the sky.

Maya Silver’s work included intaglio prints of Jerusalem, as well as a tree titled “Capsula Mundi” (which, in English, means “Burial Pod”) and several large portraits either done in charcoal or painted. Abigail Annis used woodblock to create pieces such as “Stems” and “The Forest and the Flock,” which featured fighting foxes and ravens. She also used intaglio to create works such as “Submerged,” a duo of prints featuring a face submerged in a pool of water.

Deborah Heyden’s pieces were over a wide variety of mediums, including wood sculpture, woodblock prints, and oil on canvas. Many of her works feature animals, like ravens and chickens; her wood sculpture used the natural curvature and knots of the wood within the structure of the piece.

“I really enjoyed the process [of putting the show together], and the evolution of random pieces of art from different artists merging into a nice show,” featured artist Deborah Heyden said.

She also discussed the difficulty of deciding which pieces would be included in the show and which ones would not be. She mentioned looking forward to giving her family the opportunity to see the artwork she has created over the past four years.

The Collective Ground exhibit will be open in the Lord Hall gallery until Feb. 2. The gallery is open from 9 a.m. to 4 p.m. on weekdays and is free and open to the public.