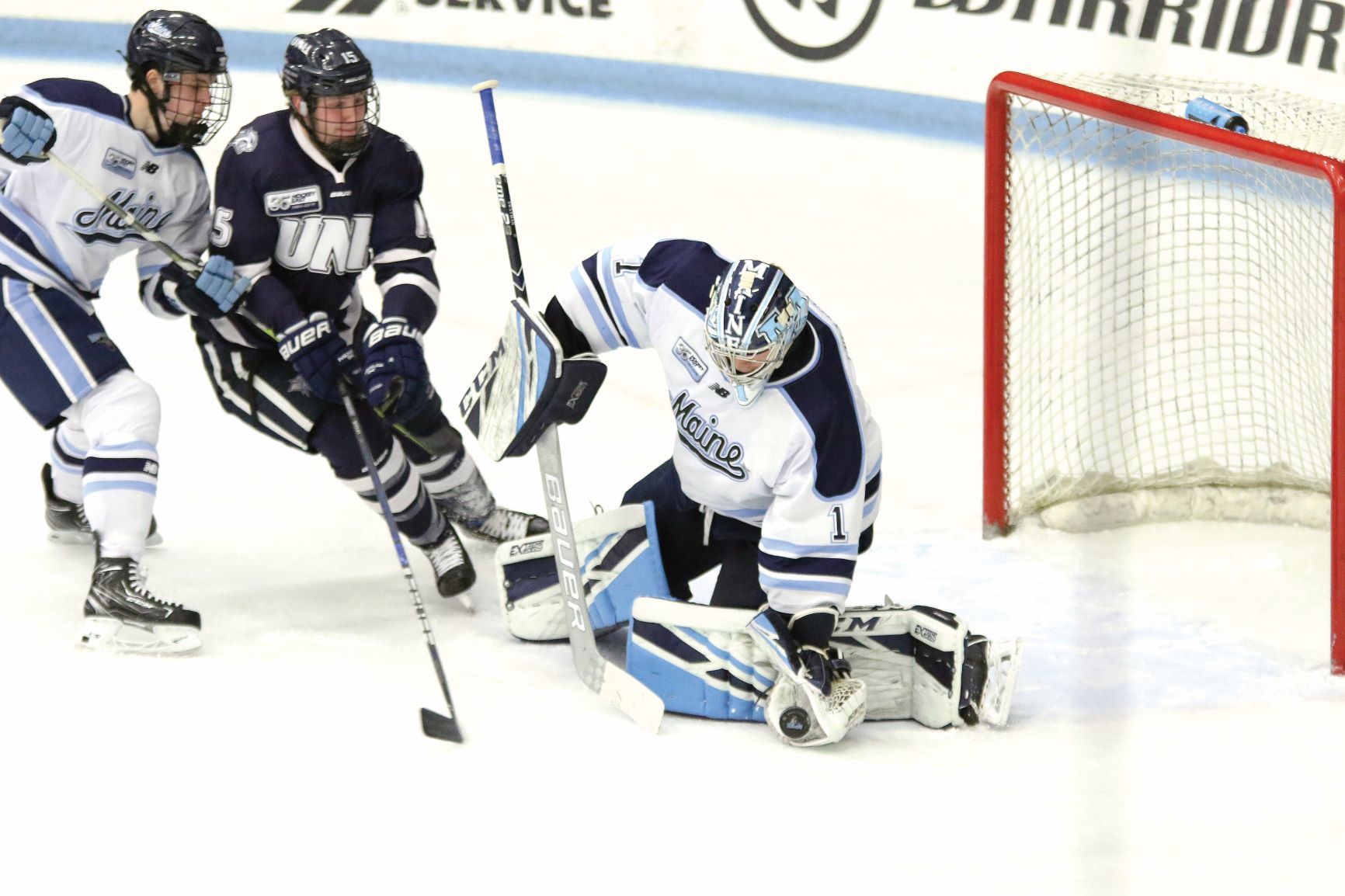 UMass was on the board just three minutes into the contest when first-year defenseman Marc Del Gaizo skated up the ice and fluttered the Minutemen’s first shot of the game past second-year tender Jeremy Swayman from just inside the Maine blue line. Second-year defenseman Cale Makar and third-year forward Niko Hildenbrand earned the assists on the play. The rest of the period was a back and forth between the two teams, with the score staying the same at 1-0 UMass going into the intermission.

The Minutemen started the second period strong. Capitalizing on an opportunity with a one man advantage six minutes into the second, fourth-year forward Jacob Pritchard expanded the Minutemen’s lead to two with his 11th tally of the season. Receiving the puck from first-year defenseman Ty Farmer and Marc Del Gaizo at the points, Pritchard was at the post to tap the feed from Farmer home.

First-year forward Jacob Schmidt-Svejstrup scored his fifth goal of the season to get the Black Bears on the board with five minutes left in the second period. Third-year forward Tim Doherty whipped the original shot from the corner before fourth-year forward Brendan Robbins held on to the puck in a battle in the slot before whipping it on goal. Doherty and Schmidt-Svejstrup crashed the net, with the first-year converting on the play.

The Minutemen came skating back onto the ice in the third period looking to expand their lead. Four minutes into the period, first-year forward Anthony Del Gaizo handled a chip pass and took the puck through center before dishing off to a clustered second-year forwards Mario Ferraro and Mitchell Chaffee in the zone. Ferraro took the puck in deep while Anthony Del Gaizo sprinted to the slot where he put in the loose puck. The Black Bears did not back down; with an extra attacker in the final minute of play, third-year forward Patrick Shea won the faceoff and dished the puck back to second-year defenseman Alexis Binner at the top of the faceoff circle. Binner sent a long shot across the slot hitting UMass first-year goaltender Filip Lindberg before popping back out to the top of the paint, where second-year forward Emil Westerlund fired in the rebound to bring the game within one with just under a minute left in regulation. Makar handled a rolling puck in the defensive zone and fired it the length of the ice for an empty net goal to close out the contest with a 4-2 Minutemen win.

Fresh off of a grueling contest, both teams came out firing Saturday night, as the Minutemen outshot the Black Bears 18-17 in the first period with both goaltenders making huge saves for their teams. Maine found the back of the net first, seven minutes into the first period. Following two faceoffs, Shea won the puck and sent it back to fifth-year forward Canon Pieper who was riding the blue line. Pieper fired off an initial slap shot that was deflected by Minutemen second-year goaltender Matt Murray. Black Bears’ Westerlund took off and snagged the rebound, before burying it from the slot to put Maine on the board.

The Minutemen leveled the score with under five minutes left in the first, as third-year defenseman Jake McLaughlin fired the puck from his own zone to a waiting Pritchard, who cut across the slot before passing the puck over to second-year forward John Leonard. Leonard slipped the puck past Swayman off of a wrist shot.

The second period started out with Maine dominating out of the gate. Six minutes into the period Minutemen second-year forward Jake Gaudet got a major penalty for contact to the head giving Maine a five minute powerplay. The Black Bears quickly capitalized, with Binner firing in a slapshot off of an assist from second-year defenseman Brady Keeper and third-year forward Mitchell Fossier under 10 seconds into the powerplay. Even down a man, the Minutemen tightened up their defense, preventing the Black Bears from scoring for another four minutes. Finding the back of the net just a minute before the conclusion of the powerplay, second-year forward Eduards Tralmaks received a pass from first-year forward Jakub Sirota and fired it through traffic to give Maine a 3-1 lead.

13 minutes into the period, Minutemen second-year forward Oliver Chau accrued a two minute penalty for slashing, giving the Black Bears another man advantage that they would capitalize on. Keeper dished the puck off to Fossier, who sent it back to Keeper in the slot which he fired over Murray’s blocker, making the Black Bears lead 4-1. Neither team was able to muster a strong enough offensive effort, as both defenses locked down their back ends for the remainder of the period.

Coming out of the second intermission, the Minutemen returned with a vengeance. UMass outshot the Black Bears 19-3, with Pritchard and Chaffee each finding the back of the net over the course of the period. The strong period wasn’t enough to bring the Minutemen back, and the Black Bears won the contest by a final score of 4-3. Swayman had a career high of 53 saves, helping Maine upset the Minutemen.

The Black Bears next contest will be on the road against rival University of New Hampshire Wildcats on Friday, Jan. 31, and Saturday, Feb. 1.