2019 International Dance Fest showcases cultures from around the world 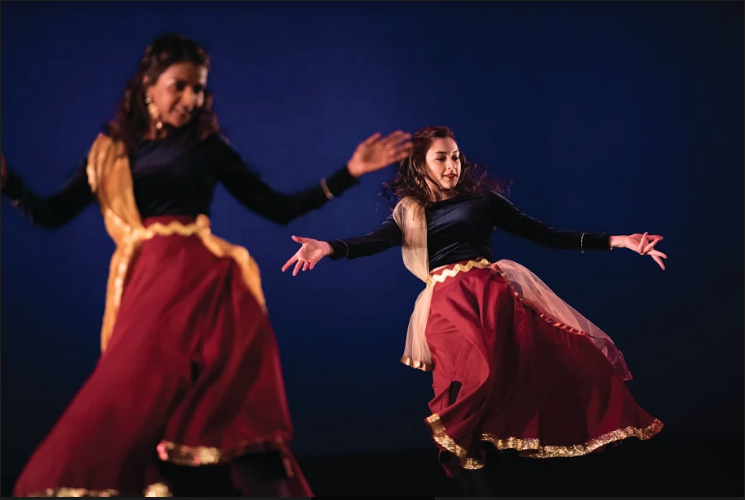 On Saturday, Feb. 16, students, faculty and community members packed into the Collins Center for the Arts (CCA) to watch the 15th annual International Dance Festival (IDF). The festival featured dances from 13 countries, spanning five continents. The dancers showcased traditional music, dance and clothing that represented the diverse community in the Bangor area and at the University of Maine that hosts over 400 international students from over 70 different countries.

“This event is for people to become more aware, educated, and appreciative of the people from countries all over the world that we have in this area, and all the wonderful cultural aspects that come along with them,” Hannah Holbrook, the president of the International Student Association, said.

The IDF started in 2005 when a small group of students performed cultural dances in front of a minimal, but lively audience. Since then, the IDF has continually grown in popularity and size. The event boasted 18 different performances this year, the largest number yet.

The afternoon showing began at 2 p.m. and was hosted by Kristin Vekasi and the 7 p.m. show was hosted by Cheryl Robertson. Both showings highlighted dances from the United States, India, Iran, Japan, Argentina, China, Nepal, Africa, Ireland, Brazil, Sri Lanka and Chile.

The International Student Association (ISA) hosts the event every year in conjunction with the Student Government and the Office of International Programs. They help organize volunteers for backstage, bring in performers and advertise for the festival.

“The real work is done by the dancers. They spend weeks practicing their dances, over and over, making sure all steps and timing are perfect,” Holbrook said.

Most of the performers were students from the UMaine, but some came from Southern Maine and a group named Sheri’s Dancers made the journey from Bar Harbor, Maine. Sheri’s Dancers performed a swing dance representing the United States.

“We are a group of grandmas and great grandmas… we want to bring live dance to the public or anyone who needs it,” Sheri Kean, the group’s president, said. The group has been working off and on together for the past 10 years.

In addition to the work put in by the dancers, the CCA lighting and sound crew, headed by Scott Stitham, spent a significant amount of time preparing.

“(We are) a 35 person crew … we had a tech day early in the week and a dress rehearsal,” Dayle Welch, the backstage supervisor, said. “It took about two full days to put up the lights and work on the timing.”

“The lighting and music have to be timed correctly, and all of the backstage assistants have to spend lots of time in practicing these things as well,” said Holbrook. “It is really incredible what our international community is capable of accomplishing together.”

The performances began with a piece called “Shunki Mushin,” which was inspired by traditional Japanese dance with umbrellas. The next act featured an American tap dance titled “Hundred Acre Woods.” It was inspired by Christopher Robin’s adventures in “Winnie the Pooh.”

The next act was titled “Rangeela” and was one of three dances from India. It was followed by a Tango from Argentina called “Los Fuegos Del Tango.” The fifth performance was inspired by the teachings of Confucius in China. Dancer, Joey Liu, paid tribute to his teachings and philosophies in a solo.

The program then moved on to “The Delightful Dances of Nepal” from the Himalayan region and “Jaan Jaan,” one of two dances from Iran.

In “Mama Africa Soloda Kids-Afro Fusion,” Betelhem Abay performed a solo that is common in Ethiopia. She moved her shoulders in time with the music and drew applause from the crowd. She then joined five other group members in performing traditional African dances.

The final performance of Act I was a Celtic inspired dance. The five students in the performance spent time in Ireland recently, and brought back elements of traditional Irish step-dance infused with modern dance techniques.

Act II began with a clog dance that was made popular in the Appalachian region of the United States. Clog dancing is the state dance in both Kentucky and North Carolina.

The second act was entitled Capoeira, which was developed in Brazil by Africans who were enslaved in the 16th century. Capoeira is one of the newest forms of martial arts. It infuses elements of dance and acrobatics and is improvised, so no dance is exactly the same.

The next act, “Beauty of Sri Lankan Bride,” displayed a traditional wedding dance in Sri Lanka. “Sing, Sing, Sing (With a Little Swing)” by Sheri’s Dancers followed. They performed a swing dance that paid tribute to the United States’ military.

India is home to over 50 different styles of dance. In “Ticket to Bollywood,” Pooja Rawat performed five of those styles in her solo. According to host Kristin Vekasi, Rawat knows 45 out of 50 dance styles from India.

The next dance, called “Gilaki,” hailed from a region in Northwest Iran that harvests rice. This dance utilized several actions that rice harvesters use. The next performance was the final dance from the United States. The hip hop piece titled “Once Upon a Beat” featured old-school hip hop dance moves that energized the crowd.

The second to last performance was from Chile and Easter Island. It began with a dance that could be performed between two partners or between a person and the Chilean flag. It then shifted to a dance inspired by warriors on Easter Island. The costume included a grass skirt and body paint that was typical of male warriors on the island.

The finale, “Bollywood Dhamaka!,” was a dance from India that celebrated dance and the ever-changing styles in India, while still holding on to its traditional roots. Dancers wore outfits inspired by traditional Bollywood costumes and featured more contemporary music.

Sarah Joughin, senior associate director of international programs, closed the show by giving thanks to sponsors, the ISA and everyone else who made the show possible.