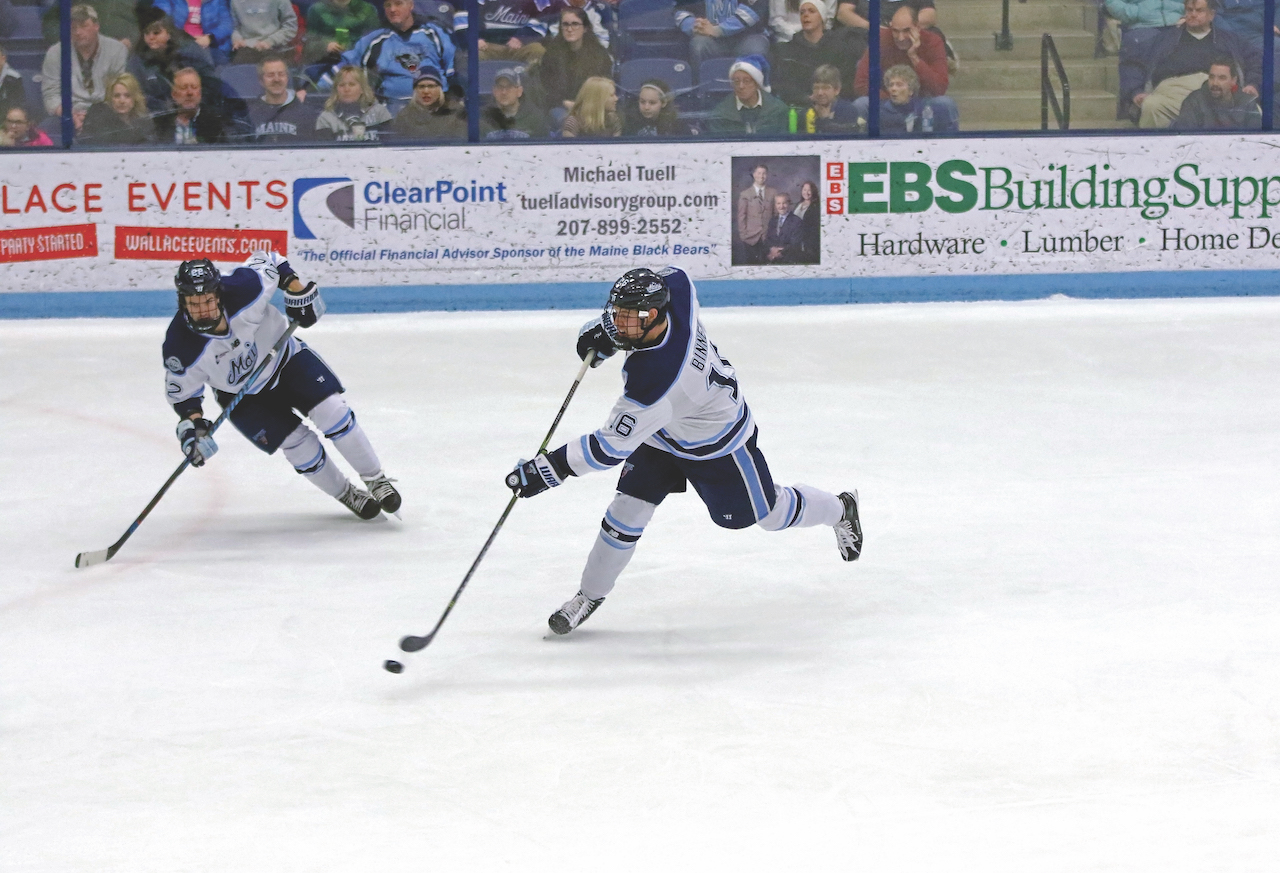 On Friday, Feb. 15, the University of Maine men’s hockey team faced off against the Merrimack College Warriors in a huge Hockey East game. The first period started out with the Warriors scoring the first goal of the game six minutes into the period. First-year forward Chase Gresock found the back of the net on a breakaway chance. Fourth-year forward Derek Petti took off down the blue line and fed the puck to his teammate, who poked the puck past Maine second-year goaltender Jeremy Swayman.

Merrimack held the lead until matching penalties knocked the game down to four man hockey for both sides, but an additional penalty against the Warriors gave Maine the four to three man advantage, which continued into the second period. Merrimack’s defense held strong though, keeping Maine from leveling the score and eventually beat the penalty kill.

Warriors’ third-year forward Logan Coomes picked up a pass from first-year forward Jordan Seyfert and fired from the circle to give his team a two goal advantage midway through the second period. Maine’s response was swift; as fifth-year forward Canon Pieper forced a turnover behind the Warriors back end, then fed the puck out to third-year forward Ryan Smith. Smith clapped the one timer, sending it home past Merrimack’s fourth-year goaltender Craig Pantano. Though Maine had initially cut the Warriors lead down to one, Merrimack responded before the end of the second. Fourth-year forward Michael Babcock deflected a shot from third-year defenseman Johnathan Kovacevic past Swayman to retake the two goal lead.

Heading into the third period, Maine took the pressure of the two goal disadvantage to press forward. Second-year forward Eduards Tralmaks received a pass from third-year forward Mitchell Fossier, then began some fancy puck work to sneak past Pantano to put the Black Bears back to only down by one.

Sitting with a 2-3 disadvantage with a whole period of action left, Maine went to work. After pulling Swayman to the bench and sending out six attackers, Maine tied the game with under a minute left in regulation. Third-year forward Tim Doherty fed the puck to second-year defenseman Brady Keeper, who took off down the ice before sending the puck behind Pantano for the tying score.

Neither team would score as the game went into the five minute overtime period, sending both teams off the ice with another night to win the tied series. Swayman saved 28 shots for the Black Bears, while Pantano tallied 32 saves for the Warriors.

The Black Bears defeated the Warriors, 4-2, on Saturday night inside Lawler Rink.

With Maine giving up the early power play, the Warriors capitalized to gain the advantage four minutes into the contest. Fourth-year forward Alex Carle fired a shot wide of the net. First-year forward Logan Drevitch kicked the puck into the Black Bears’ net. Maine quickly responded with Smith scoring his second goal of the series with just under ten minutes to play in the first. Smith handled the puck off of a pass from second-year forward Emil Westerlund, then buried the puck behind Pantano.

Merrimack quickly retook the lead, as fourth-year forward Derek Petti scored the lone wolf goal to give the Warriors a 2-1 advantage. Off of a Warriors’ face-off win, Petti snagged the puck, then proceeded to beat Swayman in the one-on-one matchup. Less than two minutes later, Maine leveled the score. Fossier took a good shot and hit the ice, but continued to handle the puck before dishing it off to fourth-year defenseman Sam Becker. Becker clapped the puck from the blue line, sending the puck rocketing past Pantano.

After starting the second period with minimal action and multiple penalties, Maine broke the silence 13 minutes in. With a two-on-one advantage, fourth-year forward Brendan Robbins set off the sirens for the sixth time this season. After Shea poked the puck out from the Warriors possession, he passed up the ice to Westerlund, who took off with Robbins towards the Warriors’ goal. Merrimack’s’ lone defender focused on Westerlund,  leaving Robbins alone with second-year goaltender Logan Halladay, allowing him to bury the puck. The Black Bears held a 3-2 lead going into the third period.

With both teams locked in a stalemate over the course of the remainder of the period, the Warriors pulled Halladay and sent out six attackers to try and tie the game. Maine’s strong defensive effort forced the turnover, and Fossier scooped up the loose puck and easily scored. The Black Bears managed to kill a five minute major and a 6-on-4 in the final period to grab two crucial Hockey East points. Swayman finished with 39 saves for Maine, Pantano started the game for Merrimack and stopped eight Black Bear shots, while second-year goaltender Logan Halladay played relief in the second and third period and tallied 18 saves.

The Black Bears will host the Boston College Eagles on Feb. 22 for a 7 p.m. puck drop.