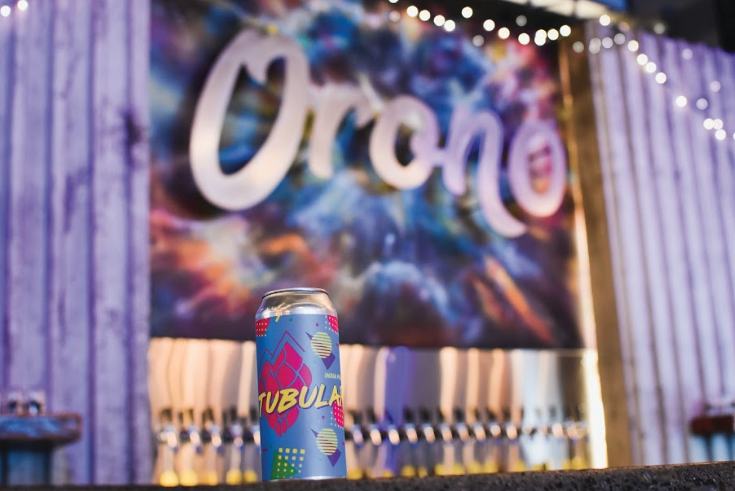 OBC’s Tubular IPA ranked among best in the nation Photo by Anna Foster.

Four years ago, co-founders Abe Furth, Heather Furth, Mark Horton and Asa Marsh-Sachs decided that after working together and brewing beer for Woodman’s Bar and Grill, it was time to dive into the world of craft beers. This inspiration led to the creation of Orono Brewing Company (OBC), now a staple in the college experience for students at the University of Maine, and the creation of Tubular IPA.

“Getting into the beer business just kind of happened for me,” Marsh-Sachs said. “I got out of UMaine Farmington with a degree in 2007 and no real idea of what I wanted to do, other than to find [what] I really wanted to spend my time doing. I managed to score a part-time job in a homebrew store in that area, and found that making beer was going to be a real passion of mine.”

On Oct. 16, 2018, OBC opened their new location at a larger spot on Margin Street in Orono after purchasing the property in July 2017. This location allowed for increased beer production, more seating and the distribution of cans of their product to vendors around the state. Their original location is now used to house their sour beers in order to avoid crossing different strains of yeast.

“At that location, we didn’t have the size to distribute,” Abe Furth said. “We were really focused on making sure that we had enough beer for the tasting room. Every week for three years, we self-distributed, which meant that I was mostly driving around in a van and dropping kegs off at the key accounts that we had. Also, all of these tanks, as well as the catwalk [leading to the fermentors], came from Maine Beer Company for a really great price that allowed us to be the size that we are rather than the size we would have afforded to be if we were buying new.”

Among those accounts were approximately ten locations in areas such as Sugarloaf, Portland and Brunswick.

“[We went from] really just 20 kegs a week as opposed to now, a much bigger scale,” Abe Furth said. “Right now on any given week, we’re sending out about 100-200 cases and 100 plus kegs. The kegs being used now are bigger, so there is more beer being transferred than ever before.”

The new location has allowed OBC to expand their buyers and get their IPAs out to a larger variety of spots around Maine.

“If we’re really strong in Orono, that means that we’ll be really strong in the rest of the state,” Abe Furth said. “Every year, thousands of students travel to other parts of the world and around the state and they bring us with them. Whenever we do events in Portland or at Sugarloaf or even New York City, a bunch of UMaine grads show up. That’s a big part of our popularity throughout the state.”

OBC is open every night of the week at both their Orono and Bangor locations. In Orono, they serve a select menu with their most popular IPA’s on tap, in addition to original OBC merchandise. Among one of their most popular IPAs is Tubular, which was named one of the 34 hottest IPAs in America right now by Thrillist.com. The beer was created by Marsh-Sachs.

“[I was] so stoked! That list is stacked with so many of my favorite beers,” Marsh-Sachs said. “It was really fun to be a part of [the list].”

The OBC team credited their teamwork for much of their success in addition to their use of high-quality ingredients.

“Thrillist is cool, they have five and a half million Facebook followers,” Abe Furth said. “That’s a huge deal. I think that there’s such a hotbed of really strong breweries in Portland and it’s particularly special that we’re bringing it to Orono. To have recognition in Orono is great because we all know each other because of the University of Maine.”

“100 percent of Tubular is made and packaged here,” Abe Furth said. “So much of the beer is behind-the-scenes, the lab work, the cleaning, the meticulous note-taking so that you can make it the same every time.”

Thrillist describes the Tubular IPA as having “bright citrus and grassy notes balanced by flavors of ripe red berries and stone fruit with just enough perceived bitterness to create a smooth experience from beginning to end.” The location, according to the article, is a large contributor to the experience, stating that Maine is the place for craft breweries with an influx of young brewers and talent. The Tubular can is colorful, resembling a 90s “Saved By The Bell” look, the article states.

Furth agreed that having the best ingredients is crucial to having a successful recipe.

“It’s such a competitive landscape that we have to put a lot of hops into it to get the flavor and hops are expensive. All of our beer features some of the grain that’s grown in Maine, which is also a lot more expensive than Canadian grade or even grain from Europe. We end up spending extra to get the best ingredients that we can to allow Asa to make the best beer possible,” Furth said.

However, quality ingredients are not the only key to success that the team has found.

“It all starts with Mark, Heather and Abe,” Marsh-Sachs said. “I couldn’t be more fortunate to have met them when I did and have been taken up into their world. We trust each other and complement each other so well. That being said, this brewery team I have out back is ridiculously talented, a bunch of brewery rockstars.”

“We have a great small team of four people that do everything from brewing to packaging,” Abe Furth said. “We’re very lucky, there are other breweries that are about our size that have a lot more people, so we’re lucky that we have four people that work very well together and are very experienced. All of them have brewed systems similar to this in size as assistant or head brewers themselves. We just got very lucky when they decided to come along and join what Asa has created here.”

Marsh-Sachs and Furth are referring to Parker Hall, Forrest Brown and Brooks Matthews, who are part of the brewing and canning process.

“They all share the same passion and commitment to making the best beer possible, geeking out about it, and having a damn good time doing it. We love it,” Marsh-Sachs said.

“So much of it is the love and care that our partner Asa and his crew have put into it,” Abe Furth said. “Asa had extensive background running home-brew stores for about a decade before we opened the brewery, so he has his really deep knowledge. Making beer is a part of him. So, when he developed this recipe, he accumulated years and years of work that he put in. He’s always said how every little thing matters, so it’s a bunch of small details that add up to a really good-tasting beer.

For now, the team is content with the progress and production that is currently underway at their Margin Street location. Furth hopes to start producing more of their products locally, which is sometimes difficult with a competitive market and with trademarks that local farms are under. However, they are comfortable with their locations throughout the state of Maine.

“We are frequently asked about when we will go on to New Hampshire,” Abe Furth said. “Because of the size right here, because we’re strong in Maine, [we are producing] the perfect amount of beer for Maine and the less than one percent that we’re able to take and go elsewhere is being done as a marketing thing. It’s really good for us to be exposed to larger markets and it’s fun adventuring and exposing OBC to people that have not had it before. It tells a story about the brand, too.”

“While the business continues to grow, the team really helped us become the brand that allowed us to grow,” Abe Furth said. “Those people are always going to be part of what we’re doing in those areas and always be a big part of it.”

For craft beer fans, OBC is in the process of creating new stouts to be released within the next few weeks. The Orono location hosts “Trivia Night” every Wednesday night beginning at 8 p.m. The restaurant is colorful and cozy, clad with a woodstove and community seating as well as an upper level for more seating and entertainment accommodations. If you’re looking to try something new, gather a few friends and head over to 61 Margin St. to try their Tubular IPA and a plate of their buffalo tater tots in front of the fire. OBC is bound to become a part of the college experience that you can take with you wherever you go.