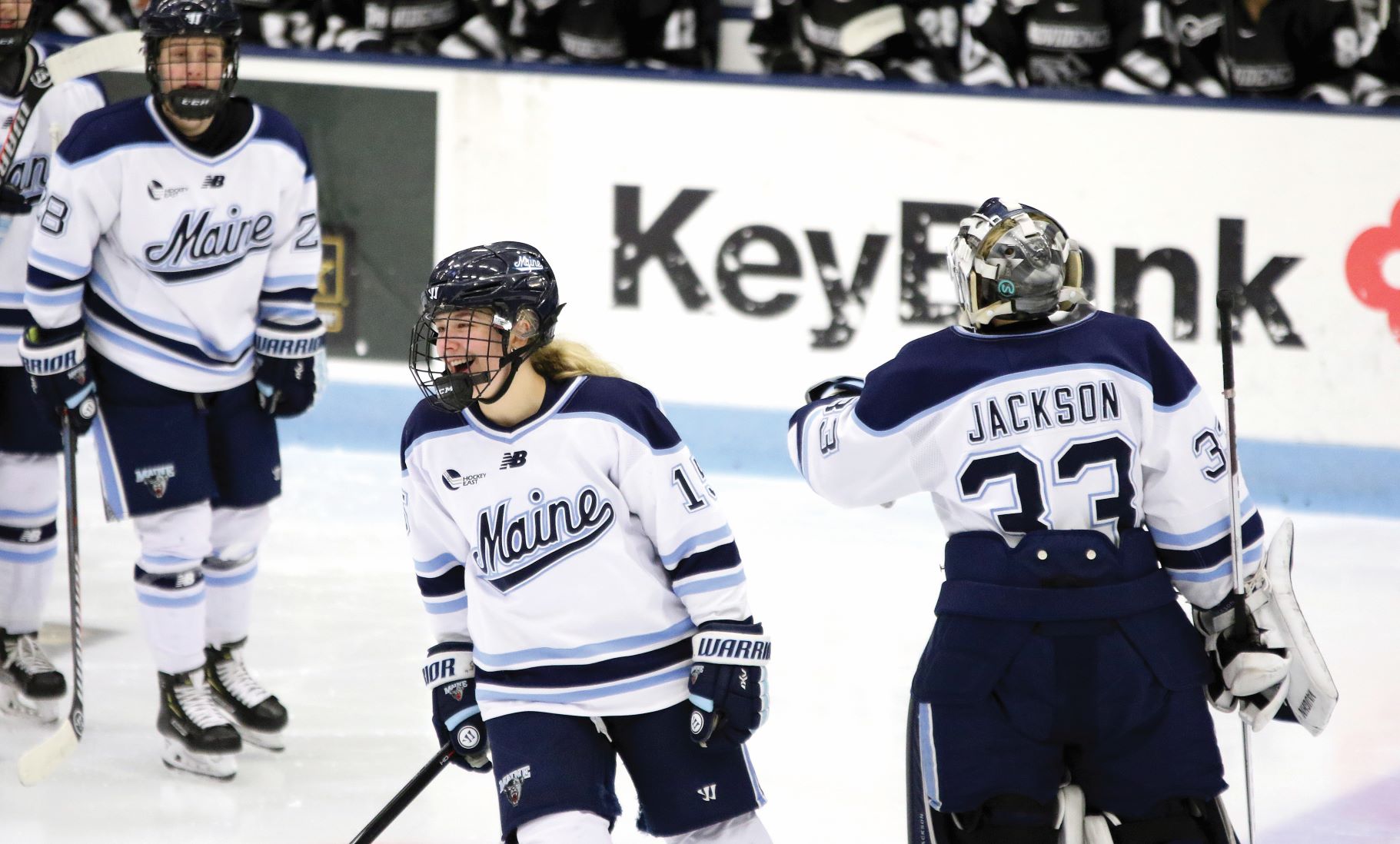 On Friday, Feb. 8, the Black Bears fell to the Friars 2-1 in a tight Hockey East contest. The first period started out with the Friars getting on the board in the first five minutes. The Friars capitalized on the game’s first power play opportunity to open the scoring on the afternoon. With players pressuring down low, third-year defenseman Avery Fransoo fired a shot from the point that was kicked out for a rebound, which was handled and put up for another shot by fourth-year forward Christina Putigna. Putigna’s shot was kicked back out to an open third-year forward Meghan Rickard at the side of the net for her fifth goal of the season. Providence outshot Maine 11-7 in the first period keeping their momentum going into the second period.

The Black Bears responded three minutes into the second period when, second-year forward Daria Tereshkina stepped up along the boards to keep the puck in the offensive zone, and chipped it down to third-year forward Vendula Pribylova at the half boards, where she fired a crisp pass across the slot to a wide-open first-year forward Celine Tedenby to put away her 11th goal of the year. Maine had a power play late in the seconded period but could not capitalize. The Black Bears outshot the Friars 7-5 in the frame and ended the period in a 1-1 tie.

Coming out of the intermission, the Friars broke the 1-1 tie five minutes into the period when, while on the penalty kill, Providence forced a turnover in Maine’s end. Second-year forward Maureen Murphy corralled the loose puck and sent a pass to fourth-year forward Christina Putigna, who fired a shot over Maine’s third-year goalie Carly Jackson’s shoulder and gave her squad a 2-1 lead for her second point of the afternoon. The Black Bears could not find the back of the net as the Friars played excellent team defense. Maine’s third-year goaltender Carly Jackson finished with 19 saves on 21 shots, while Providence’s fourth-year goaltender Madison Myers stopped 24 of 25 shots.

On Saturday afternoon the teams faced off again, this time resulting in a 2-2 tie. The Friars went on the penalty kill under five minutes into the contest, but Providence was able to kill it off, and ended up with the best chance of the two minutes as third-year forward Avery Fransoo streaked in on a breakaway but could not finish at the net. Near the midpoint of the period, the Friars rang a couple of shots off the post, and Maine ended up hitting a post late in the period as well but could not finish.

First-year forward Celine Tedenby, who scored for the Black Bears yesterday, made it 1-0 for the Black Bears one minute into the second. She picked up a turnover, skated into the bottom of the left circle and fired a shot over Myers’ near-side shoulder. Providence wasted little time creating a response as first-year forward Sara Hjalmarsson played it from the corner to third-year forward Neve Van Pelt. She was able to knock it in at the back post to make it 1-1 just two minutes later.

Maine had back-to-back power plays in the middle of the second period, the first of which was killed by the Friars, and the second paying off for the Black Bears off a shot from fourth-year Cailey Hutichinson to give Maine the 2-1 lead. With only two minutes left in the second period, Rickard scored her second goal of the weekend and sixth of the season to tie the game 2-2. The third period featured back-and-forth action with Maine holding a slight advantage in shots on goal, 10-8. Jackson made eight saves while Myers made 10 saves in the final period to help force overtime. Providence dominated during overtime, leading 5-2 in shots on goal. The Friars closed the game on the power play, but were unable to find a game winner. Jackson finished the game with 25 saves while Myers finished with 24 saves.

The Black Bears (14-13-4) will face Boston College in a huge Hockey East series on Thursday, Feb. 14th and Friday, Feb. 15th at The Conte Forum in Chestnut Hill, Massachusetts.