#YouMaine: Connection through story and service with Emma Hutchinson

Home /Culture/Profiles/#YouMaine: Connection through story and service with Emma Hutchinson 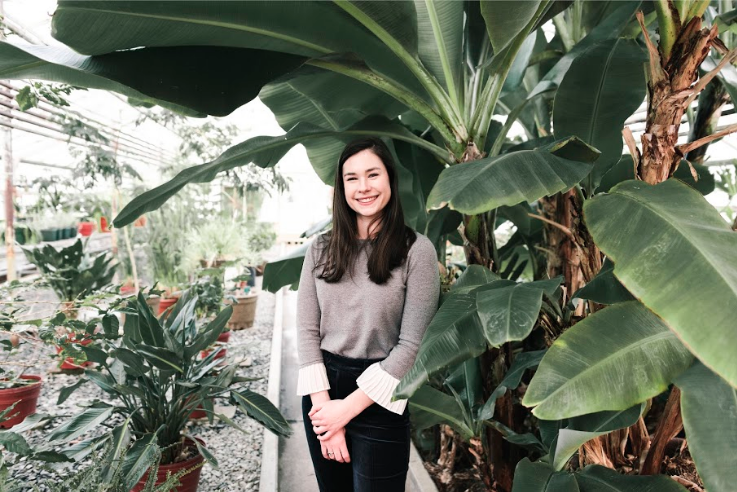 When Emma Hutchinson arrived at the University of Maine four years ago, she was unsure of her place in the UMaine community. Now as a tutor in the Writing Center, a member of All Maine Women and an active member in the Honors College, she has made a significant mark on campus.

“My freshman year I came in undecided. I’ve always had this deep love for the liberal arts, writing, English and history. It all stems back to my deep love of stories,” Hutchinson said.

Hutchinson was drawn to UMaine by her interest in the Honors College. She loved the idea of reading a book a week and discussing it in detail with like-minded students. After her first honors class, she felt cemented at UMaine but it wasn’t until she took a course on Norse sagas and myths that she decided to major in English.

“I’ve always loved mythology and the old stories people tell themselves,” Hutchinson said. “The idea of learning about another culture’s stories was so cool because it was a whole new set of stories and characters and you learn about the reasons behind them.”

Hutchinson believes that studying English not only provides insight into the past but also allows us to create a deeper connection with others.

“Writing is political,” Hutchinson said. “I’m doing my thesis on children’s literature and I’ve been reading about all the different factors and choices, conscious or unconscious, and different biases that get put into the stories we tell. I think it’s important because we can learn about each other and understand each other better, grow as people in some small way and lessen our fear of other people. I think it’s important to continue learning and expanding our horizons.”

As a child, Hutchinson was fascinated by the quirky and nonsensical. She was drawn to books like Roald Dahl’s “The BFG” and Daniel Handler’s “A Series of Unfortunate Events,” written under the pen name Lemony Snicket, because of the sweeping adventures and the power and autonomy placed in the hands of children.

“I also loved the idea of the BFG, this big friendly giant who would give you good dreams at night. I really wanted to believe in that when I was little so when I woke up and could remember my dreams, I would run to my parents and tell them the BFG had visited me,” Hutchinson said.

Hutchinson says she was always “the clumsy one” growing up, finding herself in many scrapes and situations. She has felt the closest to being in a Roald Dahl novel when traveling abroad in Europe, but has more frequently related to her childhood heroes when facing obstacles which she had to outsmart to overcome. The most transformative of these obstacles came in the form of a text message.

In the spring of 2017, during Hutchinson’s second year at UMaine, she decided to get involved with the Maine Day Meal Pack-Out. As Maine is the third worst state in the country for food insecurity, the goal of the event was to surpass Harvard University and set the record for meals packed by a U.S. university during one event. The event was an overwhelming success, where over 250 volunteers packed 107,500 meals which were sent to food banks and shelters around the state, breaking the record.

Hutchinson’s role as a team leader in this event inspired her to join the packing committee for their 2018 event, allowing her to play a more intricate role involving months of planning and organizing. On the morning of the event, Hutchinson received a text message alerting her that the event’s leader would not be able to make it and that the task of running the event was now up to her.

“I think it changed me. It really proved to me that I have what it takes to be a leader. In that moment of crisis, you step up and take charge and you do what needs to get done,” Hutchinson said. “There is a huge need in Maine. In the back of my mind, especially this year, is that this event is the single largest and most impactful thing I can do for my community in my college career, and maybe ever. It’s incredible to know that I am playing such a big part in doing so much good. It doesn’t really sink in until you see all those boxes stacked up.”

As Hutchinson gets ready for this year’s event and her final Maine Day Meal Pack-Out before graduation, she sees how her involvement with philanthropic events has allowed her to create the ties she cherishes with UMaine.

“Standing shoulder to shoulder and packing those boxes is really a time to get to know your community members,” Hutchinson said. “It’s wonderful to feel more connected and feel like you have a stake in your community.”

After she leaves UMaine, Hutchinson is unsure of what adventure will come next. With her, she will take her love of storytelling, a heart of service and newly found leadership skills.