Concert for a Cause showcases UMaine Concert Band 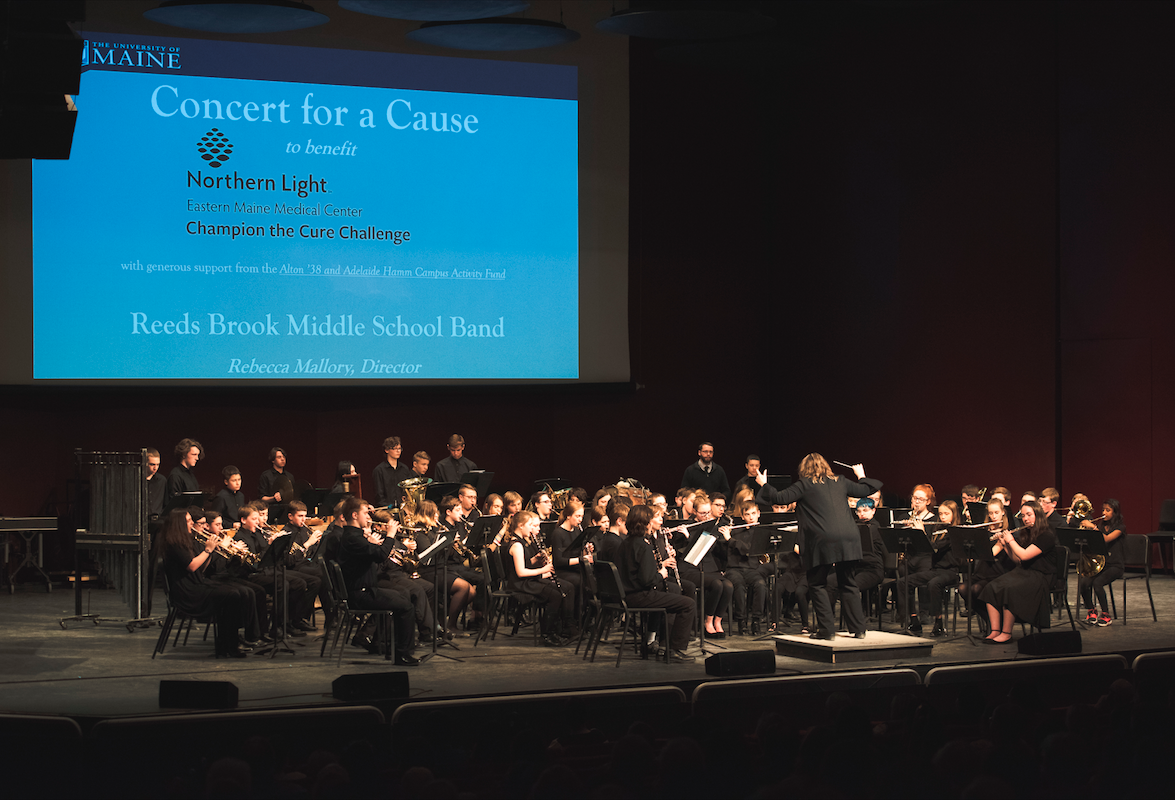 On Tuesday, March 12, the University of Maine Concert Band performed at their Concert for a Cause event along with the Reeds Brook and Leonard Middle School bands at the Collin’s Center for the Arts. Starting the event, Reeds Brook performed two pieces, followed by Leonard Middle School with three. The University Concert Band then took the stage to perform three pieces; “Volatus,” “A Song of Loudest Praise” and “Fate of the Gods.” The final piece of the night brought the three schools together for a combined ensemble to perform, “Call of Champions.”

Throughout the night, donations were taken in support of cancer research. For many, including UMaine’s own Phillip Edelman, the Concert Band conductor, this concert held a lot of personal weight, making for a powerful and emotional evening.

“Everybody I know has been affected in some way by cancer themselves or in their close personal network. I am not a medical doctor, so I wanted to be able to ‘hit back’ in the only way that I know how,” Edelman said.

The process of planning the concert wasn’t an easy task, and there was much trial and error before the final selections were chosen. The band performs with a wide array of instruments including drums, clarinets, saxophones, oboes and a bassoon, which means there are a lot of moving parts to coordinate.

“This was a team effort,” Edelman said. “The band played through a number of pieces before we decided which ones we would perform at the concert. The final massed piece was chosen with the two middle school directors. On top of that, all of our pieces had different challenges. One was difficult because it journeyed through many keys and time signatures, one was difficult because of the depth of emotion that it took to play it convincingly.”

Despite the emotional and compositional difficulties of the concert, Edelman and his students managed to rise to the occasion and delivered a strong performance for the hundreds of people in attendance.

“The hardest part about conducting a band this size is trying not to be so overcome with happiness and awe at the students in front of me that I forget to actually continue conducting,” Edelman said. “It’s hard to watch your students inspiring younger students and not be overcome with pride and gratitude. My students really are something else.”

In addition to helping raise money for cancer research, the Concert Band achieved a performance goal by playing “A Song of Loudest Praise,” a piece that Edelman and his students have wanted to play for a long time.

“It’s really one of the most beautiful compositions I have ever heard and I’m so happy that we were able to play it at the concert,” Edelman said.

For more information about the UMaine’s School of Performing Arts (SPA), the UMaine Concert Band and other events taking place at the Collins Center for the Arts, visit the SPA website at UMaine.edu/SPA and check out the Facebook pages of the various groups and bands.

For more information about Concert for a Cause, and the cancer research that this concert raised money for, check out ctcchallenge.org.