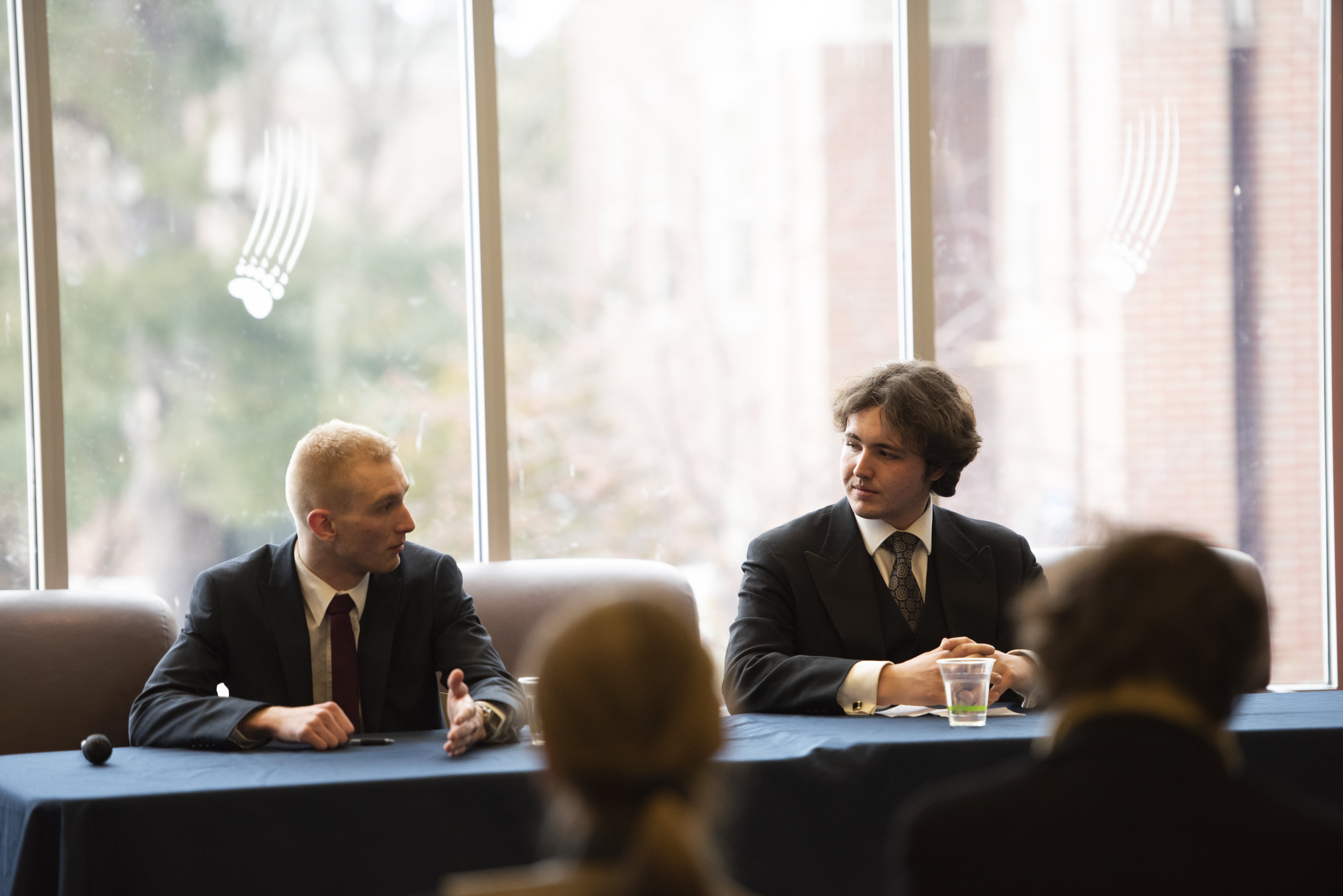 The two candidates, third-year political science and economics student and current senator, Harrison Ransley, and third-year marine science student and current vice president, Bentley Simpson, were given the opportunity to make a case for their candidacy and to answer questions from their fellow students. The event was two hours long and was attended by UMaine students and faculty.

Matthew Akers, a third-year biology and pre-med student and the FEPC chairman, served as the debate moderator. Four neutral panelists were chosen by Akers to ask previously submitted questions for the candidates. These questions, chosen by Akers, covered a variety of topics ranging from first-year retention rates to potholes on the university’s roads. Each candidate was given two minutes to provide an answer. By approximately 6:30 p.m., Akers began to allow spectators to ask questions, and after another 30 minutes, the debate ended.

“I feel it was very well structured and that the debate itself was productive,” Ransley said. “It even felt more like a conversation than a debate at times.”

“I did like that [Akers] flipped who answered questions first,” Simpson said. “I certainly felt that I had an advantage when I was the second to answer a question because it gave me time to jot down my main points before speaking.”

When asked if they had been able to say everything they wished, the two candidates offered mixed responses.

“I wish I could have talked more about [the Student Conduct Code Oversight and Review Committee] and why it is important. I know my friend Simpson … talked about why it’s unnecessary and I feel I never really got the opportunity to give specific changes and examples as to why the student body really needs this,” Sen. Ransley, who is also the chairman of the Senate’s Student Code of Conduct Committee, said.

“I wish there had been some questions on personal leadership styles: our perceived weaknesses, perceived strengths, values, etc,” Simpson said.

Since Simpson will be unable to return to the position of vice president next semester, he explained that should he not win the presidency, he may apply for an officer position or return to serving as a student senator.

“If I don’t win, it is more likely I end up on the senate, because it’s the second-best opportunity to show the senators how much power they really have and groom the younger senators for higher office,” Simpson said.

Sen. Ransley said that he intends to remain part of Student Government no matter the role.

“I really enjoy what I do and the work with Student Government for the students,” Ransley said. “If I don’t win it may impact my projects and the needs of the students I’m trying to help, but I’ll stick around and keep working on it no matter what.”

Dana Carver-Bialer, a coordinator of leadership development at UMaine, was one of the debate’s four panelists.

“It was a privilege to help facilitate the UMSG Presidential Debate,” Carver-Bialer said. “Vice President Simpson and Senator Ransley both exemplified innovative ideas and undeniable passion for serving UMaine’s students.”

“I was pleased to be part of such a respectful, informative and fair forum that allowed the undergraduate student body to learn more about these two thoughtful and engaged candidates for Student Government president,” Wilson said. “I think that an undergrad with no information about the candidates prior to the debate would have gained a fairly good understanding of their approach to governance, leadership style and priorities and been able to select a candidate.”

The debate’s audience included a significant number of student senators who were interested in the election.

“I think the debate questions were fair and both candidates were given an equal shot,” Emma Willey, a second-year media studies student and student senator, said.

As chair of the Senate’s Services Committee, Willey is responsible for improving student services across campus, and she thinks that either of the two candidates will be able to help her in this capacity.

“As a senator, I believe both candidates are fully capable of taking Student Gov. to new heights next year,” Willey stated.

Akers said that he thought the debate went well, and the only change he would make would be in the timing of the debate to make it more convenient for students to attend.

“I think that the debate really showed that we have two great options for the president and the student body is going to have a tough decision to choose between these two qualified candidates,” Akers said.

With little more than a week left in the election, each candidate will need to spend their spring break tirelessly campaigning.

“I’m just going to try to get the word out, present to groups, and have a strong social media presence,” Ransley said. “I’ll also spread the word of [the Student Conduct Code Oversight and Review Committee] because this campaign, no matter what, can help that project and it is something that students really need across the whole system, not just here.”

Simpson, when asked for his plans, replied that he intends to “keep pushing via word of mouth.”

On March 25, voting for the new president will be available for students online through the student portal and in person in the Wade Center in the Memorial Union until 5 p.m.

The inauguration ceremony for UMaine’s newly elected student body president will be held on April 30 in the Memorial Union.