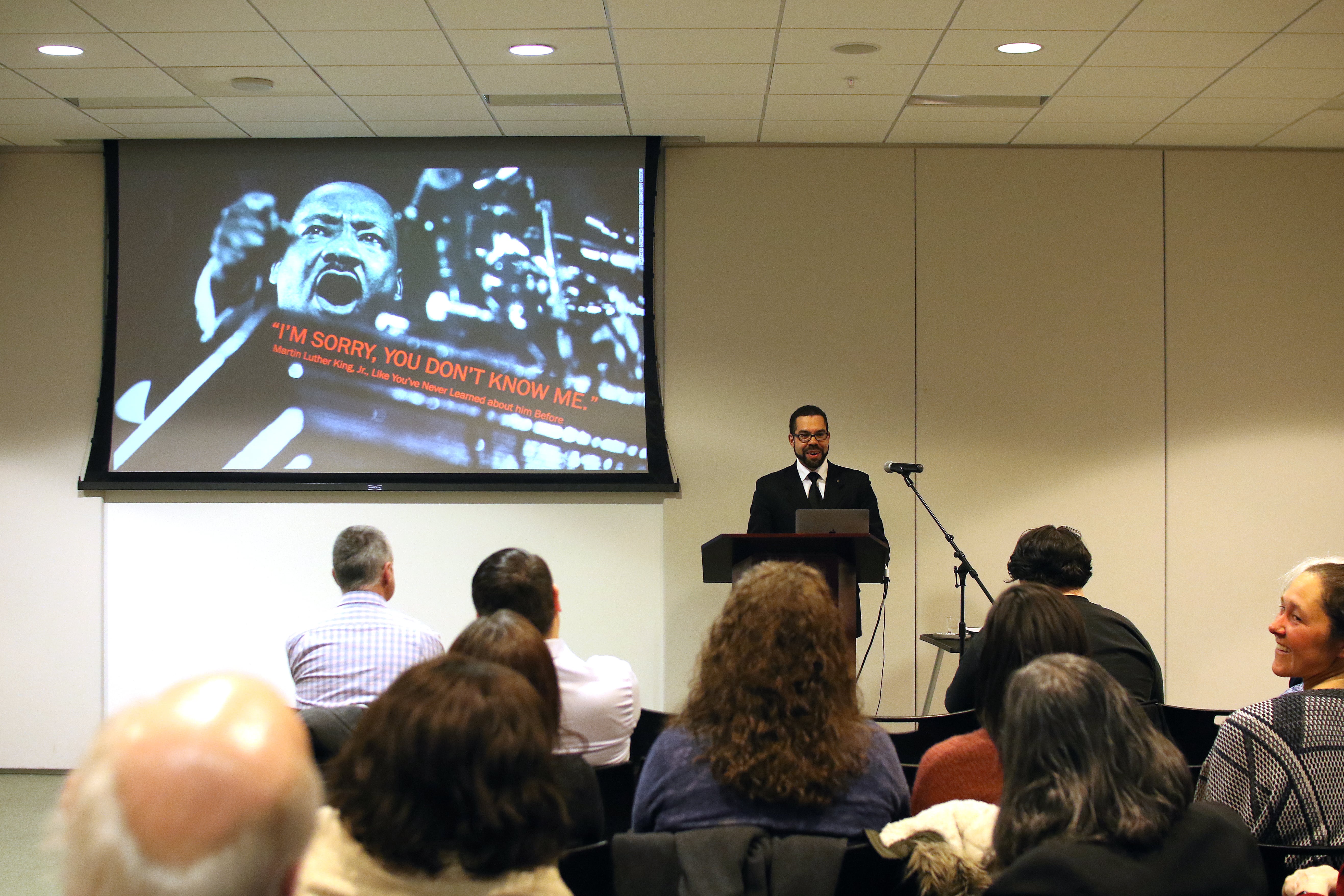 The Maine Peace Action Committee hosted the annual Howard B. Schonberger Peace and Social Justice Lecture on March 7. The talk, delivered by Geoffrey Canada Associate Professor of Africana Studies and History at Bowdoin College Brian Purnell, was titled “I’m sorry, you don’t know me: Martin Luther King, Jr. like you’ve never learned about him before.”

Purnell covered the lesser-known aspects of Dr. Martin Luther King Jr., mainly his roles as a labor-rights activist, an anti-war, pro-peace mobilizer and a black Christian minister in the south.

Purnell asked the audience to shout out the first ideas about King that popped into their heads. As he expected, the majority of the interjections concerned the civil rights movement, including the March on Washington in 1963, the Selma to Montgomery March in 1965 and King’s famous “I Have a Dream” speech. There were also a few mentions of marital infidelity and the plagiarism controversy surrounding King’s doctoral dissertation.

After the brainstorming session had ended, Purnell launched into his section of the lecture covering King’s involvement in labor rights and the fight for a fair minimum wage. He described how King was often more concerned with equality between classes than between races. After all, when King was assassinated in 1968 in Memphis, Tennessee, he was visiting to support striking sanitation workers protesting low pay and dangerous working conditions.

The title of the lecture was derived from a quote of King’s: “Someone said to me not long ago, it was a member of the press, ‘Dr. King, since you face so many criticisms and since you are going to hurt the budget of your organization, don’t you feel that you should kind of change and fall in line with the Administration’s policy? Aren’t you hurting the civil rights movement, and people who once respected you may lose respect for you because you’re involved in this controversial issue in taking the stand against the war.’ And I had to look with a deep understanding of why he raised the question and with no bitterness in my heart and say to that man, ‘I’m sorry sir, but you don’t know me. I’m not a consensus leader.’”

This quote detailed a central idea of King’s steadfast anti-war sentiment. Purnell told the audience that once King came out full-force against the United States involvement in the Vietnam War, he lost all political capital. The government and most people in the United States turned against him, but that wasn’t important to his drive.

Purnell also explained that while King was one of the most influential orators and mobilizers in human history, he was not a good organizer.

“He went to jail a lot,” Purnell said, to laughter from the audience.

He stressed the importance of the support and leadership from people like Coretta Scott King, author, activist and civil rights leader.

Howard B. Schonberger was a history professor at the University of Maine in the late 20th century. An activist for democratic socialism and worldwide democracy, Schonberg’s legacy is remembered in this annual lecture series that bring speakers like Purnell to campus to discuss topics on U.S. foreign policy, colonialism, imperialism and social justice.