Socially Relevant: Adam Barr speaks to UMaine students about his experiences as a television writer 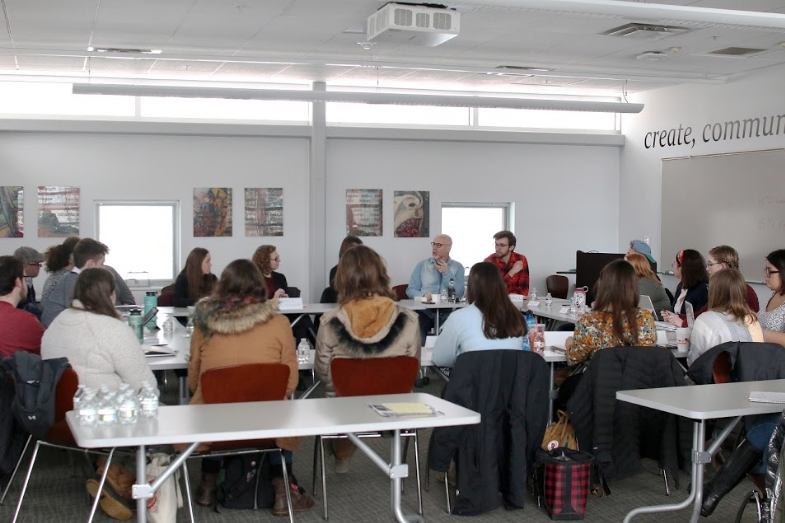 On Saturday, March 2 Barr lead a workshop which gave students insight into how to develop a television show pilot. Photo by Matt Lavole.

Adam Barr grew up in Lewiston, Maine where his parents were deeply involved in the community. Through their work, they got to meet with people from different races, religions and socioeconomic backgrounds. His mother worked for a non-profit organization that provided education and job training to developmentally disabled adults and his father was a salesman that drove all over the state to meet clients. Barr often accompanied his father on these visits which took them all over the state to visit clients’ farms, businesses and homes.

From these trips, Barr learned how to see people and to care about their stories as his parents did. Barr gained a passion for knowing people deeper, who they were, how they live and how they hurt. Most importantly, he wanted to know what was funny about them. On one visit, he recalled his father selling calendars to a husband and wife who owned a slaughterhouse in Turner, Maine. Standing with them in their living room, flipping through calendars, he noted they were still wearing their blood-stained aprons from work. Barr, talking to a crowd at Wells Conference Center on Friday, March 1, said he is inspired by peoples’ unique quirks.

“And in Maine,” Barr said. “There is no shortage of quirks.”

In high school, Barr had teachers who encouraged his love of the humanities. He enjoyed theater, Shakespeare and Robert Frost. His parents would drive him to chamber concerts or to the library to further cultivate his love of reading and writing.

It was not until college that he decided to pursue a career in screenwriting. His friends, who had already graduated, told stories about writing for shows like “Saturday Night Live” or “Fresh Prince of Bel Air.” This nudged him to start writing scripts.

Since becoming a writer and moving to Los Angeles, Barr has worked on television shows like “Will and Grace,” “The New Adventures of Old Christine,” and a comedy news show called “Not Necessarily the News.” He also works within the community, volunteering and helping students develop their own passion for writing.

The University of Maine Stephen E. King Chair in Literature Caroline Bicks brought Barr to UMaine to discuss his story and the relevance of his work as a writer. As the King Chair, Bicks works to promote literature and the humanities at the University. The goal of her lecture series is to bring people to campus that are using their humanities backgrounds to make a difference in the world.

“I knew that Adam would be perfect for this series because he is using his talent as a writer and storyteller to address larger social issues in a medium that reaches millions of people,” Bicks said. “He and the writers he works with have to think every day about how to find the right words and scenarios to address difficult but timely problems.”

Since the reboot, Barr and his fellow writers have continued to discuss relevant topics like race, gender, sexuality, age, body image and sexual assault.

In writing about relevant topics, Barr hopes to begin a discussion among viewers. During the original seasons of “Will and Grace,” Barr would read letters from young fans thanking them for sparking the conversation about the LGBT community. These fans were able to start to talk to their families about their sexuality because they were able to relate to the comedy.

Since the reboot, the writers still work to create a conversation among viewers. By discussing socially relevant topics, they hope that fans can bond over the comedy and talk about hard topics.

“I don’t pretend that television has the power to heal all wounds … But they demonstrate that tv can serve a purpose beyond mere entertainment,” Barr said. “I’ve turned down a lot more offers than I have taken. I have no interest in a project that is simply entertainment for entertainment sake. For me a show has to shine some light on the human condition, and I have been lucky enough to work on the shows that I have.”

During his series of visits at UMaine, Barr was able to interact with students from diverse parts of campus. He spoke to students in the Maine Business School, the English Department, School of Performing Arts and more. By connecting with these students, he was able to share his own experiences and discuss how Hollywood can stay relevant.

In addition to his lectures, Barr hosted a workshop to help writers cultivate their ideas. His workshop taught students how to think about character development, how to create a narrative, and how to tell a compelling story while considering the marketability and audience of their work.

Barr believes that with good writing, television can help start conversations about hard topics and create relatable experiences for diverse audiences. Hollywood will only remain relevant as long as writers continue to promote diverse casts and socially relevant topics. With that, audiences can become more aware of social topics and can work towards a broader understanding of issues that they face in society today.