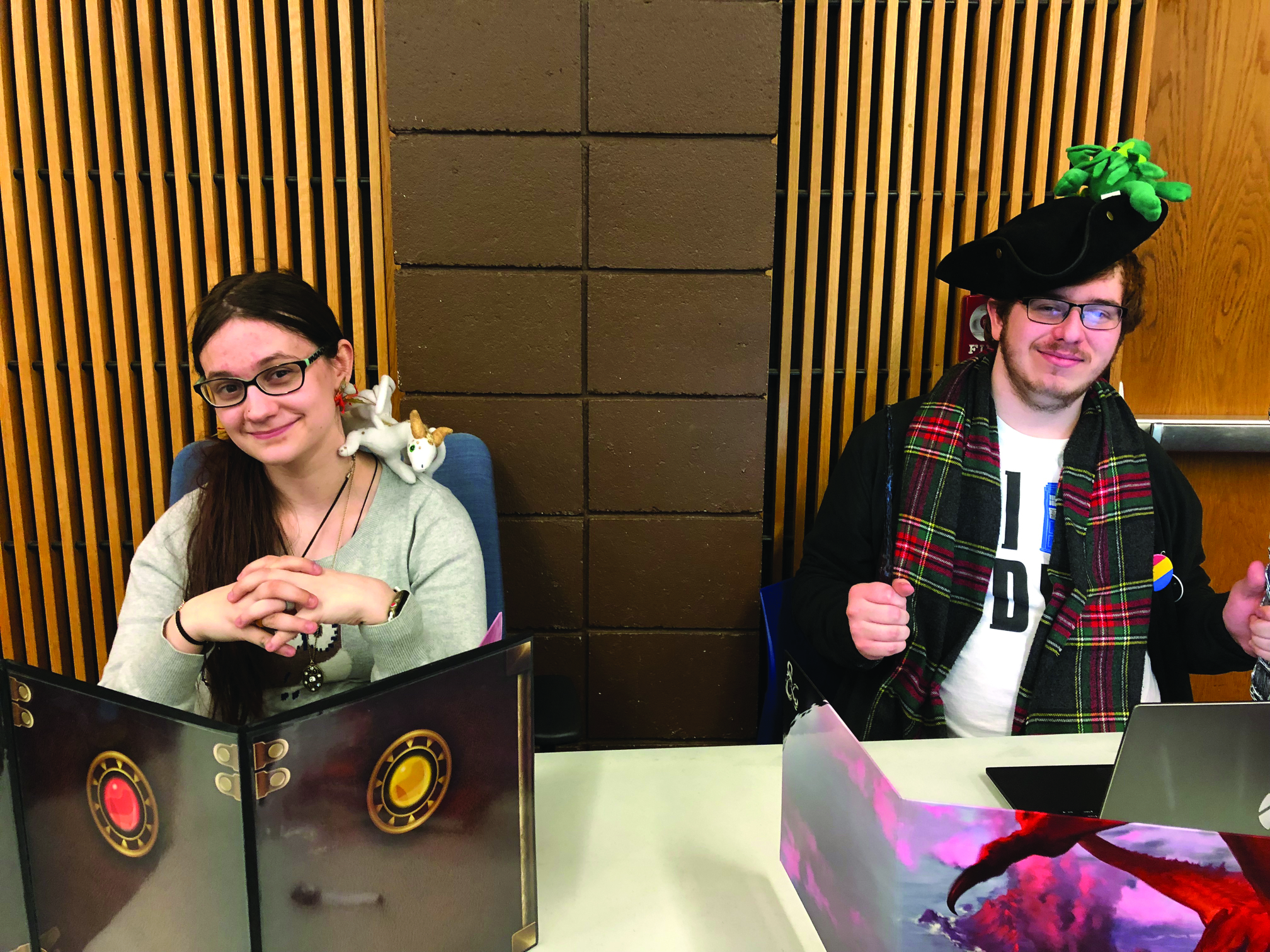 On Feb. 19, the president and other members of the University of Maine’s Dungeons & Dragons (D&D) Club petitioned the General Student Senate for their club’s final recognition. Being formally recognized by the Student Senate is the latest achievement in the saga of what has become both the largest and fastest growing club at UMaine.

Since the club’s beginning during the fall semester of 2017, when it could list only 15 people on its roster of members, the D&D Club has quickly and astonishingly grown, and has now generated trademark amounts of member enthusiasm.

D&D Club’s President Cameron Bowie, a fourth-year history and political science student and Student Government senator, said that he is as amazed by the rapid growth as anyone else.

“We noticed extreme growth after our tabling event at the fall exhibition of clubs out on the campus mall,” Bowie said. “We got 147 signatures from that event if I recall correctly.”

According to Bowie, the D&D Club has grown to be not only the largest in-person “Dungeons and Dragons” gathering in Maine, but the largest of its kind on the East Coast. The rapidly increasing number of players has required the club to use more than one classroom for weekly meetings, and a request by the club to move from room 107 in the Donald P. Corbett building to room 100 of the same building was recently approved by UMaine faculty.

“Once our club had the massive increase in membership from … fall it’s been a lot of word of mouth among our players and now every Friday we basically take over the Commuters Lounge along with most rooms in the DPC,” Lars Johnson, a fourth-year survey engineering student and the club’s internal communications director, said.

Although it has grown quickly, the D&D club has been able to remain relatively well organized.

“We have a couple tiers of sorts,” Johnson said. “Executive positions, our senate, DMs and our player base.”

The DMs that Johnson mentions are the club’s “Dungeon Masters” and their task is not a simple one. Each DM is responsible for overseeing a group of players that average between seven and eight people. It is up to the DM to narrate new adventures that will continue a game’s progress.

“It was pretty common that those DMs who really dedicated themselves to making sure all players had something to do, could be DMing for 20 [plus] hours a week, with a few going over 30 hours,” Johnson said.

Bowie, who is also the club’s “grandmaster,” said that he is honored and humbled to serve it in such capacity.

“To have the trust and confidence of intelligent, creative and witty individuals is more than I deserve, and I give 30-40 [hours] of my week to the club to try to be a touch worthy of that confidence,” Bowie said. “The role means I administer to the club, in this function I draw on my training as a historian more than anything. Our executive board is based on the Star Chamber privy council in England and works very well. Other aspects of administration I craft from my time as a [Student Government] senator, basing mechanism on Senate function.”

Both Bowie and Johnson have taken pride in the club’s economic prudence and its support of local businesses. Bowie, himself a lifelong Orono resident, explained during a speech to the Student Senate that the club does not charge membership dues and that almost all its money has been raised internally. He also stated that the D&D Club has become a regular patron of nearby restaurants, especially the Orono House of Pizza.

“I know for a fact that we have already recruited a couple of delivery drivers from the surrounding businesses, and this of course has been without any funding,” Johnson said.

Throughout its growth, the club has attracted players from every level of skill and dedication. Claire Lupien, a third-year chemical engineering student who describes herself as a “fairly casual player,” explained how the club’s format allows students to play for as much time as they are able.

“No matter how much stress or homework you have piling up, you can always take a few hours off to scream and throw dice at things to let a little steam off whenever you need to, because the unique setup means that there will always be people looking for a game,” Lupien said. “I love playing with this group because you can commit exactly how much time you have available, and you always get the same reward.”

Lupien said that the club is open for plays of all skill levels, even beginners. Its function as a unique social gathering has, like its organization and accessibility, helped the D&D Club attract many new members.

“It started out as a club where a few nerds would meet after class on Fridays, but it quickly evolved into a group of people that I consider my closest friends,” Ryan Pelletier, a second-year psychology student and one of the founding members of the club, said. “The people I have met, the social bonds that I have created, and the experiences I’ve had in this club are something I will never forget.”

The club’s faculty advisor is Robert Bowie, a medical doctor, professor in UMaine’s Chemical and Biomedical Engineering Department and the father of President Cameron Bowie.

“I was recently asked to advise,” Bowie said. “They take pride in [running their club] well … It’s a positive activity for the students and as a professor and physician I am glad for this.”

Taylor Cray is a third-year political science and women’s, gender and sexuality studies student who also serves as UMaine’s vice president of student organizations for Student Government. In her role, she has interacted with the founding of the club and it’s members, who she says are a “pleasure to work with.”

“In regards to the Dungeons and Dragons Club, they are a passionate and motivated group of individuals, and it is obvious that they love what they’re doing,” Cray said. “As VPSO, my favorite part of the job is being able to work with club presidents and members to create and maintain organizations that benefit not only the individuals involved, but the UMaine community as a whole.”

After being asked about the club’s plans for the future, Johnson said that the goal is to keep expanding and recruiting new members

“[All] are welcome to join us in DPC 100, Fridays at 4:30 and let your inner nerd burst free and lose yourself screaming as you land a critical hit on the boss,” Johnson said.