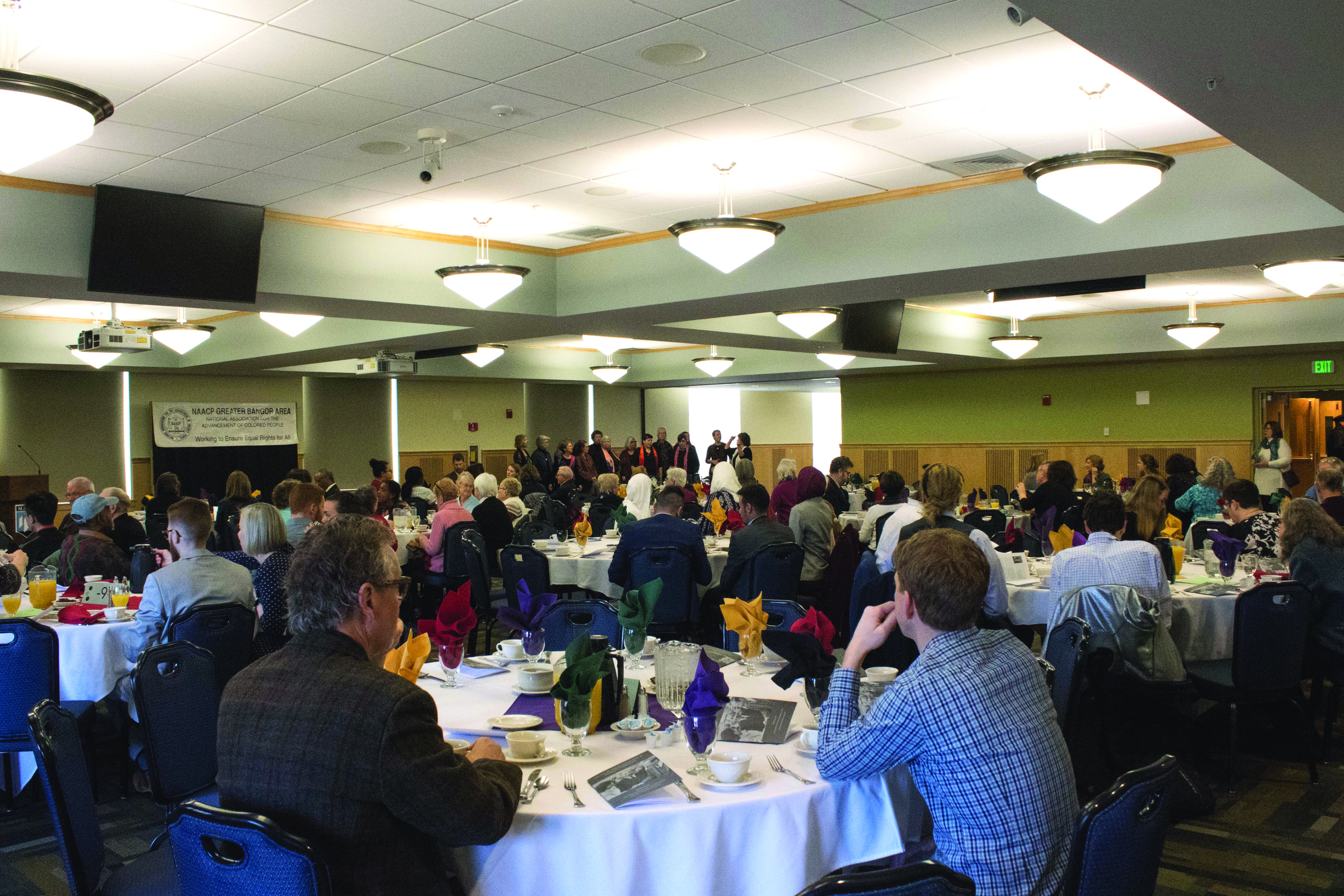 On Saturday, March 2, in the Wells Conference Center, the University of Maine held its 23rd annual Dr. Martin Luther King Jr. Breakfast Celebration. The event, which had been postponed from the national holiday on Jan. 21 due to inclement weather, was co-sponsored by the greater Bangor area branch of the National Association for the Advancement of Colored People (NAACP) and the University of Maine Division of Student Life.

The event, which took place nearly 54 years after the famous Selma to Montgomery marches began, featured a keynote address by Amy Sneirson, the executive director of Maine’s Human Rights Commission, and included the bestowal of UMaine’s Peace Writing Prize.

Michael Alpert, the current chair of the greater Bangor area branch of the NAACP and the director of the UMaine Press, began the breakfast by touching on both King’s legacy and the state of race relations in contemporary America. Alpert’s remarks were followed by those of Vice President for Student Life and Dean of Students Robert Dana and the University’s Provost Jeffrey Hecker, who each similarly celebrated the memory of the Reverend King.

“The Dr. Martin Luther King Breakfast Celebration is a joyous celebration of Dr. King’s legacy and values,” Alpert said. “It is an event that welcomes all students and community members.”

Since its beginning in 1996, the breakfast has become the Bangor NAACP’s largest yearly fundraiser well as a yearly tradition.

“We celebrate social justice, civil rights and nonviolence,” Alpert said. “Interested students should know that they will feel at home when they join us.”

“The annual Breakfast Celebration is always inspirational, providing an opportunity to consider the alignment of our mission with Dr. King’s values and to publicly rededicate ourselves to achieving his vision,” Dana said. “We have a responsibility to be a place where civility is prized, differing viewpoints respected and varied approaches to problem-solving discussed. In our thoughts and actions, we need to embrace the role of educated citizens in the ongoing global struggle for social justice and change.”

Following Provost Hecker’s remarks and the opening of a buffet breakfast, Amy Sneirson began to deliver her keynote speech. During her address, Sneirson spoke about experiences involving discrimination that she recalled from both her youth in Massachusetts and her career in the legal system, appealing to the attendees for their help in improving America’s future.

A lawyer by trade, Sneirson has practiced as an associate attorney in a Portland law firm as a civil rights attorney for the Maine Center on Deafness. She also practiced as an assistant in the state’s Litigation Department of the Office of the Maine Attorney General before being chosen as the Maine Human Rights Commission director in 2011.

The main message of Ms. Sneirson’s speech was to “meet hate with love,” which was fitting for the event, since the same message had been often communicated by King himself.

The Peace Writing Prize awarded during the celebration was named for Ms. Dorothy Clarke Wilson, a lifelong Mainer who is best known for her novel “the Prince of Egypt” and its 1957 film adaptation “The Ten Commandments.”

A biography in the breakfast’s program described Ms. Wilson as an “internationally known peacemaker” and someone who was “committed to writing on social issues and world peace.”

Gabrielle Sands, a second-year psychology student, was this year’s prize winner. Her essay titled “A Soliloquy Caught in a Dialogue” expressed personally held views connected to an address made by King in 1962.

“I believe that for social change to truly be effective, it must first start with the self,” Sands wrote. “The individual must no longer sit idly by as those around them are being oppressed, they must be active in their effort to make change.”

After the event’s conclusion, James Varner, a UMaine class of 1957 alumnus and longtime member of the Bangor NAACP, encouraged attending students to join the organization and expressed his gratitude to the student population on behalf of the greater Bangor chapter.

“Please make joining the NAACP and the Maine Human Rights Commission a priority,” Varner said. “By doing so, a person will help to preserve King’s legacy.”

Tickets for the breakfast were free to students and ranged from $15 to $20 for non-students and children.

Maine’s Gov. Janet Mills and the University’s President Joan Ferrini-Mundy, who had both expressed a desire to attend the breakfast, had to cancel their appearances because of scheduling conflicts.

On Thursday, March 7, UMaine will host Brian Purnell, a professor of Africana studies and history at Bowdoin College who will deliver a lecture in the Bodwell Lounge of the Collins Center for the Arts on King. Professor Purnell’s upcoming visit will be sponsored by the Howard B. Schonberger Peace and Social Justice Memorial Lecture Fund, the Department of History, the Office of Multicultural Student Life, the Black Student Union and the McGillicuddy Humanities Center.