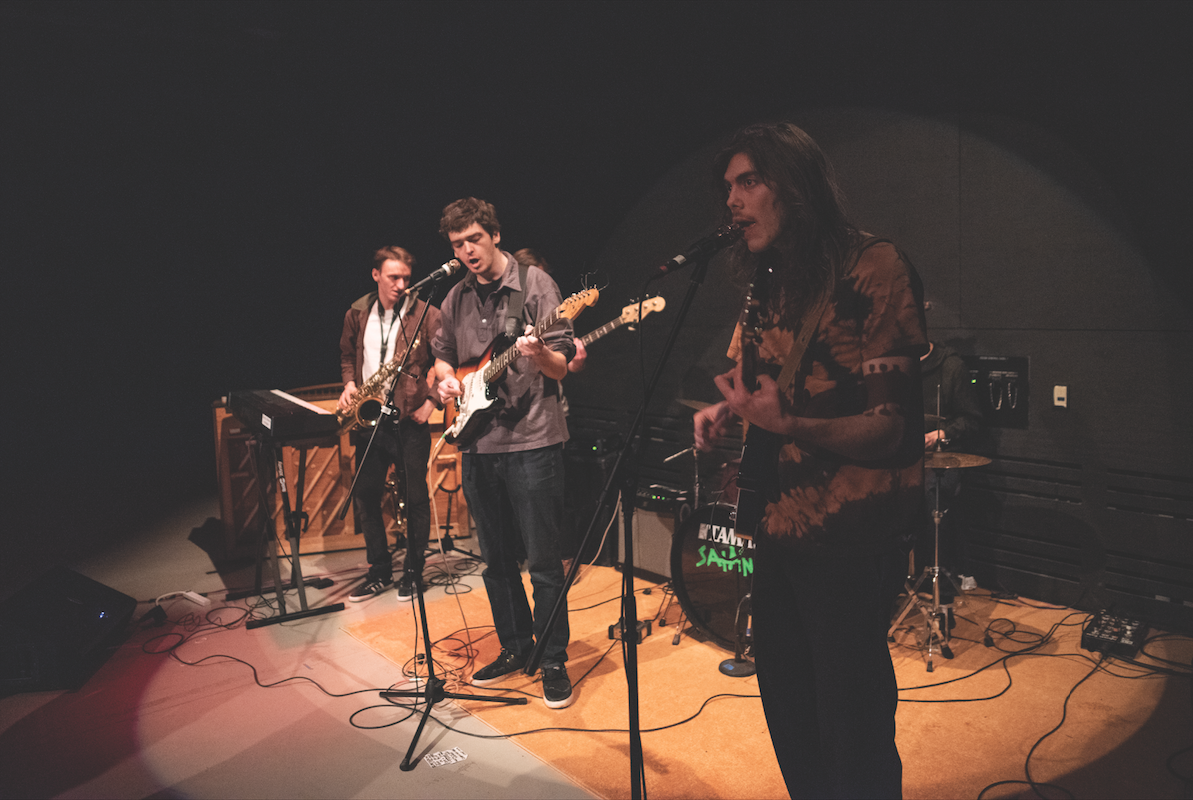 Yard Dog performs in the IMRC. Photo by MJ Gautrau.

On Thursday, March 7, students filed into the Innovative Media Research & Commercialization Center (IMRC) to watch Yard Dog, a band composed of five University of Maine graduates, perform. The band returned to UMaine as a part of a larger concert series hosted by WMEB, the UMaine student radio station.

The five members of the band have been playing together for four years. Since graduating college and writing their own music, their musical style has shifted from a self-titled “gypsy-surf punk” band to a band that spans the indie-rock genre as a whole. Vocalists Sean Kandall and Joe Ahem wrote all of the songs on the newly released EP, “Be a Good Boy,” which is available on Spotify. They are currently working on a full-length album that is expected to be released later this year, according to Colin Whitton, the band’s bass guitarist.

The concert featured songs off of their new EP, as well as covers of songs that they have been singing for years. Based on requests from the crowd, they switched from fast-paced songs to slower ballads with instrumental sections.

“Yard Dog have been friends of WMEB since they formed, and they haven’t been back up to Orono in a while,” Kat Hinman, a second-year new media student and promotions director at WMEB, said. “A lot of people who went to school with them have graduated or will be soon, so I wanted to make sure they continued to have a presence on campus and with the station.”

Along with the concert, WMEB also had students create pages for a “zine.” A zine is a book or magazine of collage art created by cutting and gluing images, text and drawings. The pages are then photocopied to produce the zine. The purpose of the station’s zine is to get people to engage with them. It will be produced and distributed by the radio station this school year.

“Art is a powerful tool when it comes to building communities,” Hinman said. “A lot of the people who come to shows up here already know each other, and that can be intimidating for someone new who wants to get involved. My hope was that by having a place where people could make art together, it could give people something to talk about with each other, or at least serve as a distraction from how awkward it can feel to be at a show by yourself.”

WMEB is planning on hosting at least one band a month going into next year. The concert series will feature local bands and acts from New England and the East Coast as a whole.

In addition to Yard Dog, WMEB is bringing in other artists to be a part of the larger concert series. In April, The Black Black and Birdgangs, from New York and Boston respectively, will be performing as a part of this series.

WMEB is trying to create a different music atmosphere in Orono. By bringing new artists to perform, they are hoping that more students will come to the concerts and create a more active music scene on campus.