Actress to audience: Mackenzie Peacock writes and produces her first play at UMaine 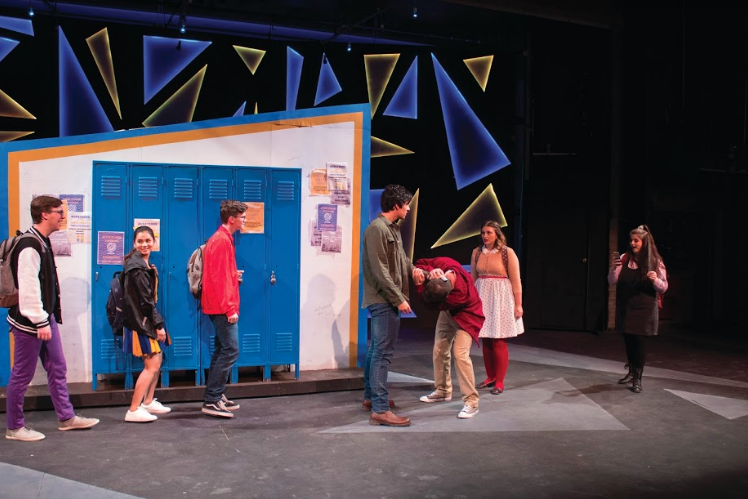 “I’m Still Alive” tells the story of Will as he goes through high school dealing with a bully. Photo by Antyna Gould.

Mackenzie Peacock began acting in high school, and has performed in countless plays at John Stark Regional High School, the University of Maine and various theater companies, including the Ten Bucks Theater Company in Bangor. But on Thursday, April 18, she sat in the audience of Hauck Auditorium and watched the premiere of her play “I’m Still Alive,” changing her perspective from actor to playwright for the first time.

In high school, Peacock auditioned for a one-act play after her older brother Zack encouraged her to audition. She loved theater and it was always something she had wanted to be involved in, but she needed someone to guide her in that direction. She auditioned for the one-act play, titled “Fortress,” which sparked her love for acting.

“I caught the theater bug and since then theater has always been something that I have to do. I can’t just be doing school work … I have to do theater or I would go insane,” Peacock said.

She continued to act throughout high school and participate in productions. Her passion for the arts led her to the University of Maine, where she is pursuing a double major in theater and communication.

Peacock prides herself on having a versatile skill set that helps her become a better performer. She has taken multiple acting classes at UMaine, singing lessons with Karen Pendleton, a voice instructor at UMaine, and began writing her own plays in her spare time.

“I consider myself, first and foremost, an actor. I also enjoy doing other things, like playwriting. I’ve always considered myself a writer ever since elementary school. I’ve always written poems and stories just in my spare time,” Peacock said.

“I’m Still Alive” was produced by the Maine Masque as a completely student-led play. Peacock pulled inspiration from different events in her life and her characters were inspired by people that she has met through high school and college. In high school, she was a part of the Anti-Defamation League and was a peer leader. Both of these groups focused on facilitating lessons with underclassmen in high school that were not easy to talk about, such as mental health, domestic violence and bullying. She began to ask herself what provokes people to bully each other in middle school and high school. Through research and her own experiences, she began to formulate her play.

“[The play] was just one of those things that I was writing just for fun in high school and it just sort of snowballed into this much bigger project,” Peacock said.

She began writing this play in her free time during high school but put it away for a couple of years to focus on her acting and school work. It wasn’t until she had to write a one-act play for a creative writing class that she pulled it back out.

After spending time refining and editing, Peacock realized that she wanted to have her play produced and performed. Along with director Noah Lovejoy, she pitched her play to the UMaine School of Performing Arts Board and the Maine Masque. “I’m Still Alive” was selected as the 2019 spring student-run production and cast 13 undergraduate students.

“Through entertainment and art, we can talk about issues like bullying and mental health through performance and spectacle. It is an easy way to get to people. I find that if you just read a statistic, like this number of people were bullied or the percent of people who commit suicide every year because of bullying, I find that this is not effective,” Peacock said. “I feel like numbers are important … but when you experience something, like a play, you actually understand the issues being portrayed.”

“I’m Still Alive” features a high school aged boy named Will and his struggles with Cam, the boy who bullies him. Peacock shows how different events and circumstances can play into a person’s behavior and feelings toward others. She marries her drama with supernatural elements such as when Will’s best friend Johnny comes back from the dead to help him get revenge.

As the play goes on, the audience learns more about the hardships that each character endures and how events in their lives shape their actions and responses to circumstances in their present life. By touching on the topic of bullying, suicide and domestic violence, Peacock hoped to begin a conversation among audience members about these difficult subjects.

After its final performance at UMaine, Peacock wants to refine the play further and hopefully have it produced in high schools and colleges to further continue the discussion of these difficult topics.

After graduating this spring, Peacock will be attending graduate school at UMaine and hopes to stay involved in the arts. The theater has been the largest part of her life over the last seven years and she does not plan to stop any time soon. She plans to stay involved with the School of Performing Arts at UMaine and will continue to write in her spare time.