Events hosted across campus in celebration of Earth Week 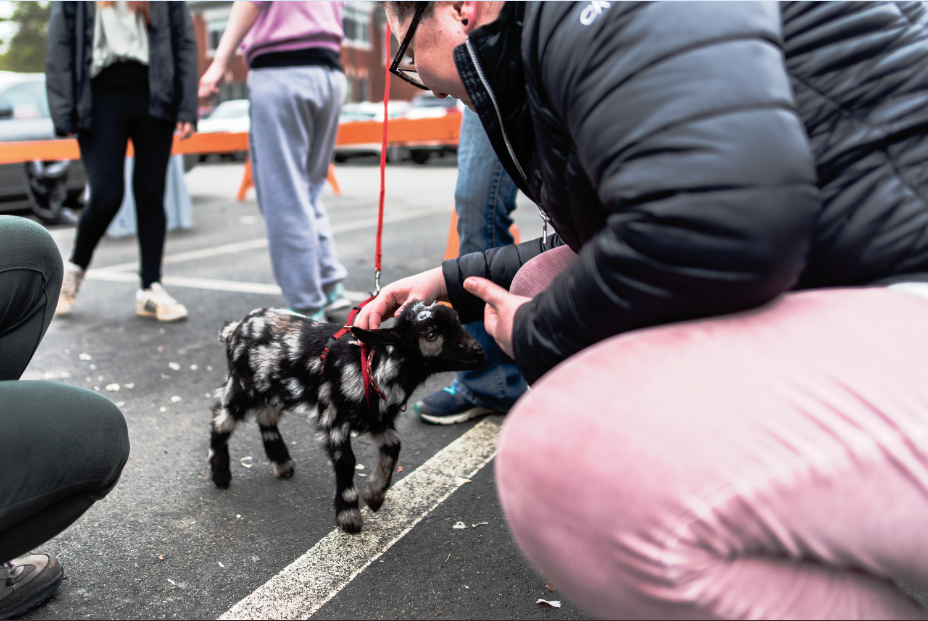 Starting with Earth Day on April 22, the University of Maine community hosted a week of talks, demonstrations and group activities to raise awareness of environmental issues and promote an Earth-friendly mindset.

Earth Week began with the Earth Day Spring Festival, held in the Lord Hall parking lot. Visitors met with local and student green clubs and organizations, participated in various activities and hung out with baby goats.

The Earth Week Presentation Series started with a talk titled “Community Sustainable Energy” by Sharon Klein, a professor in the School of Economics. Held at the Senator George J. Mitchell Center for Sustainability Solutions, the talk focused on community-driven energy initiatives.

Other talks in the series included “Climate Change FAQ File” with Ivan Fernandez from the School of Forest Resources, “Solar Thermal Energy to De-Carbon Industry” with Justin Lapp from the College of Engineering and “Whatever happened to Bipartisan Environmentalism” with Sharon Tisher, a professor of environmental law in the School of Economics.

Habib Dagher, executive director of the Advanced Structures and Composites Center, gave a talk on UMaine’s collaboration with Maine Aqua Ventus, a private company building a new form of floating wind turbine to power the state. Dagher covered updates on the project, which hopes to channel electricity from Maine’s potential 156-gigawatt wind resource, and sourced questions from the audience.

The Sustainability and Environmental Action Division helped organize the presentation series and supplied food and drinks for attendees.

Earth Week closed with the Healthy High 5K, 10K and 15K races. The Healthy High was created as an alternative activity for students to get away from the influence of marijuana use that is prevalent around April 20.

According to Joseph Skerritt, a third-year English student who ran in the Healthy High 15K, the event is a good opportunity to bring students, staff and the community together.

“It’s an atmosphere like no other. With the Healthy High, there is a sense of camaraderie amongst all the participants and volunteers. Even in the pouring rain people stood by the finish line after finishing to cheer on everyone as they finished the race,” Skerritt said. “Events like these brings the best out of the UMaine community. It seemed like hundreds of volunteers lined the streets to provide encouragement to everyone competing or to help make sure everything was running smoothly.”

“15k is a distance that is rarely offered at any running event and the fact that it was advertised as a ‘one year only’ attraction brought me to it,” Skerritt said. “The hardest part of the race was coming to terms with the weather. It was pouring rain for nearly the duration of the event. Being able to persevere through the rain made finishing so much more rewarding.”

The proceeds from the event went to the Student Wellness Resource Center and the Bodwell Center for Volunteerism.

Four years ago, the UMaine Board of Trustees voted unanimously to divest the endowment’s $502,000 holdings from all coal-mining companies. This followed the trend of many educational institutions who have done the same following pressure from their student bodies, as well as declining profitability of coal.

The University of Maine was ranked 49th in the Princeton Review’s report of the greenest colleges and universities in the U.S.