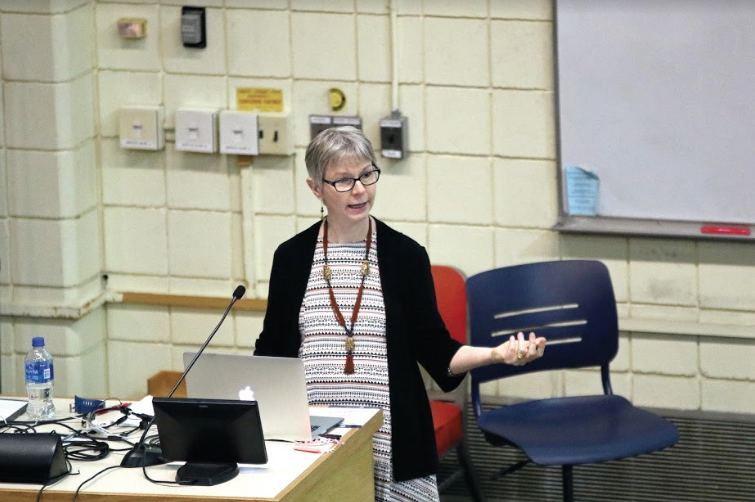 Lisa Klein, the author of the book “Ophelia,” visited the University of Maine on Friday, April 12 and Saturday, April 13 as the final speaker of the year in the Stephen E. King Chair Lecture Series. Klein was previously a professor at Ohio State University where she taught English, which often included Shakespeare. In her lecture titled “Hamlet’s Girlfriend Gets a Life,” Klein spoke about her book and discussed how we can rethink the familiar in our own lives.

Shakespeare’s play “Hamlet” is arguably one of his most famous pieces of work. The 17th-century tragedy features Hamlet, the Prince of Denmark, and his plan to exact revenge on his uncle. The story of Hamlet has been retold through countless plays, books and films, including a 1990 movie, titled “Hamlet,” starring Mel Gibson and Disney’s 1994 movie, “The Lion King.” Each adaptation features similar characters, plot points and themes as Shakespeare’s original play.

Caroline Bicks, the Stephen E. King Chair at UMaine, brought Klein to campus as a speaker in the King Chair Lecture Series. In the last year, the lecture series has featured other speakers like Leigh Gilmore and Adam Barr.

“My goal for the King Chair Lecture Series is to bring artists to campus who have taken their skills and passions as humanities practitioners into the wider world to address social issues and challenge assumptions,” Bicks said.

Klein is the author of “Ophelia,” a spinoff on the original plot of Hamlet. In the original play, Ophelia is a young noblewoman who is poised to marry Hamlet. However, she submerges into insanity, eventually drowning in a river. Klein imagined a world where Ophelia’s death in the play was not the end of her story. Instead, she uses it as a launching point for her book, believing that Ophelia faked her death. Through her reinterpretation, Klein asks that her audience rethinks the ordinary and presents voices of characters that are largely unheard.

“Through her fiction, Klein has made a career of asking readers to rethink the familiar and imagine alternative perspectives,” Bicks said. “In both her public lecture and in the fiction-writing workshop she offered to our students and staff, she brought awareness to the importance of crafting stories that allow previously unheard voices to come forward.”

Klein believed that modern renditions of the play have undercut Ophelia’s part and whittled down her role in the play. She described her book as a collection of the “what if’s” of Shakespeare’s original play and used those scenarios to reimagine the story.

“I doubt [Ophelia’s] madness, but I also doubt her death … I wanted to retell Ophelia’s story in a way that maintained the original integrity of Shakespeare’s play. There is nothing in the novel that contradicts the play … I wrote it between the lines, so to speak,” Klein said.

Klein’s book is also being made into a movie, starring Daisy Ridley as Ophelia, that is set to be released in June 2019. Klein said that the movie takes several deviations from her book, but it gives a voice to contemporary movements, such as the #MeToo movement, which further perpetuates Klein’s message of giving a voice to those who previously have not had one.

The King Lecture Series will resume in the fall of 2019 where it will continue to bring in people who have used their skills and passion for the humanities to address broader social issues within our society.