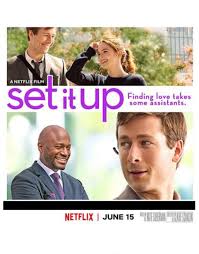 Netflix is a haven for college students. It is where we go for stress relief, to waste time, to forget about our school problems and also for entertainment. One recently released Netflix original that caught my attention this week is the movie “Set It Up.” Starring Zoey Deutch, Glen Powell and Pete Davidson, this romantic comedy sheds new light on workplace relationships and the roles of men and women in powerful positions in America.

Directed by Claire Scanlon, this one hour and 45 minute film includes many emotional twists and turns. The film stands out because of how easily you can connect with and relate to many of the main characters, which is possible because of how much description and background information you are given on each of them.

Rated TV-14, this movie centers around love interests Harper (Zoey Deutch) and Charlie (Glen Powell) who are interns in the same office building, working for highly esteemed and wealthy business employers. Hoping to get promoted and kick start their careers, Charlie and Harper struggle under the weight of the pressures put on them by their bosses. They meet while fighting over food after a stressful late night at the office. Harper then devises a plan to get their bosses to meet and fall in love in hopes that a newly budding relationship will distract them from treating Harper and Charlie so poorly.

The movie is modern, funny, emotional and all too relatable for young adults trying to secure a career path after college. Although many original shows and movies on Netflix are often cliche or overdone, this movie is unique in plot and stands out among the typical romantic comedy choices available on the streaming site.

“Set it Up” is available under the romance category on the Netflix website as it develops a romantic relationship not only between bosses Rick and Kirsten, played by Taye Diggs and Lucy Liu, but also between the two main characters.

This movie reminds me of a few others films currently on Netflix that are directed towards young adult audiences. “One Day” and “Silver Linings Playbook,” are 2011 and 2012 movies that have recently appeared on the Netflix app that relate to “Set It Up” in terms of character development and the personalities of the two main romantic partners. These romantic comedies intertwine two people’s lives while also working to develop an intricate plot structure and details about each character’s life and personality that help the audience get to know them.

Movies are a great way to relax after a busy school week and are rewarding both to watch and to experience. “Set it Up” is full of corny young adult jokes, innuendos and just enough sarcasm to make it worth watching and enjoyable. You know a movie is good when you are constantly laughing out loud to yourself, and that is why “Set It Up” is a Netflix original worth viewing.