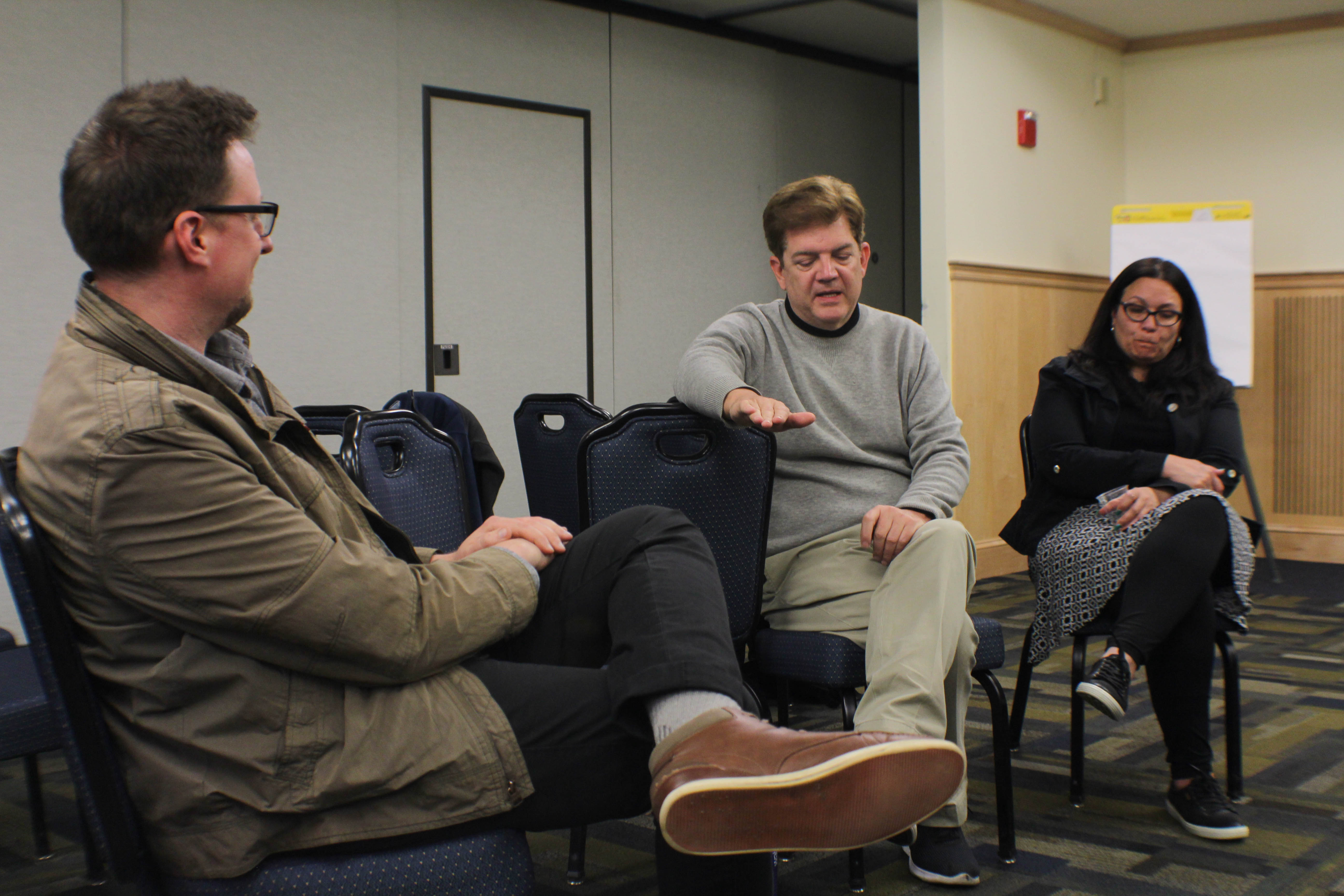 The University of Maine Communications and Journalism Department hosted Pulitzer Prize-winning editorial cartoonist Jack Ohman as the 2019 Alan Miller Visiting Journalist. He gave a free, public talk and toured a series of journalism classes to speak on his experience as a cartoonist in the quickly changing world of journalism

Ohman’s public talk, titled “Drawing the Line: Cartooning in a Self-Parodying Era,” covered the basics of his life and the series of events that led him to his current stature as the second most popular editorial cartoonist in the United States.

Born in 1961 to John and Jackie (the irony is not lost on Jack Ohman), he grew up surrounded by politics. The Watergate scandal and Richard Nixon’s resignation arrived just as Ohman was becoming conscious of national affairs. He said that no one had cable back then, so Watergate coverage was the only thing on TV.

He followed that track through high school, becoming a member of student government and challenging the president for her seat before getting outmaneuvered. The same classmate who beat him in the presidential race nominated Ohman as the student representative to the school board.

Ohman said that, in hindsight, this move was a catalyst for the realization that he was not meant to be a politician.

Despite this early omen, Ohman went on to work in politics for most of his young 20s. He was a driver for a United States congressman from Minnesota and an aide to a state senator, which only lasted about six weeks.

“I realized that I had a very independent personality. I wasn’t good as somebody’s aide,” Ohman said. “And so I figured I’m either going to run for something or I’m going to do my own thing.”

Ohman said that the first indication of his future came when the mother of one of his friends suggested that he apply to draw the cartoon for the Minnesota Daily, the student newspaper of the University of Minnesota Twin Cities. He said he was hired over 40 art students at 17 years old before he matriculated at the university.

His work quickly gained popularity, and within a year it was syndicated to over 100 newspapers. He was the youngest ever nationally syndicated editorial cartoonist. His work is now distributed to over 300 newspapers, including The New York Times, The Washington Post and Chicago Tribune.

The talk was lightly attended. Besides the two reporters and members of the communications and journalism department, there was only one attendee. The small crowd was less than an issue for Ohman, who took advantage of the intimacy to lead a discussion of the absurdity of current politics. It was a politically-homogenous group and much of the talk centered around the impending Justice Department report from Robert Mueller.

Ohman said that he falls left-of-center politically and admits his bias in the work he does. He does hold himself to a moral standard, however, and maintains the truth in all he draws.

“What I do is interpret basic facts using irony or humor. That’s opinion and I’m allowed to do that,” said Ohman.

Most recently, Ohman’s work has followed the fiasco between California congressman Devin Nunes and the Sacramento Bee, Ohman’s newspaper. The Bee published a thoroughly reported piece detailing a debaucherous party hosted by a vineyard partially owned by Nunes. It involved a yacht, cocaine and sex workers. Nunes sued the newspaper for $150 million for defamation, despite the story being true.