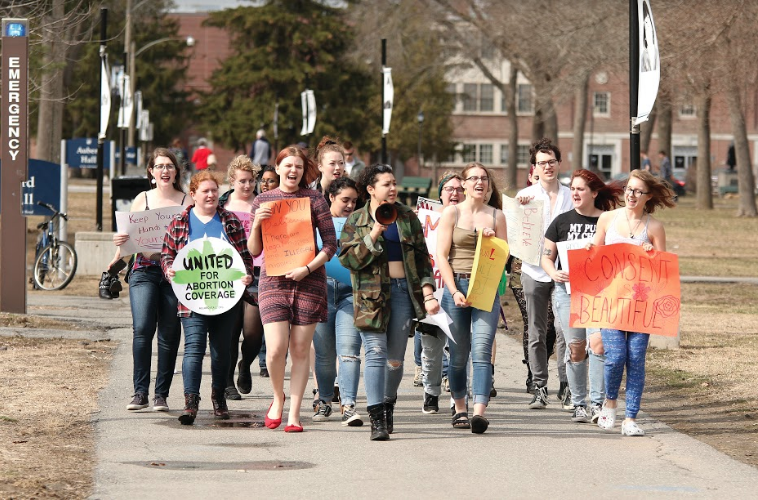 The Annual SlutWalk empowers feminists during a strut around the mall. Photo by Matt Lavoie.

On April 19, outside of Raymond H. Fogler Library at the University of Maine, students gathered together to participate in the annual SlutWalk. Sponsored and hosted by the UMaine Feminist Collective, SlutWalk is part of a series of events known as “Beautiful Week.”

“Beautiful Week and SlutWalk focus on celebrating your body and yourself, and is increasingly essential in the campus’ current conversation around adequate mental health resources,” Miranda Snyder, a second-year secondary education and English student, said. “They are contingent on being intersectional and celebrating everyone’s bodies, experiences, and identities, which is a celebration that ought not to happen only once a year, but be normalized into an everyday cultural practice.”

The other events held this week have included a “Self-Love Spectacular” on Monday, April 15, where students worked on self-care activities and crafts, and made friendship bracelets. On Wednesday, April 17, in the FFA room of the Memorial Union, the Feminist Collective held their first ever discussion on ableism. The week is meant to celebrate the beauty of all human beings and the celebration of our diversity and equality.

“The Feminist Collective is contingent on intersectional activism. That means that we take all aspects of identity, whether it be race, gender, sexuality, socioeconomic status, in our activism,” Snyder said. “We are working diligently to become more intersectional and aware advocates, and using whatever privilege we possess to boost other voices. Specifically, we have focused on and will continue to focus on current events, ecofeminism, reproductive justice, sex positivity, race, body positivity, ableism and more.”

The SlutWalk is an effort to make women feel empowered and comfortable in their own skin. Students met in front of the library wearing what made them feel confident. During the march, participants held up signs with phrases that criticize slut-shaming and other derogatory terms towards women. Many women were dressed in revealing clothing in order to take a stand against the belief that sexual assault occurs when attackers are provoked by the clothing women wear. The students marched around the mall while chanting and shouting words of empowerment.

“Being a part of the Feminist Collective has made me into the advocate, leader and friend I am today. I am extremely grateful for the opportunities I have been given via this group to create events and activist activities that are important to me, and am very proud of how they have turned out,” Snyder said. “However, my great experience wouldn’t have been possible without the incredible friendships and partnerships that this activist community has given me. I have learned boatloads about my internalizations about feminism, feminism as a whole, and how it can be wielded to help those who need it most.”

“I always love to watch the SlutWalk when I’m walking to class every year,” Kimberly Stoddard, third-year parks, recreation and tourism student, said. “It makes me so happy to see women fighting for their rights and for what they believe in, we need more of that on this campus and in this world.”

SlutWalk is not only an event on UMaine’s campus, but is also a world-wide movement fighting to end rape culture and slut shaming of sexual assault victims. On April 3, 2011, the first-ever SlutWalk was held in Toronto, Ontario, with thousands of people gathering in Queen’s Park. This is when SlutWalk rallies started taking place after a police officer made a public comment about women needing to stop dressing in a revealing way in order to decrease sexual assault victim numbers. SlutWalks have taken place throughout the United States, Australia, Europe, Latin American and Asia, being termed other names like “La Marcha de las Putas” and the “Swiss SlutWalk.”

“It is vital to have events like SlutWalk on a college campus, specifically ours, since college campuses are oftentimes breeding grounds for rape culture,” Snyder said. “SlutWalk’s message that what you are wearing does not warrant assault is increasingly necessary with Betsy Devos’ revisions of Title IX policies.”

Photo via imdb.com
Don’t go to a festival…

The UMaine Honors College Student Advisory Board hosts a bar crawl through downtown Orono on Friday, Dec. 6th to benefit the Maine Day Meal Packout event being held in May. Photo by Olivia Shipsey.
Bar Crawl raises money for…

The crew of Ocean Star on deck, taken from up in the sail rigging. Photo by Jillian Dow.
Life on a floating home:…