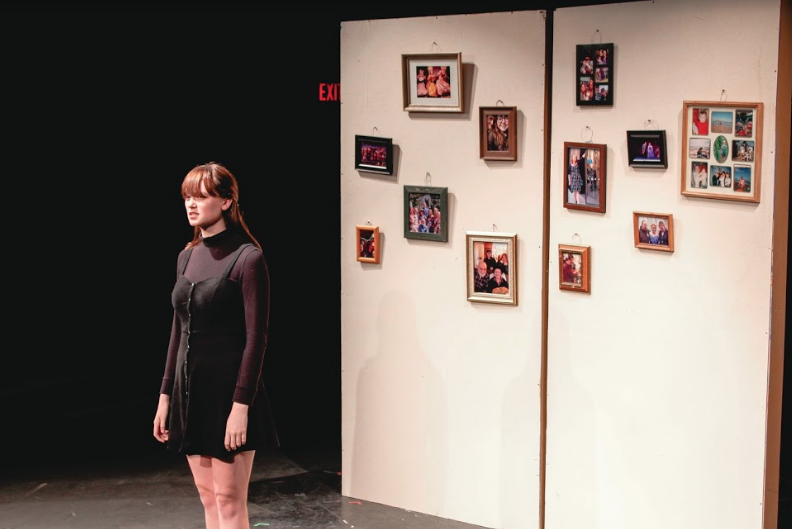 On Monday, April 22 at 7 p.m., fifth-year theater student Callaghan Sue Carter took to the stage to announce the start of her capstone performance, “22- A Showcase on Mental Illness.” Sharing a piece of herself with each person in the audience, Carter used her monologues to open up about mental illness and the struggles of being a college student.

Seven students, along with Carter herself, performed the monologues she had written about various subjects. Each one ranged in length, style, emotion and topic. Hosted in the Al Cyrus Pavilion Theater, the intimate space allowed for a quiet and pensive environment for the show to take place.

“It was really cool to see my life played out on stage through the lens of other people. I got to see them perform and act out what I had written,” Carter said. “I wrote and directed the show myself, so seeing how the actors perceived and performed what I wrote really inspired me.”

Carter’s monologues centered around stories from her life and many hard to address topics such as mental illness, sexual assault, death, anxiety and depression. These monologues were written as part of Carter’s senior capstone project.

“I started writing these monologues in September and have been working on them since then, making sure to shed light on the things that are important to me,” Carter said. “We then started to rehearse for the show in early March and everything came together to get the show where it is today.”

Dressed in black, the actors in the show each walked up to the stage and performed their individual monologues. The actors included Lia MacLellan, Katie Luck, Sophia Crockette, Nellie Ickes-Coon, Keely Gonyea, Callaghan Carter and Owen Sinclair. Carter performed the seventh and penultimate monologue in her show, titled “That Kind of Love.” Her piece shared stories about being in love and working to cope with a long distance relationship.

“Sitting through this performance was very emotional. Everyone in the audience was completely silent as these actors poured their hearts out through Callie’s words.” first-year bio-premed and theater student Autumn Rogers said. “Although the event was short, it made a long-lasting impact on me and everyone who I went to see it with.”

The first monologue of the night, titled “Tuna Fish Sandwiches” talked about a story of divorce and the toll that it can have on a child’s life, and the trust issues that go along with it. After this monologue was performed, Katie Luck took the stage and recited her part of the show called “Some Days Are Better Than Others,” a short story about depression and hopelessness. Other monologue titles performed include “I’m Drowning,” recited by Nellie-Ickes-Coon, “Mine” by Keely Gonyea and “Dear One” by Owen Sinclair.

“Originally I wanted to direct a full-length play, but we didn’t have the time or money to produce another show in program. Being a creative writing minor and theater major, I wanted to find something that could combine the two, so I decided on this medium,” Carter said. “I have also always been a mental illness advocate, so sharing stories from my own life and about mental illness was really inspiring for me.”

The site of the event, the Al Cyrus Pavillion Theater, is often used to showcase small student and university performances, in order to create a specific mood and setting that goes well with each project. The stage was set up with a white backdrop, covered in framed colorful photos. One small chair was used as a prop by the some of the actors as they read their monologues, and the simplistic setting allowed the audience to focus their attention on the actors and their confessions. Callaghan designed the set herself and chose the theater space. The show was performed one night only.

“A word of advice – if you’re gonna write your capstone, don’t cram it,” Carter said. “I crammed mine in during my last year here, but if you’re really passionate about the topic you choose, it won’t feel like a ton of work, and you’ll learn from your experience.”

Friends and family of Carter stayed after the event to talk with her about the show and to celebrate her work. Carter used her capstone to advocate for and expose the struggles of mental illness and hopes to continue doing this with other projects.