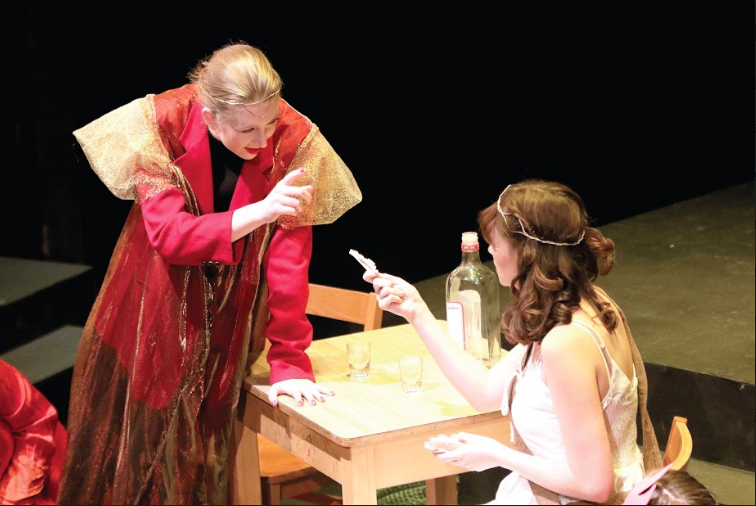 A modern tale of Inanna, ancient Sumerian goddess Inanna, known as Queen of Heaven, and Earth unfolds in the Al Cyrus Pavillon. Photo by Matt Lavoie.

This weekend, the Al Cyrus Pavilion Theater hosted several showings of the play “Inanna: A Modern Interpretation,” written and directed by fourth-year communications and theater student Erin Butts. The play is a reinterpretation of the ancient Sumerian tale of Inanna, a goddess who faces several formidable obstacles, makes grave mistakes and ultimately is rewarded for learning from these challenges.

Touching upon heavy topics like death, love, morality and nature the cast excellently made the struggles and ideas feel intimate and real. Intimacy was also produced by the choice of venue, the Cyrus Pavilion, which brought the audience so close to the actors that at points it felt as if the characters were talking directly with the audience.

Butts sees the original tale of Inanna to be rich with the discussion of contemporary issues, like feminist concerns and found the play to chart the ways that feminism has evolved.

“The move into modern feminism is shifting the way we speak about women, specifically turning away from genital specific definitions of womanhood. The focus is changing towards a distinction between gender and sex, with a strong emphasis on intersectionality. That is what I hope this production depicts,” Butts said.

The original play was written in the late 1970s when feminism was deeply rooted in biological indicators of sex. Through her rewriting and directing of Inanna, she hoped to depict the more contemporary discussion of intersectionality in gender and sex.

One can see many of these feminist discussions taking place with the character Inanna, played by Katie Luck, a first-year English and theater student. Inanna is a goddess who, throughout the play, undergoes many timeless mythic challenges like battles with gods and a descent into the underworld. Her intentions are often good, often acting with her people in mind, but occasionally makes mistakes like making Gilgamesh fight and kill one of Ereshkigal’s minions which causes hatred toward Inanna and drives Inanna’s journey to Ereshkigal’s territory, the underworld.

Inanna’s story is ultimately a positive one that allows for her reconciliation with Ereshkigal, her husband Dumuzi, and peace being restored to both the human and divine world. This reconciliation for Inanna is part of the reason that Butts finds the story so relevant today.

Butts aptly summarized Inanna’s tale saying, “When I set out to write this play, I didn’t know where it was headed. I just knew that I wished more people could hear her story. Theater has the ability to make even the most forgotten tales relevant again. Inanna is a strong character with many flaws, but relentlessly persistent. She displays distinctly human characteristics that we can learn from despite her status as a god. We cannot let her power be forgotten.”

The UMaine School of Performing Arts has several upcoming shows including the Opera Scenes Performance and Maine Masque Presents “I’m Still Alive.” More info can be found on their website, https://umaine.edu/spa/.