The Clothesline Project Comes to UMaine 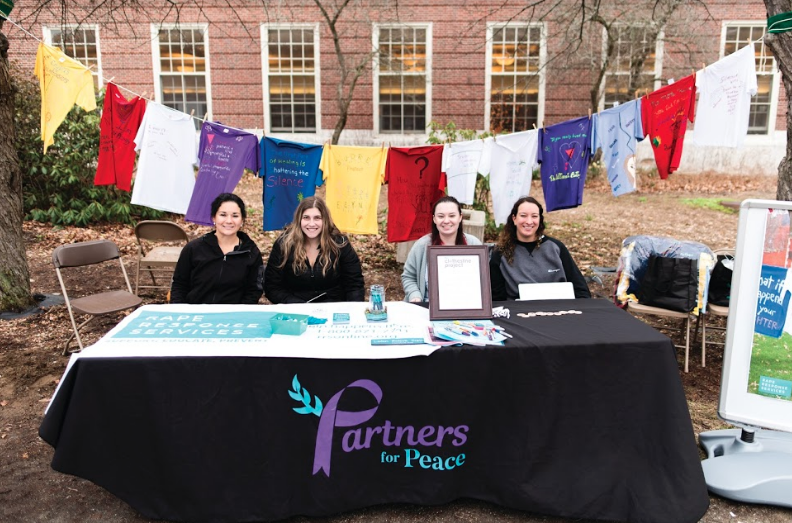 Partners for Peace presents The Clothesline Project to show support for victims of sexual violence. Photo by MJ Gautrau.

On Monday, April 22, Rape Response Services and Partners for Peace produced the Clothesline Project installation on the University Mall. The project is made up of t-shirts that are created by survivors of sexual assault or created in honor of someone who has experienced violence. It shows a visual representation of the violence that women face everywhere, even in Maine. The project is a part of the Sexual Assault Awareness Month programming at the University of Maine.

The Clothesline Project was created in Hyannis, Massachusetts. In 1990 when members of Cape Cod’s Women’s Defense Agenda learned that during the Vietnam war, 58,000 men were killed in combat but back home, 51,000 women “were killed by men who claimed to have loved them,” according to the Clothesline Project website. The project began with 31 shirts and has continued to grow.

The project provides visual evidence that forms of sexual violence are present in our community. It also gives a voice to those who have not always had one. It aims to stir the public to action. They believe that the public must be informed about violence in order to act to prevent it. Rape Response Services and Partners for Peace had tables at the event to help educate and talk to students.

“This event is important to host at UMaine because it creates a visible representation of the violence that is prevalent in our society. Raising awareness as well as offering support and services to victims and survivors is essential, this event allows us another opportunity to make sure that survivors/victims are seen and validated,” Amy Coleman, a graduate assistant in the women, gender and sexuality studies program and the Rising Tide Center, said.

The installation on the Mall is made of only shirts from UMaine community members and features shirts from installation in the past year as well. Over a dozen shirts were added this year and the project has continued to grow. The goal is to spread awareness and provide support and resources for those affected by violence.

“The Clothesline can offer an opportunity for victims [and] survivors to write down their story and have the opportunity to turn their back and walk away from it, many people find this healing and having the opportunity to share stories with others and find new support systems is essential to creating systems that continue to advocate for victims and survivors,” Coleman said.

The shirts were decorated in unique and colorful ways. Some featured names of survivors, while others had messages of hope or quotes. But all stood as a message for the ongoing issue of sexual assault and violence in our country.

The goal of the project is to educate the community that violence is a problem everywhere and that there is help for survivors as well as paths to healing.

“The University has been very welcoming and open to the event and has provided support to not only our department in facilitating these difficult dialogues but also in creating spaces that allow our community members access to counseling services specifically from Rape Response Services and Partners for Peace. We appreciate the continued collaboration,” Coleman said.

The installation ran from Monday through Thursday. On Wednesday, the project ran in conjunction with Denim Day. Community members were encouraged to wear denim to stand in solidarity with survivors and educate themselves about all forms of sexual violence.

An organization called Peace Over Violence has been running Denim Day for the past 20 years. It was created after the Italian Supreme Court overturned a rape conviction because the justices felt that since the victim was wearing tight jeans, she must have helped the man who assaulted her remove them, therefore implying consent. The following day, female Italian Parliament members wore jeans in solidarity with the survivor.

Denim Day now serves as a reminder that there is no excuse for violence. Denim Day activities included free buttons and educational material provided by Rape Response Services and Partners for Peace.

“Against My Will UMaine” is another exhibit on the Mall during the month of April, as a part of UMaine’s sexual assault awareness month programming. Artist Tracy Molloy painted UMaine students and faculty members who are survivors of sexual assault. Her work was displayed on the Mall until April 27.

Four Eyes is the mellow emo folk artist of your dreams
Student capstone addresses mental illness, loss and the personal through monologues