Tunnel of Oppression challenges perceptions of groups on campus 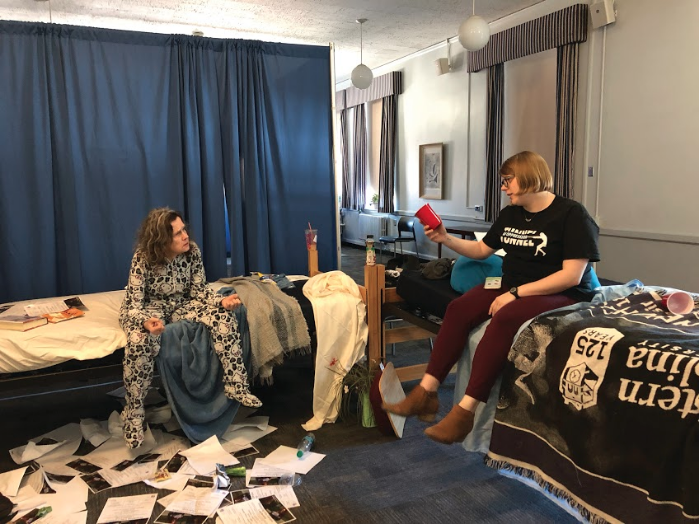 The Tunnel Of Oppression aims to let UMaine student’s walk in the shoes of oppressed populations. Photo by MJ Gautrau.

On Wednesday, March 27, Campus Activities and Student Engagement (CASE) hosted their second annual Tunnel of Oppression exhibit in the Memorial Union. The exhibit is a part of the University of Maine’s Women’s History Month programming.

The tunnel is an immersive experience designed to make attendees uncomfortable. It forces people to step into the lives of oppressed groups that are present on the UMaine campus and worldwide. Many campus organizations helped create the tunnel, including the Multicultural Center, the UMaine Women, Gender, and Sexuality Studies Program and UMaine LGBTQ services.

Five different rooms made up the tunnel, depicting experiences of oppressed groups on campus. They included skits put on by student volunteers, statistics and short videos relating to ableism, mental health, religion, transgender and nonbinary identities and Title IX. The final room, the “Room of Hope,” was designed to encourage conversation among viewers about various topics.

“[The tunnel] covers issues that are not necessarily being talked about on campus … it highlights what they go through on top of academics and social and family life,” Benjamin Evans, the coordinator of CASE, said.

CASE facilitators and student volunteers guided groups through the tunnel and explained the significance of each room. The exhibit began in a room dedicated to religion which included Christianity, Islam and Judaism. The walls were covered in news articles, personal stories and facts about religious oppression and misconceptions around the world. This room was created by the Wilson Center, a multi-faith, spiritual exploration group.

The tour then went on to cover topics pertaining to mental health, which was organized by the Counseling Center. Two student volunteers acted out a skit depicting one roommate dealing with a mental health issue and another roommate who did not understand what she was going through. Evans noted that this room showed what symptoms of mental illness can look like.

Student Accessibility Services (SAS) showed videos of two students on campus who have disabilities and provided statistics relating to disabilities at UMaine. There are currently 920 students with disabilities enrolled in the university and working with SAS. According to Sara Henry, director of SAS, this room highlighted 11 different types of disabilities that students at UMaine are living with.

Title IX services focuses on gender discrimination, including sexual harassment and assault, violence and stalking, and educates students about their rights under Title IX and the Violence Against Women Act. Volunteers acted out a scene at a party that ended in sexual assault.

The final room, the “Room of Hope,” brought participants together to discuss what they learned and what they were surprised by, and allowed individuals to share their personal experiences. Psychologists participating in the event encouraged students to speak and listen with intention, and tend to the wellbeing of the group in the room. Chuck McKay, a counselor at the Counseling Center on campus, discussed the idea of challenge by choice, which means individuals have the power to challenge pre-existing social norms and begin having difficult conversations encouraged by the Tunnel of Oppression.

Campus partners have been working on the exhibit since early September. They met once a month to develop their topics and find volunteers. In an attempt to show a variety of experiences, Evans said they made a conscious effort to feature different topics than they did the year before to demonstrate the range of oppression that individuals can face.