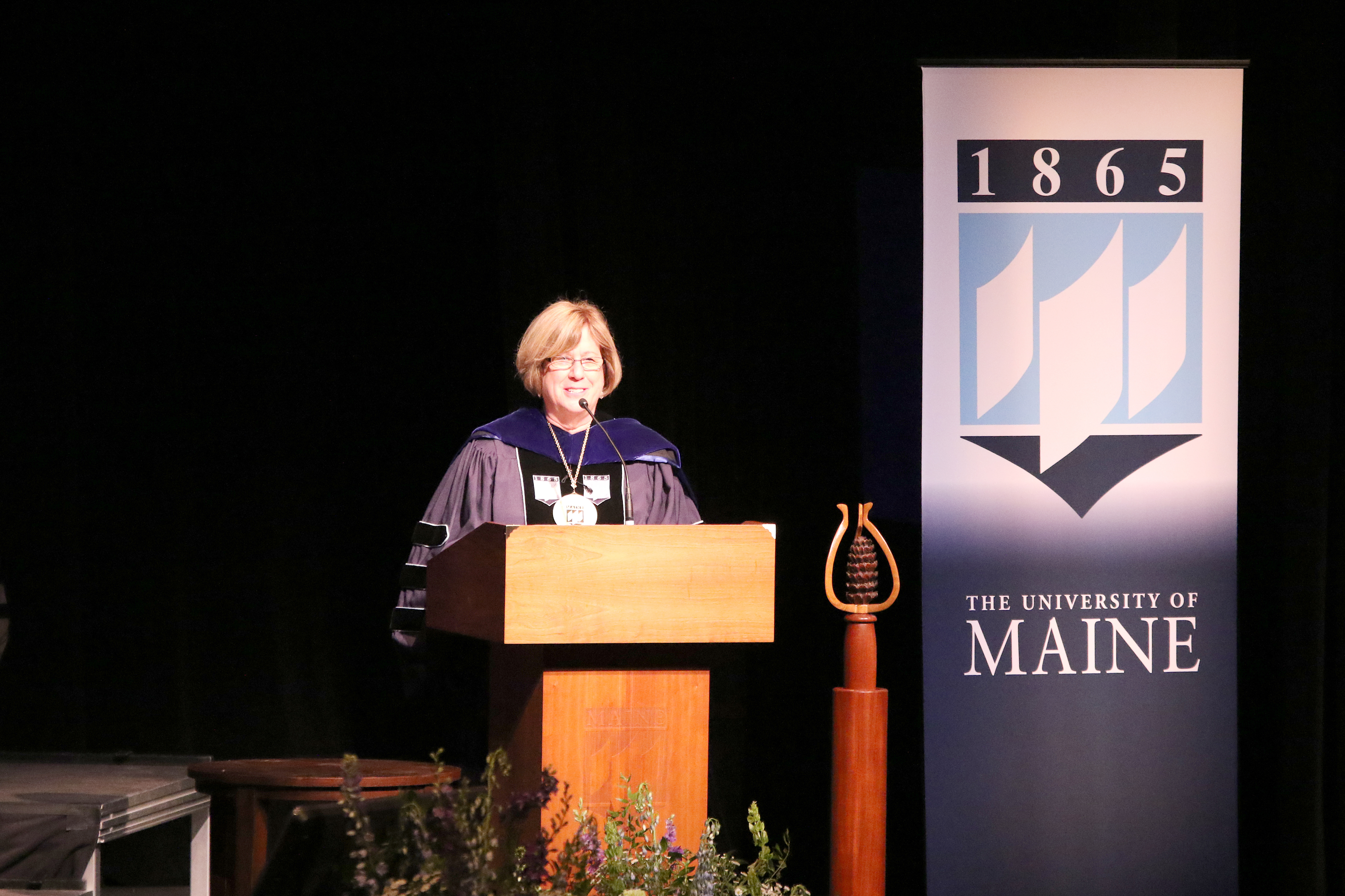 Dr. Joan Ferrini-Mundy was inaugurated as the University of Maine’s 21st president on March 29. Ferrini-Mundy began her duties as president at UMaine and the regional campus of UMaine Machias on July 1, 2018.

The inauguration, held in the Collins Center for the Arts (CCA), was emceed by Daniel Williams, the chair of the Inauguration Planning Committee and CCA director, and included performances by the University Singers, the Screamin’ Black Bears Pep Band and a brass sextet.

Williams also relayed an endorsement from Congresswoman Chellie Pingree, who could not attend.

Before her selection as Susan Hunter’s successor, who led the university from 2014 until 2018, Ferrini-Mundy was the chief operating officer and head of the Directorate for Education and Human Resources at NSF. NSF is a $7.8 billion organization that oversees science research funding.

Ferrini-Mundy holds a doctorate in mathematics education from the University of New Hampshire.

To begin her address, Mills rattled through some self-congratulatory wisecracks about how excited she was to be elected governor.

“I loved being attorney general, but I’ll tell you, I’d go to those conferences and they’d all call me ‘General Mills,’ but no longer,” Mills said.

Mills spoke highly of UMaine’s reputation for accessibility and production of high-achieving citizens.

“While there’s very little ivy on these walls,” she said, “neither are there ivory towers, or moss covered windows, or gated paths to learning here, or ceilings made of glass.”

Much of Ferrini-Mundy’s career has been based on the advancement of science, technology, engineering and math education, and her selection as UMaine’s president came during a period of high demand for STEM workers.

Four out of the five highest-demand occupations requiring postsecondary degrees are in STEM fields, according to the state of Maine’s Center for Workforce Research and Information. The number of Maine jobs in STEM is expected to rise to 115,900 by 2024, but Maine’s population is beginning to contract and will continue to shrink.

Mills made sure to emphasize the anxieties of Maine’s stagnant economy during the address.

“Will Maine rise to the challenges of today and ensure that our students are the leaders of tomorrow? I hope so, and I have every expectation that with her leadership we will do so,” Mills said. “I’m grateful that the University of Maine is playing a critical role in addressing Maine’s workforce shortage … and will spur the economic growth that we need.”

In her acceptance as UMaine’s next president, Ferrini-Mundy said, “Helping people learn mathematics is my first love, a passion that brings understanding and respect for the faculty who conduct the scholarship, teaching and research so fundamental to the university mission. Based on early conversations and first impressions, I have every confidence that the faculty, academic leaders and I share an appreciation for the institution and traditions of higher education.”