Editorial: The importance of student participation in college activism

Home /Opinion/Editorials/Editorial: The importance of student participation in college activism 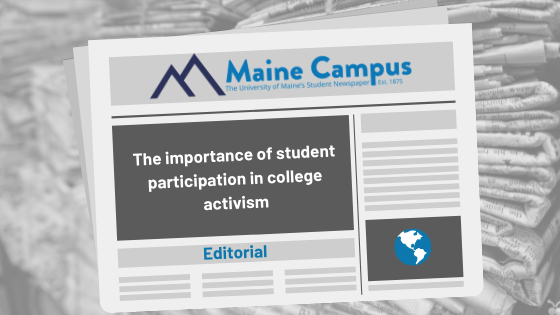 “If not you, who? If not now, when?” This quote, penned by 16-year-old climate activist Greta Thunberg, serves as a homing call for every person on this planet who is and will be affected by climate change. On Friday, Sept. 20, and again on Friday, Sept. 27, people around the world will walk out of businesses, jobs, homes and their classrooms to participate in a global climate strike.

The strike’s goal is to disrupt “business as usual” in an attempt to highlight how crucial climate change action is for the future of our world. Already, organizations, activists, and everyday people have signed up in over 150 countries to participate. As the first strike grows near, the participation of students, across the nation, around the globe, and at the University of Maine is imperative for success.

UMaine is a school that places climate change and sustainability on its priority list. Organizations and administration offices work year-round to create sustainable practices for UMaine and it’s students. The Office of Sustainability has implemented sustainable dining and housing procedures such as composting, trayless dining and various water, heat and electricity conservation. Additionally, UMaine dining has already passed its 2020 goal of purchasing 20% of food from local partners. Dining halls, dorm rooms, walkways and classrooms are all equipped with zero-sort recycling, making it easy for students to help reduce waste.

Earth day celebrations are another big deal at UMaine come springtime. The yearly week-long celebration brings educational workshops, presentations, trivia, club outings and raffles to students. This year marks the 50th Earth Day and UMaine is sure to celebrate.

All these efforts from the university encourage student activism. When the semester gets rolling, homework starts piling up, and students’ plates fill with responsibilities, it can be difficult to find time to stand up for a cause. However, throughout history, students have been an influential force paving the way for societal and political change.

On Feb. 1, 1960, four African American students Ezell Blair Jr, Franklin McCain, Joseph McNeil and David Richmon, from North Carolina Agricultural and Technical State University sat down at a Woolworth’s lunch counter in Greensboro, North Carolina and refused to leave despite segregation practices that were commonplace at the time. Just three days later, the four students were joined by 3,000 others in more than 50 cities, sitting at lunch counters and refusing to move to protest segregation.

According to a New York Times article on historical student activism movements, the “actions of the so-called Greensboro Four led directly to the creation of the Student Nonviolent coordinating committee, which the civil rights organizer Ella Baker urged students to form in April [of]1960 to coordinate the continuing sit-ins.” These efforts from students across the country sparked the momentum that “eventually contributed to the passage of the Civil Rights Act of 1965, which outlawed segregation in public spaces,” according to the New York Times article.

Student activism created history again in 1989, this time in Czechoslovakia. Students in Czechoslovakia took to the streets eight days after the fall of the Berlin wall, to protest the Communist Party of Czechoslovakia. Over 500,000 protesters joined the students in Prague, and despite being attacked by riot officers remained peaceful until 11 days later when the Communist Party of Czechoslovakia relinquished power. The same New York Times article states that the “extraordinary revolution” was one of the “most rapid and complete successes for a student-led movement in modern history.”

Modern efforts by students still exist today. The Black Lives Matter movement was started in 2013 by three women in their early 20s and 30s, Patrisse Cullors, Alicia Garza and Opal Tometi, who were joined in 2014 by thousands more after the police killing of 18-year-old Michael Brown,  in Ferguson, Missouri. Many of these protesters were students. After the shooting at Marjory Stoneman Douglas highschool in Parkland, Florida, a march was launched by student survivors to raise awareness of gun violence. Some students, including Cameron Kasky, Alex Wind, Emma González and David Hogg became vocal activists who influenced hundreds of similar events across the nation and around the world.

History has made it clear that student activism is not a force to be overlooked. Student solidarity, grit and passion have changed and will change the world. Now the world needs this generation of students’ help.

“If not you, then who? If not now, then when?”  The answer to these questions are quite simple. You, the student, right now, should stand up for issues you believe in. History might just be made with your he