From cancel culture to changing culture 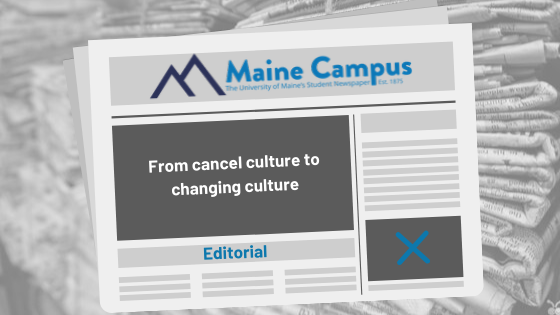 What do big-name celebrities like James Charles, Taylor Swift, James Gunn, Laura Lee, Kayne West, PewDiePie, Roseanne Barr, Shane Gillis, Logan Paul have in common? They have, at one point in their careers, been “canceled.” Hoards of their social media followers took to Twitter, Facebook and Youtube to hurl insults and declare the celebrities “canceled.” Each of these celebrities has become the target of cancel culture. But what exactly does that mean?

Cancel culture is defined by the holy grail of internet slang, the Urban Dictionary, as a “modern internet phenomenon where a person is ejected from influence or fame [because of] questionable actions. It is caused by a critical mass of people who are quick to judge and slow to question.”

Perhaps a more sophisticated explanation comes from the New York Times article “Everyone is Canceled.” Author Jonah Bromwich’s own definition is explained as. “an act of cancellation is still mostly conceptual or socially performative.” In other words, internet users hop into the mob-mentality that surrounds canceling a certain individual, and the actual act of canceling usually comes in the form of a trending hashtag, angry tweets, or a user’s status that denounces the artist, comedian, YouTuber or celebrity.

Take the cancellation of Taylor Swift for example. In Kanye West’s music video for his song “Famous,” released in 2016, he made references to having sex with Swift, who later stated she did not approve of some of the lyrics. But later, after Kim Kardashian West released a phone call with Swift seemingly contradicting her own statement, the hashtag “#TaylorSwiftIsCancelled” hit the internet by storm. Despite the swarm of hatred Swift received, the majority was “socially performative,” to use Bromwhich’s words. Swift’s first album after the incident, “Reputation,” sold 2 million copies in the first week after its release. On the internet, Swift was canceled, but in real life, people still bought her music.

Another instance of the cancellation came when famous comedian Kathy Griffin posed with a Donald Trump mask with what appeared to be blood dripping from his neck (it was later revealed by Griffin to be ketchup) in 2017. The photo drew immediate criticism and resulted in professional consequences for Griffin. Even though Griffin released an apology stating that she “crossed the line” and “went way too far,” her comedy tour was canceled and she was placed under investigation for conspiracy to assassinate the President of the United States, according to an article by CBSNews. Additionally, she was placed on the “no-fly list” and was fired from co-hosting CNN’s New Year’s Eve special with Anderson Cooper — a job she had held for years.

While Griffin’s cancellation came with more permanent consequences, both Griffin and Swift underwent emotionally turbulent times. Swift endured being called a “snake,” “manipulative,” and as Swift put it in an interview with Vogue magazine, she was being sent “mass amounts of messages” telling her to “either shut up, disappear, or [as] it could also be perceived as, kill yourself.”

These two women were canceled by society and suffered emotional and professional consequences. But what about when the internet cancels someone over racism, sexism, insensitivity or homophobia?

Comedian Shane Gillis has been in the headlines recently after being fired from Saturday Night Live just days after being hired. NBC announced his termination after light was shed on racist, islamophobic and homophobic remarks Gillis made on his podcast, “Matt and Shane’s Secret Podcast,” in 2018.

People immediately took to Twitter with angry responses, and rightfully so. The comments made by Gillis harmfully and unjustly targeted minorities and were in no way acceptable. But the positive impact of “canceling” Gillis remains unseen. The statement released by the comedian is far from apologetic. In a tweet released shortly after the announcement of his termination, Gillis states: “it feels ridiculous for comedians to be making serious public statements but here we are. I’m a comedian who was funny enough to get SNL. That can’t be taken away. Of course, I wanted an opportunity to prove myself at SNL, but I understand it would be too much of a distraction. I respect the decision they made.” There’s not an utterance of “I’m sorry” in sight.

Later, he released another statement on Twitter, defending himself by saying “I’m a comedian who pushes boundaries,” and that he was “happy to apologize to anyone who’s actually offended by anything I’ve said. My intention is never to hurt anyone but I am trying to be the best comedian I can be and sometimes that requires risks.”  Again, not much of a true apology. It seems that even though Gillis was canceled, he did not learn from his mistakes.

Which begs the question if cancel culture actually does what it intends to do: hold people accountable. James Charles and Logan Paul still make Youtube videos. Taylor Swift and Kayne West still sell successful, Billboard chart-topping albums. It seems as if our cancel culture has entered us into an infinite circle.

A well-known figure is found to have participated in or said something problematic, the people take to the internet with their outrage, and an apology is issued; sometimes sincere, and sometimes not. But then the cycle repeats itself. How can we tell if cancel culture is actually leaving room for individuals to grow from their mistakes? Or if it even motivates them to do so?

Kimberly Foster, founder, and editor-in-chief of For Harriet, a YouTube channel that celebrates “the fullness of black womanhood,” released a video arguing that we “cannot cancel everyone.” In her video, Foster states that instead of cancel culture, where individuals are pressured by the mobs to disappear and never return, we should encourage changing culture. Foster states, “changing culture meaningfully means approaching folks from the standpoint of ‘these harmful ideas you are perpetuating need to go’ and that ‘we’re not going to accept this anymore. But the people themselves can be recovered.” Individuals may be more willing to self reflect and make changes in their morals and values if they are approached with the mindset: “hey, you messed up, but we will forgive you and continue to support you if you change,” instead of “you messed up and we will never forgive you.”

The purpose behind cancel culture may be productive, but the execution must be changed if we want to live in a time where privileged people of power and influence are held accountable for their actions. Without this change, it is unclear whether people will actually change for the better or just continue to view themselves as the victim of an angry, irrational internet mob.