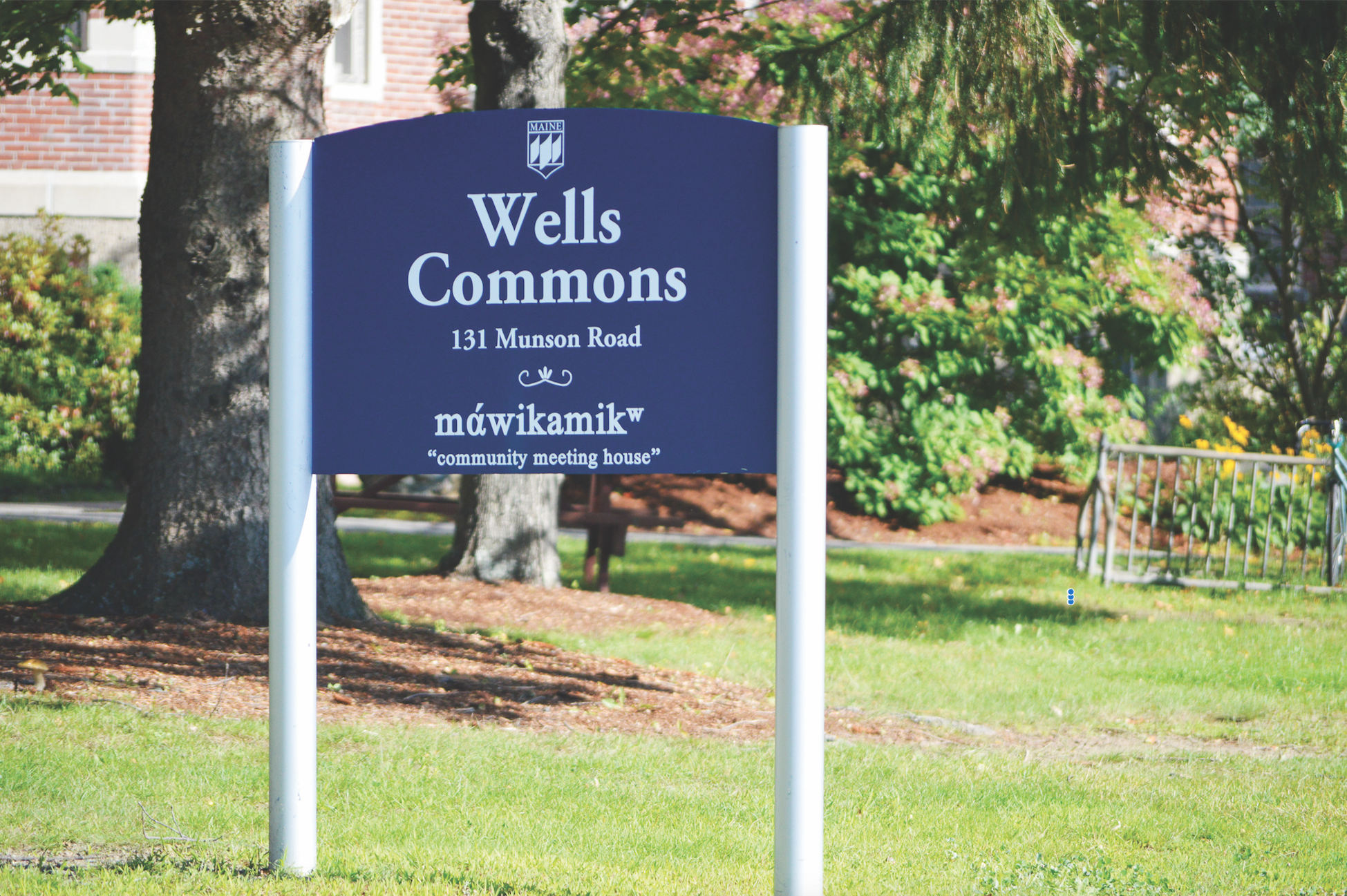 The sign located in front of Wells Commons is one among many across campus to be given its Penobscot translation. Photo by Haylee Scovil

The bilingual signs can be seen at various locations around campus. These areas, including the Wells Conference Center and the New Balance Student Recreation Center, have names in the Penobscot language printed below the English name. The Wells Conference Center is referred to as “mαwikamikw,” which translates to “community meeting house,” and the New Balance Student Recreation Center is translated to “αttali-milahəyαwələtimə,” or “place where you play a variety of games.”

Bonnie Newsom of the UMaine Anthropology Department indicated that “integrating the Wabanaki language into the day-to-day lives of the campus community celebrates the unique character of the University of Maine.”

“It’s a real privilege for this campus to be able to share such a beautiful language with the students, staff, and visitors,” Newsom said.

Newsom works as an assistant professor of anthropology researching Indigenous culture, with specific interest in the “pre-contact lifeways on Maine’s Native peoples.” During this past summer,  Newsom served as the director of a field school located in Machias that conducted research on archaeological sites and aided in the preservation and integration of indigenous language with the Passamaquody peoples who live in the area. More information on Newsom’s research and her publications can be found on the UMaine Anthropology Department’s website through the UMaine homepage.

This addition to campus is a significant change that is close to the hearts of many people on campus, including Newsom. Being of indigenous heritage herself, she mused about feelings of being a “foreigner on her own land” and how the new Penobscot language signage around the campus aids in lessening that.

“The signage may seem like a small representation of the Wabanaki connection to campus,” Newsom commented. “But for me, it’s an important reminder that my ancestors taught here also.”

This is just the first step in a larger ongoing project in the works at UMaine. The hope is that the final product of this project will remind the students and surrounding community members that UMaine actually sits on Wabanaki land, and will extend the knowledge of the Penobscot culture well past the UMaine campus.

“The Wabanaki signage project acknowledges the deep connection Wabanaki peoples have with the campus landscape. Native people have been living in the Penobscot River valley for at least 10,000 years and I view the Wabanaki signage as a reminder to contemporary peoples that the history of our campus goes way beyond the first buildings built here,” Newsom said.

There are traces of the university’s rich Penobscot culture around campus, including the Hudson Museum located right on campus. The museum’s rotating exhibits provide a glimpse into the vibrant Wabanaki culture of Maine. Along with the exhibits, there are also many courses that are offered at the university that delve deeper into the heritage of the Native people across Maine for those who would like to learn more about Native history and culture.