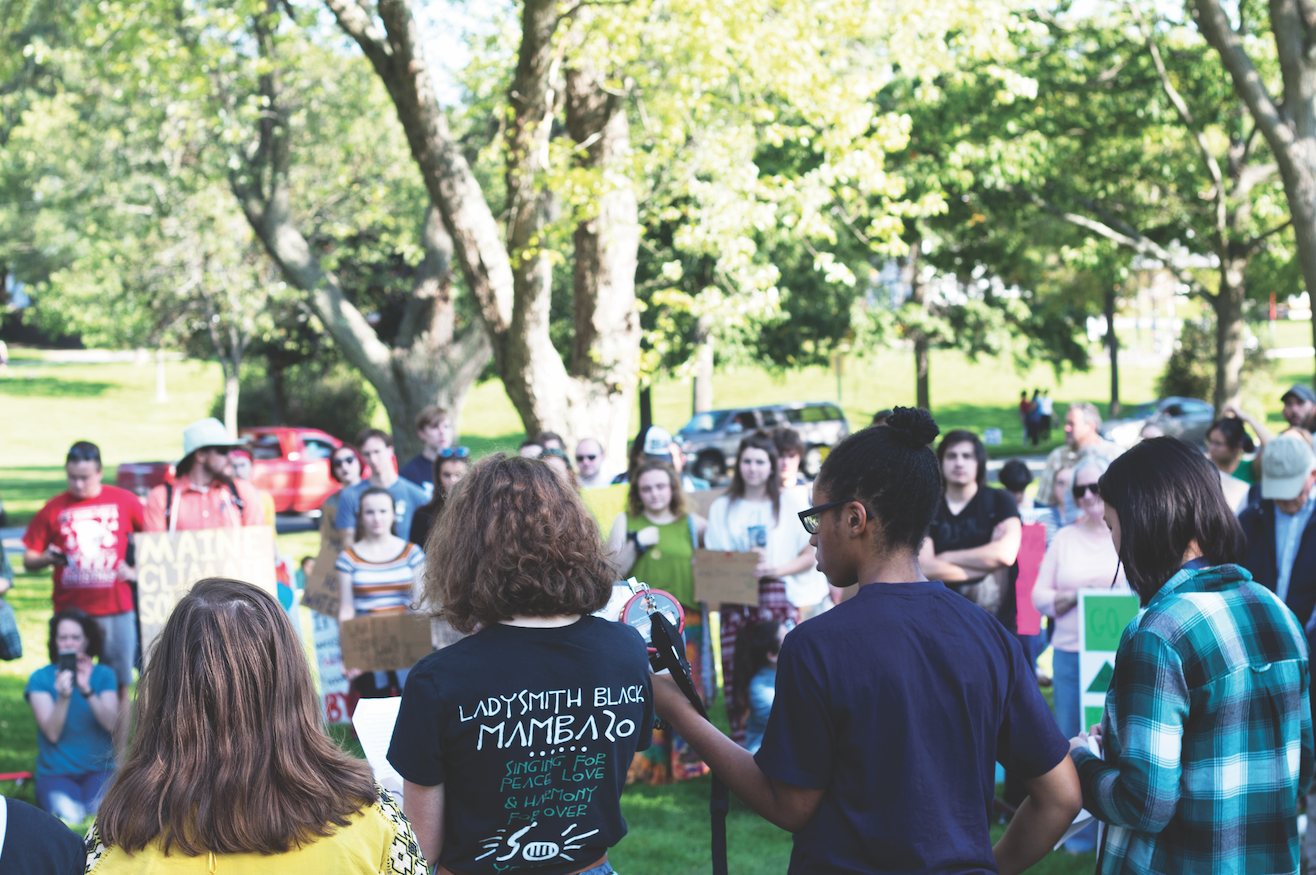 On Friday, Sept. 20, students from across Penobscot County gathered in Bangor’s Broadway Park to address the issue of global climate change. Bangor’s Climate Strike was one example of the many simultaneous strikes that took place during the worldwide Global Climate Strike from Sept. 20-27. The strike serves as an opportunity for a week of action to demand an end to the age of fossil fuels, and at least four million people walked out of their workplaces and homes to join young climate strikers on the streets.

The strike was organized by the nationally recognized climate activist Greta Thunberg. The 16-year-old Swedish student advocated for the climate strike on Sept. 20 to directly precede the emergency climate summit held by the United Nations on Sept 23. Organizers plan to strike again on Sept. 27. These two days of striking are, according to the global strike’s organizers, “only a beginning to the sustained mass mobilization that will be needed to take action in line with climate science and justice.”

Second-year economics and political science student Kevin Fitzpatrick, who is also the chair of UMaine’s Young Democratic Socialists, explained that his originally planned walkout on the University of Maine Mall had instead been merged with the Bangor Strike in Broadway Park. The strike in Broadway Park was organized by local Bangor High School students, lead by Ijeoma Obi, a senior.

“Climate change is the most pressing issue in our world today, as people suffer catastrophic consequences, such as more frequent freak weather events, today, and will only suffer more going forward,” Fitzpatrick said. “Striking is necessary because it can lead to substantial change.”

Students from many of UMaine’s departments showed up at Broadway Park to speak on the issue of climate change. While many members of the Bangor community showed, students from UMaine’s environmental sciences, journalism and political sciences departments all took a turn with the megaphone to note how climate change would affect their lives and the world that they live in.

When asked what young protesters can do to influence national and international climate policy, Fitzpatrick encouraged his fellow students to get out and be loud and say to those in power that they won’t stand for the continued profiteering of big business as they destroy the one world we have.

“While I support the use of metal straws and conserving water, people need to take on the companies who are polluting and destroying the planet far more than any amount of working-class people,” Fitzpatrick noted.

Paul Mayewski, of UMaine’s Climate Change Institute, observed that “it is very encouraging to see young people all over the world recognizing that climate change is not only real but that it is happening now and that waiting to respond is not a reasonable course of action.”

Mayewski has published multiple articles on the effects and expectations of global climate change, all of which echo his refrain that the age of climate decision is here, and our actions will define the course of our planet and civilization. Some of these articles can be found on his website, climatechangeinsights.org, where he has uploaded many examples of visual and statistical climate data. Mayewski is also the co-author, with his colleague Michael Morrison, of the book “Journey Into Climate,” a collection of adventure stories that relay their personal experiences in some of the planet’s most remote and desolate locations. Both professors explain throughout the book that although they had once believed humans to be incapable of affecting the earth’s climate in any significant way, they have since realized that such is not only the case but happening more rapidly than anyone once thought.

UMaine’s associate dean of research and professor in the School of Earth and Climate Sciences, Christopher Gerbi, connected the overarching issue of global climate change and its impacts with the more familiar areas of Maine’s coastline.

“Climate change is real, and its effects are significant and immediate,” Gerbi said. “Just to pick one example, the Gulf of Maine is one of the fastest-warming bodies of water in the world. Such rapid change has a major effect on the fisheries, including lobster, which in turn affects the economic stability of our coastal communities.”

UMaine’s Climate Change Institute, located in the Bryand Global Sciences Building, is one of the oldest climate research units in the United States and offers a variety of graduate and undergraduate research programs. Contributors to the Climate Change Institute have appeared on local news programs to share their expertise and have conducted significant research in the planet’s most immediately affected areas, including Greenland and Alaska. Much of their research can be found online at, cci.icecoredata.org