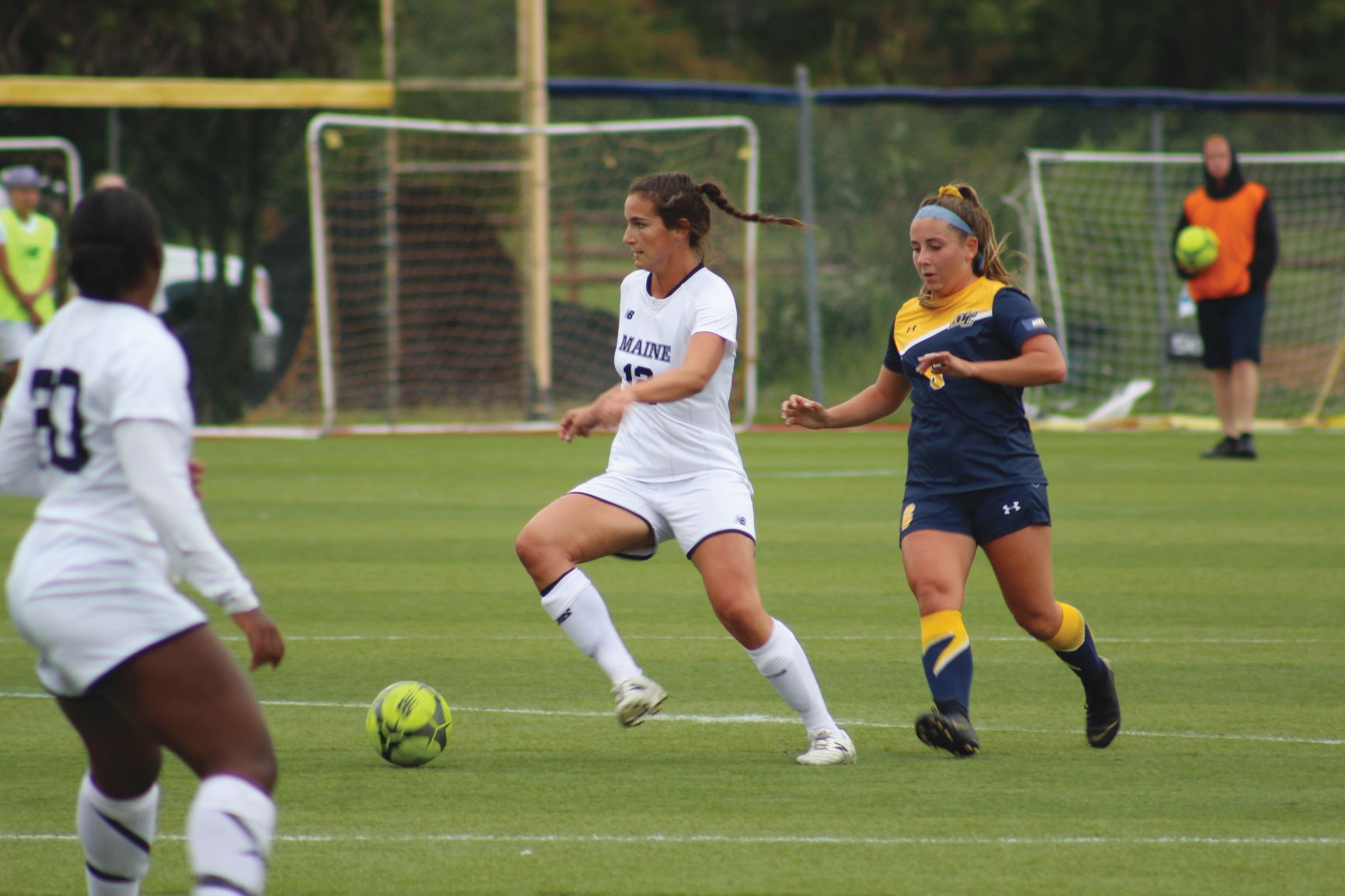 The University of Maine women’s soccer team has had a wild beginning to their season already, facing off against three teams this week, resulting in three victories. The Black Bears played the Bryant University Bulldogs on Sunday, Sept. 1, the Saint Peter’s University Peacocks Wednesday, Sept. 4, and the Merrimack College Warriors Saturday, Sept. 7.

The first game of the week was played at home and saw little action in terms of scoring. Both teams played extremely hard defense, with some action seen by both keepers. The Bulldogs had more shots on net in the first minutes of the game, however, this soon evened out. About 35 minutes into the game, Maine scored off a penalty kick. Fourth-year midfielder Emilie Andersen took the shot and found the back of the net. The rest of the game saw Maine lockdown on defense, limiting Bryant’s shots on goal to a single attempt in the second half. Maine came out of the second half with a 1-0 win.

Maine played their second game of the season in Jersey City, New Jersey against the Peacocks. Maine came out dominating the field, finding many opportunities, but failing to land a shot on goal. That was until the 20-minute mark when Andersen crossed the ball into the box off a corner kick to find second-year defender Susannah Gaines. Gaines placed the ball off of an expertly timed header into the net. This put Maine up 1-0. Maine scored their second goal just minutes into the second half. The goal was scored by second-year midfielder Hannah Bamford. The assist came from second-year forward Emma Donovan who saw an open Bamford for the well-placed goal.

Maine faced Merrimack College in their third game of the season at home. In an exciting contest, the Merrimack Warriors led the entire first half despite the 3-1 final score. The first half saw the Black Bears take more shots; however, they couldn’t get past fourth-year goalkeeper Erin Fulton. The lone goal for the Warriors was scored by third-year forward Taylor Robertson at the 30-minute mark. The score remained for the rest of the half, with Merrimack going into halftime on top. During halftime Maine pulled together and returned to the field ready for a come back. The first goal of the second half was made by fourth-year forward Kayla Brace. Brace’s goal tied the game and started the momentum that would win Maine the game. The goal was scored at the 69-minute mark by second-year forward Gaby Panagakos and assisted by fourth-year Forward Nicole Bailey. This goal was then followed by another just two minutes later to put Maine up by two goals with 20 minutes left. This goal was scored by second-year midfielder Julia Mahoney and assisted by Bamford. The huge goal put Maine in a comfortable spot and ended the scoring for the night with Maine walking away with a third straight win.

The next game will be away in Poughkeepsie, New York on Thursday, Sept. 12. The team will be playing Marist College and will be looking for a fourth straight win. Marist College is 2-2, with a home-field advantage, making exciting stakes for the contest.

Editorial: Two-thirds of college first-years experience homesickness: it’s okay to call your parents
How living in Italy helped me find a home in myself

With NFL done for the…

The University of Massachusetts Lowell…