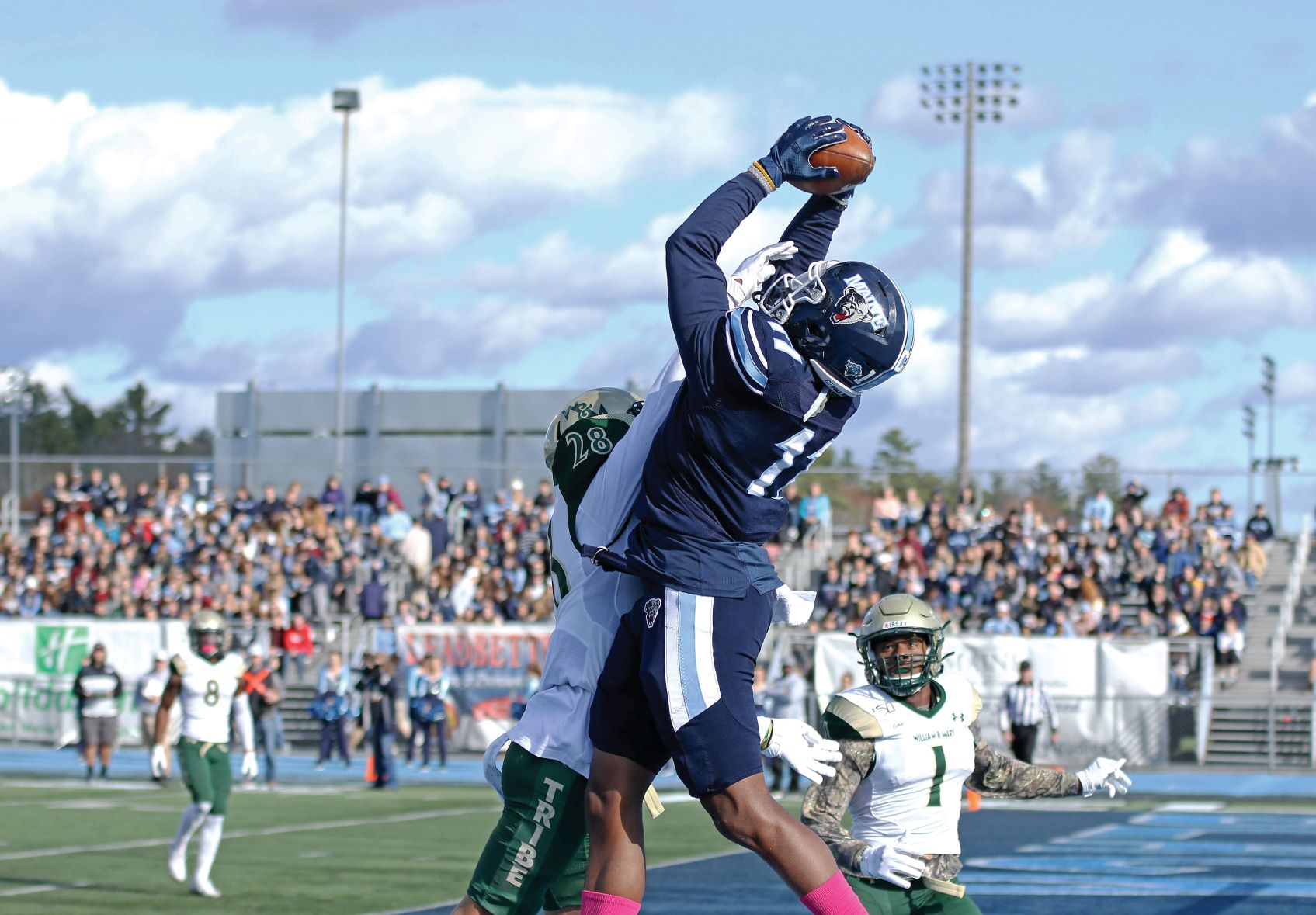 The University of Maine Black Bears football team took the field on Saturday, Oct 26, hosting the William & Mary Tribe for Maine’s homecoming weekend. In front of thousands of alumni, students, and staff, the Black Bears didn’t disappoint, routing the Tribe by a score of 34-25. The victory was Maine’s first within the Colonial Athletic Association (CAA), while the Tribe moves to 0-4 in the conference.

Since taking over under center for the injured third-year starting quarterback Chris Ferguson, true first-year quarterback Joe Fagnano has performed admirably under center, and against the Tribe, he followed up his best performance against Liberty with arguably his most efficient performance to date, completing 15 of his 22 passes, good for 249 yards and two touchdowns to zero interceptions. Fagnano did well carving through the Tribe’s secondary, throwing long completions to fourth-year wide receivers Jaquan Blair and Earnest Edwards, both of whom went for scores of 64 yards and 67 yards, respectively.

On the ground, Maine continues to work on improving the rush attack behind a road-grading offensive line. Anchored by All-Conference third-year guard Liam Dobson, the Black Bears big bruisers in the trenches pushed the Tribe’s defensive front four around the majority of the day, leaving their linebacking core to take on third-year running back Joe Fitzpatrick in the gap, an assignment that is easier said than done. Fitzpatrick gashed through the Tribe at 4.4 yards per rush, netting 57 yards on the ground and a touchdown for the day. Fagnano added 42 yards of his own on the ground, helping Maine ice away the game after taking the early advantage.

Maine’s defensive front and special teams worked hand-in-hand with the offense, as the defense held the Tribe to just five conversions on 16 third-down attempts. Additionally, with under three minutes left in the second quarter, while holding a nine-point lead, head coach Nick Charlton elected to execute a fake punt on fourth and six. Receiving the snap, fourth-year punter Derek Deoul dropped back and uncorked a seven-yard pass up the middle to first-year tight end Shawn Bowman, giving the Black Bears a fresh set of downs they used to help run out the quarter.

The Black Hole showed up exactly when it needed to, led by fourth-year defensive lineman Kayon Whitaker, who feasted on the Tribe’s offensive line and sniffed out multiple runs in the backfield. Whitaker finished his day with 11 total tackles, with four being for loss, while also bringing down Tribe first-year quarterback Hollis Mathis for a sack. Whitaker forced and recovered a fumble as well, putting together a complete performance while his teammates took down any rushers outside of the tackle box.

Mathis finished his day completing only four passes on 22 attempts, for a paltry 68 yards, no touchdowns and no interceptions. Between Maine winning the battle in the trenches and a stingy secondary sticking to William & Mary’s wide receivers, Mathis had nowhere to go through the air and elected to try his luck on the ground. Though Mathis was elusive, often slipping the first tackler, Maine’s Black Hole consumed him as they do every quarterback, limiting him to 2.6 yards per carry on 19 attempts. Second-year running back Owen Wright faired much better against Maine’s front seven, gaining 77 yards on 13 attempts, good for 5.6 yards-per-carry.

Down 28-12 heading into the third, the Tribe continued to grind away with keeping the ball on the ground,  a questionable but surprisingly effective move. William and Mary dropped 226 total rushing yards against Maine, following a trend that continues to move backward for Maine; after leading the conference in run defense last year, Maine now allows opponents an average of 177.6 rushing yards per game, which is good for the bottom third of run defenses in the conference. The Tribe made the game respectable, as Mathis found paydirt on a 16-yard scamper, and Wright found paydirt on another drive late in the fourth.

Maine, after finally snapping their three-game losing streak, hit the road for their next two weeks, first against Albany and then the other against Elon, before playing their final home game of the season against the University of Rhode Island on Saturday, Nov 16. Their final contest of the season will send the Black Bears to Durham, New Hampshire for the border battle against the University of New Hampshire Wildcats.

Leaving California citizens in the dark is not the right option to fight wildfires
Unfair Trade: Why the USMCA is just a buy for Trump’s second term