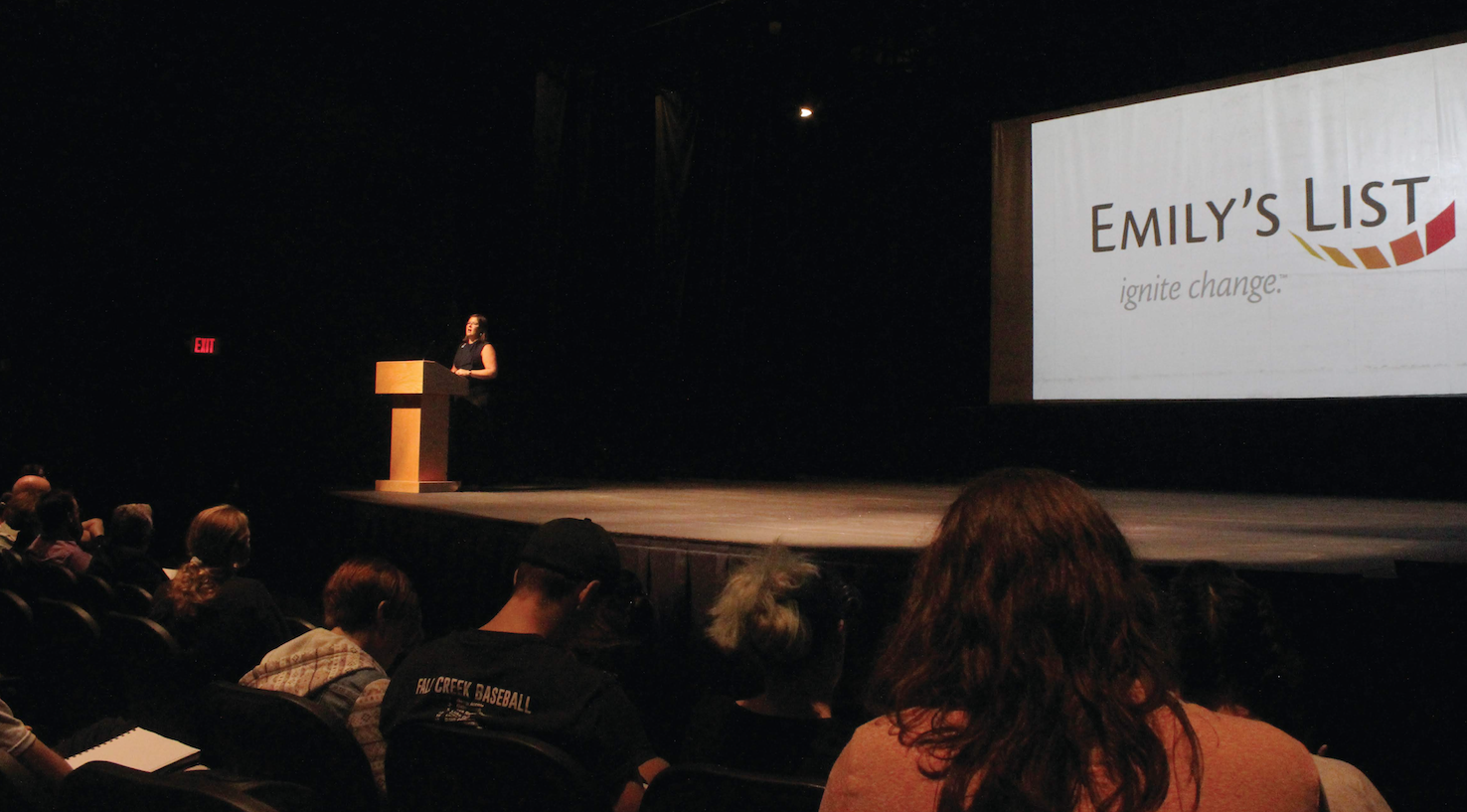 On Tuesday, Sept. 24, the University of Maine community gathered in the lobby of the Class of 1944 Hall, just in front of Hauck Auditorium. It was a bustling and lively scene, filled with students, faculty, alumni and supporters of the university. Each person in the room was there for the same reason; to listen to a lecture delivered by Emily Cain, an executive director, politician and UMaine alumna.

Cain has made her mark on both local and national politics many times throughout her life. At only 24 years old, Cain was elected in District 19 to the Maine House of Representatives. She served eight years in the Maine House of Representatives, before being elected as a State Senator for District 30 in 2012. After serving a decade in the Maine State Legislature and running two unsuccessful campaigns for U.S. Congress, Cain became the executive director of the Political Action Committee (PAC), EMILY’s List.

At Hauck Auditorium, Cain extensively discussed her career in politics with the audience to a full house. Citing Charlie Salvin as her inspiration, Cain talked to the audience about her success as the state’s youngest legislator. She also detailed the journey that she undertook to become the first woman Floor Minority leader of Maine, noting that she “passed good laws and balanced budgets” throughout her career.

Cain then described the work she has done as the executive director for EMILY’s List — a PAC that helps elect Democratic, pro-choice women — and how it has helped many women around Maine. She noted that since she had accepted this position in 2017, she has brought about progressive changes. During Cain’s time as the executive director, the staff of EMILY’s list had increased by 30%, and 49,000 women had reached out to them for campaign assistance within the past year. EMILY’s List has also helped elect dozens of women during the 2018 election cycle. According to Cain, “40% of these women were women of color.”

For Cain, allowing women the opportunity to run for office and win is important.

Within the past year, the gender gap has been closing in the political arena. More women are running for offices and being elected than ever before. Cain takes pride in her work with EMILY’s List to help more women succeed in politics.

“The good news is, women are coming to run for office, and I am so excited that at EMILY’s List, we can play a role in helping them get started and then win their races,” she said.

Many of Cain’s supporters also see gender equality as something to strive for and are hopeful for the change that programs like EMILY’s list may bring. Lauren Turcotte, a first-year student of the UMaine Honors College finds inspiration in the fact that there are more women in politics. She acknowledged that it makes a huge difference for young women to see strong role models in political positions of power.

“I think a nation isn’t equally represented until every single person who needs representation is in those positions in politics,” Turcotte said.

Virginia Hugo-Vidal, a political science and international relations double major, aspires to become an elected official. Cain’s work with EMILY’s List is a source of inspiration for her.

“Women cannot succeed without EMILY’s List doing the work it does, because by electing pro-choice, Democratic women, it gives women the stability they need in politics,” Hugo-Vidal commented.

Both Turcotte and Hugo-Vidal find the work Cain has done with EMILY’s List to be inspiring, and feel as though representation is necessary in the current political climate.

Even considering all of the country’s gains, Cain made it clear that there is still a lot to be done. Gender inequality is still a very prevalent issue, especially in the political arena.

“Women make up over half the population, and not even 25% of congress,” Cain noted. According to the Center for American Women And Politics, men still dominate the American political system. Throughout American history, only four women have served on the Supreme court, 25 have held seats in the Senate and 102 have held seats in Congress. This means that women make up only 23.7% of both levels of Congress and 33% of the Supreme Court.

Cain, whose work has inspired and enabled women to break through the glass ceiling into the world of politics, delivered a rousing lecture. Cain taught the UMaine community valuable information about the work she’s done for women in politics with EMILY’s List all while encouraging the progress and development of women’s rights, leaving the audience informed, inspired and ready to take action.