In the wake of injustice in Hong Kong, Lebron James serves as a worthy scapegoat

Home /Opinion/In the wake of injustice in Hong Kong, Lebron James serves as a worthy scapegoat 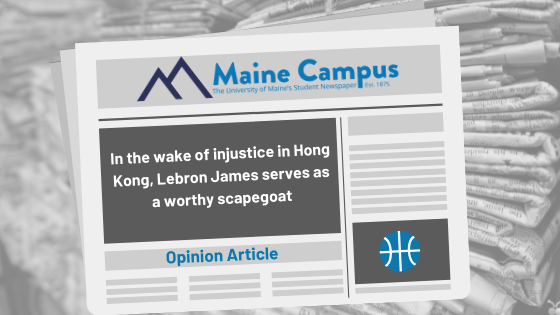 Over the past weeks, the political protests in Hong Kong have generated sympathy in the American public. But the American media seems content to lob its attacks at Lebron James rather than criticising China itself. It all began on Oct. 4, when the general manager for the Houston Rockets, Daryl Morey, posted a tweet, since deleted, which conveyed support for anti-communist Hong Kong protestors. In reaction, before the preseason match between the Golden State Warriors and the Los Angeles Lakers, James asserted of Morey that “I just think that when you’re misinformed or you’re not educated about something, and I’m just talking about the tweet itself, you never know the ramifications.” The backlash to James’s dissent was swift but the fact of the matter is that rage has been woefully misdirected.

These tensions between Hong Kong and China are nothing new; the former British colony fell under the communist regime’s umbrella in 1997, and since then, the country has been operating under a “one country, two systems” government where the people of Hong Kong are granted specific rights found nowhere else in China, such as free speech, uncensored internet access, and free assembly. China promised to maintain this system until 2047, but there has always been a contingent of Hong Kongers that have bristled under what they perceive to be a steady encroachment upon their rights by Beijing, especially under Carrie Lam, the chief executive of Hong Kong who is widely believed to have pro-Beijing sympathies.
This tension hit a breaking point in February when a bill was introduced that would allow Hong Kongers to be extradited and tried for crimes in mainland China. Peaceful protests began on June 9, but since then, demands and altercations with police forces have escalated dramatically. According to a New York Times profile on the events surrounding the protests, “China has started to turn public opinion against the protesters,” and the Daryl Morey’s tweet served as a fine opportunity for the Chinese government to further propagate their characterization of the protesters as violent rebels.

With this knowledge of China’s messaging campaign, it’s easy to frame Lebron James and his statements on the Morey tweet as “selling out,” as ESPN sports debate show host Max Kellerman dubbed it on the show “First Take.” The Lakers star has also received relentless criticism on Twitter, and was even parodied on the Comedy Central show “South Park.” The fact of the matter is that James, for all his fame and athleticism, is really just the face for the NBA business. He is a player, and as he later clarified on Twitter, he did not appreciate being thrust into the role of political commentator in a country which generates 15%  of the NBA’s total revenue, possibly compromising his future business opportunities in the process.

While James suffers the brunt of the criticism for the NBA, the commissioner for the association, Adam Silver, gets away with putting out seemingly pro-Hong Kong statements like, “the values of the NBA — the American values, we are an American business — travel with us wherever we go. And one of those values is free expression.” While James may admit to not feeling secure enough in his business interests to support Hong Kong’s protesters, Adam Silver has the gall to pretend as though American values somehow weigh upon the decisions of a multibillion-dollar business. The situation seems like a dull echo of bipartisan efforts to pass bills condemning supporting Hong Kong protesters and condemning China’s interference, which, according to Bloomberg, will “have limited impact.”
It’s hard to believe the NBA’s posturing when they rely on income from China, and the situation is just the same with our own government’s reliance on trade with the nation. It is easy to criticize the idols that stand front and center, but far harder to recognize the hypocrisy of the machine behind that idol. The sad reality that Lebron James may be more resigned to before most of the public is that while actions speak louder than words, money speaks louder than actions.