Joker: the film we never knew we needed

Home /Opinion/Joker: the film we never knew we needed 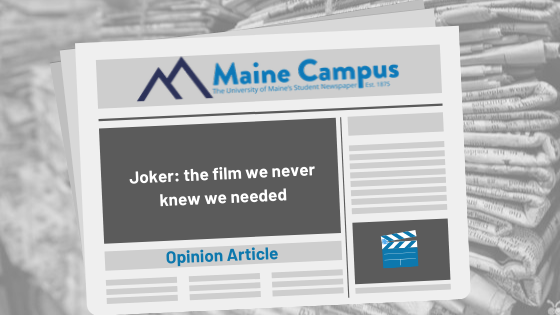 As a producer, director, or actor, you never know how the studio or audience will react to your project when you work in the film industry. Ever since the team behind “Joker,” directed by Todd Phillips, began writing a script, the film faced an uphill battle from within Warner Bros. Studios.

A harrowing, R-rated depiction of the most diabolical comic-book villain of all time was a hard sell for Warner Bros. executives to back. Phillips elaborated on the film’s internal production in an interview with the Los Angeles Times: “It was a yearlong process from when we finished the script just to get the new people on board with this vision … there were emails about: ‘You realize we sell Joker pajamas at Target.’ There were a zillion hurdles, and you just sort of had to navigate those one at a time.” From the beginning, Joker as an R-rated film was destined for internal studio controversy but the reaction from mainstream film critics has been nothing short of fascinating.

According to the popular review site Rotten Tomatoes, Joker currently sits at a 70% fresh rating from critics with 270 of them being in the positive, while 117 are in the negative. At one point, the rating averaged around 88% from critics when the film debuted at the Venice Film Festival where it took home the Golden Lion, the top prize awarded at the festival.

After “Joker” had its North American debut for critics, the film’s rating dropped significantly. Why was this? It is fair to say that “Joker” is 2019’s most controversial film, and the year is not even over yet. The criticisms the film has been receiving from mainstream reviewers are shrouded in political discourse which is not an appropriate way to judge this film.

In one review Leah Greenblatt of Entertainment Weekly claimed that as a film: “… [“Joker”] feels too volatile, and frankly too scary, to separate from the very real violence committed by young men like Joaquin Phoenix’s Arthur Fleck in America almost every day.” Kathleen Newman-Bremang of the site Refinery 29 had a similar opinion of the film as she stated in her article: “I couldn’t enjoy the film, even though I concede that it’s really well done. The message that ‘well, of course he became a mass murderer, society gave him no choice!’ is dangerous on its own. But if you consider the larger social context of turning ‘a supervillain into a kind of folk hero’ in a world where Dylan Roof, Elliot Rodger and Faisal Hussain exist, it’s even more distressing.”

As someone who saw the film this past weekend, I can assure you that it is not dangerous whatsoever, although the film does depict violent and disturbing scenes. Personally, I believe “Joker” to be the most daring, raw, and realistic depiction of a comic-book universe since Christopher Nolan’s “The Dark Knight,” and it elevates the very standard of filmmaking as a whole.

In response to the critics mentioned before, to connect a fictional comic-book film to real-life violence committed by young men in America in order to further a political point is not only poor journalism, but it is frankly disrespectful to the hundreds of people who worked to create this masterpiece of a film. It is almost as if everyone forgot who the Joker character truly is: a psychotic, mass-murdering clown who enjoys injecting chaos into people’s lives.

Joker is an excellent example of a perfect film released at possibly the worst time. Since viewing the film is equatable to looking into a mirror of our world, some feel that it is dangerous to depict due to the risks it poses. Despite the film’s controversy, to the 92% of audiences on Rotten Tomatoes who thought this film was incredible, “Joker” is the comic-book film we never knew we desperately needed in an industry and a world that plays it too safe.

Maine women’s hockey off to hot start
Editorial: Why do we still need to defend Indigenous Peoples Day?

College should not be the…

The inside view: A concluding…

Editorial: Finding balance in an…