Maine’s struggling children and families need the support of the entire state government, not just a check for Child Protective Services

Home /Opinion/Maine’s struggling children and families need the support of the entire state government, not just a check for Child Protective Services 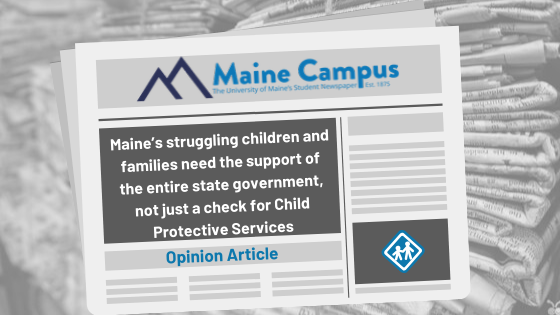 The Maine Office of Child and Family Services will soon be hiring 66 new caseworkers along with additional supervisors and support staff if lawmakers follow through on suggestions from Maine’s child welfare agency. This $11 million expansion of Maine’s Department of Health and Human Services (DHHS) workforce is largely in response to public outcry against Child Protective Services (CPS) over the high-profile deaths of two children already involved in the system in 2018. While these tragedies are more than deserving of the shock and revulsion which they were publicly met with, it is wrong for lawmakers to presume that exclusively throwing more money at a critically overwhelmed system will solve the state’s problems.

To be a social worker is, in short, a thankless profession. Caseworkers in CPS often face over-abundant caseloads, frequent overtime without pay, and severe shortages in foster placements. High risk youths, with no available foster home spots or nearby relatives, are frequently boarded in hotel rooms with two caseworkers for lack of other options. Recent increases in wages for caseworkers only go so far; money can’t buy more time in the day, and workers are often limited to a 72-hour window to investigate each report. The Office of Child and Family Services recently reported of the agency that, “evidence is clear that when staff are overworked … they are more likely to rush through their work.” One could say this goes for any job, but in CPS the stakes are enormously high.

As a partial remedy to an exacerbating issue, the increase in the workforce at DHHS is warranted and welcome. An example of the DHHS’ overtaxed workforce is the case of Kendall Chick. At the age of four, Chick had already been introduced to the child protection system as her parents were deemed unfit to care for her due to their opioid addiction. She was then put into the custody of her grandfather and his wife. While on the surface this move may have seemed to be the right one, as caseworkers are instructed to seek out relatives as possible destinations for a child rather than searching for a foster home situation, unfortunately, these relatives didn’t want their granddaughter and ultimately proved themselves grossly incapable of caring for her. Chick died in December of 2017 at the age of four and the judge ruled her death a murder as a result of “depraved indifference” on the part of her grandfather’s wife. Over the course of the three years during which CPS was in contact with Kendall, they checked on her situation with her guardians once.

During the trial of Chick’s murder, it was revealed that, just as her parents had been, both of Chick’s grandparents were addicted to opioids and had frequently discussed and sought out means to no longer have to care for their granddaughter. These are the sort of vital details that were missed that the public and legislators saw purely as a result of staff in CPS, and while that was a factor, Maine State Sen. Bill Diamond argued that “we need action from a number of different entities to address this issue, not just DHHS, but the courts, the legislature, and the law enforcement. We have to act now.”

If the workers who dealt with Chick’s case had been under a lighter caseload, they may have had more time to scrutinize the abilities of her grandparents to take care of her. With that said, these CPS workers were and are severely hamstrung by strict procedures, the word of judges and a foster system in need of reform. These are issues that cannot be solved by simply padding out a chaotic DHHS. Rather, Janet Mills and the state legislature need to pursue holistic and creative solutions while also providing consistent support to social workers. For an agency born to police negligence, the solution cannot simply be more negligence.