The college admissions scandal is outrageous, but absolutely nothing new 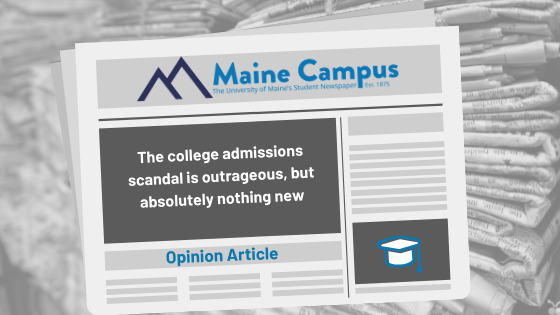 Back in March of this year, 50 people, including a few B-list celebrities, were charged with fraud, amongst other things, for attempting to bribe and cheat their children into prestigious college institutions. The reason that the “Varsity Blues” scandal, otherwise known as the reason the lady from “Full House” is in your newsfeed, has been so remarkable is not for its celebrity cast, but for the novelty of wealthy Americans being sent to jail for attempting to buy themselves, and more specifically their children, an unfair advantage.

There is a sort of satisfaction to the scandal for much of the public, in the same way that it is satisfying when you watch Harry Potter beat the Slytherin team at Quidditch after Malfoy’s father buys the entire team shiny new brooms. It’s just a delight to watch the defeat of an unscrupulous villain. However, life is not a movie, and these are parents, not villains. It’s easy to hate a cheater, but, as USA Today reports, these parents and their attorneys say they were mostly driven by something inconveniently sympathetic: desperation and love. Before their sentencings, many parents explained that they were driven by uncontrollable circumstances, often some sort of illness or condition which the child was suffering from. Thus, when the highly touted college applicant consultant William “Rick” Singer offered up some not so legal means to guarantee the currently nebulous future of their children, they jumped at the opportunity.

This isn’t a fantasy where the bad guys get what’s coming to them, this is a tragedy where real people make poor decisions with good intentions and they and their children inevitably suffer for it. Unfortunately, the reason the public eye will not view these individuals with any degree of sympathy is the same reason that the parents committed the fraud in the first place: the college admissions process is already ambiguous and unfair. Part of the problem, as the New York Times has assessed, is that numerous selective schools do not work to raise admission rates, even as the number of applications increases every year, as a means to “help burnish schools’ sought after status.” This isn’t to say that the wealthy do not still have a significant advantage, as being able to pay full price for tuition will always increase an applicant’s chances, but other methods, such as alumni donations, have grown less and less effective for parents as universities can afford to be more selective.

The culture that promotes the efforts of wealthy parents to take the side doors into admissions offices, the culture of consultants, prep-schools, and donations is the same which generates resentment and pessimism for those who are aiming for the same goals from more modest origins. This could be justified by the American brand of “when the going gets tough” thinking that brings out the numerous success stories of people from tough backgrounds who got into the Ivy Leagues every admission season. The idea that these prodigious students would be held in the same regard as the son or daughter of wealthy alumna who had every advantage granted to them leaves a sour taste.

At one point, College Board had intentions of implementing a numerical value for students to describe the difficulty of the background which they came from as a means to scale their applications, but the idea was widely criticized for attempting to simplify some of the most complicated aspects of students’ lives. For Harvard, applicants are now asked to explain to the admissions committee directly in their applications about the hardships they may face in their environment, but this method stands at risk for abuse and inaccuracy as well.

A solution that would be far more likely to work on the large scale, but far more difficult to implement, has been suggested by Rick Clark, director of undergraduate admissions at the Georgia Institute of Technology: “families should be more focused on the rooms they walk into every day, i.e. their kitchens, living rooms, classrooms, than admission committee rooms they’ll never enter.” It’s understandable that these parents initially felt justified in the great lengths they went to in order to ensure the success of their children, but it is that very idea of success which must be re-evaluated.