The US used, backstabbed and abandoned its greatest ally in the Middle East

Home /Opinion/The US used, backstabbed and abandoned its greatest ally in the Middle East 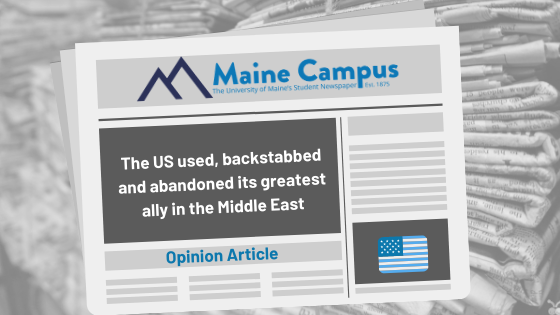 On Oct. 9, Turkish forces moved over the Turkey-Syria border in a planned operation to remove a freedom-fighter group known as the People’s Protection United (YPG). The YPG is a Kurdish paramilitary group that fought for Syrian independence during the Syrian Civil War. During this conflict, the group became a keystone member of the Syrian Democratic Forces (SDF), the main rebel fighting group in the war. As the focus of the conflict shifted, so did the purpose of the SDF and the YPG, and soon American soldiers and military advisors in northeastern Syria found themselves fighting alongside the YPG to clear the Islamic State (IS) out of Syria.

After years of fighting, the YPG, SDF and US-led coalition effectively ousted the IS in March of 2019. Turkey soon announced the plans to send forces over the Syrian border to clear the YPG and SDF within 30 miles of Turkey’s border with Syria. On Oct. 6, Trump announced he would allow Turkish President Erdogan to undertake this operation against the advice of his cabinet. The invasion Trump endorsed has cost lives, stability in the region and the respect of the international community.

After having fought alongside the SDF and YPG as allies for years, the fact that President Trump has issued an order to effectively abandon the fighting force made up of an ethnic minority fighting for cultural and political autonomy is despicable. The United States was built on men and women who fought for independence, liberty and a better way of life. Trump, the leader of a country that proclaims itself a beacon of freedom and liberty in the global community, left our greatest ally against terror in the Middle East to fend for themselves.

The Kurdish fighting men and women filled in for fleeing Iraqi forces in 2014, defeated the final Islamic State stronghold in Syria and repelled an all-out IS attack on the town of Kobane in Syria after Turkey refused to assist and even kept Turkish Kurds from crossing the border to help in the fight. The YPG are by no means an incompetent group, and US military advisors even considered the YPG the safest choice of all local militias in Syria to aid the US Army in the fight against IS. Even so, they don’t stand a chance against the Turkish military, a force bent on destroying Kurds since the early 20th century over inter-ethnic feuds nobody can even remember anymore.

Trump opened the door for an invasion so chaotic that U.S. forces who weren’t removed from the buffer area were almost struck by Turkish artillery. In fact, many of the military personnel present believed that the Turkish military knew what they were doing and fired 155mm shells at American personnel as a warning to leave the buffer zone.

The facts are simple, and they speak for themselves. At Trump’s behest, our country left a group fighting for their own freedom to fend for itself against a force it cannot possibly defend itself against. The president of the United States has shown himself yet again to be a pushover for foreign leaders and their interests, and the international community will not overlook this. When Turkish military units fire on American troops in the interest of destroying an ethnic minority in a foreign nation, people should take notice.

But the fact of the matter is that most of the country has come to expect acts like this from our president. We have become so used to the utter lack of empathy and disregard for human life coming from the Oval Office that using the Kurds and discarding them like a broken tool when we’re done barely registers.  Eliot Engel, house foreign affairs chairman, best summarized what every American should be thinking: “What kind of message does this send to the world? How can America be trusted to keep its word when we betray one of our close partners?” But at least Trump promised sanctions on Turkey once the uproar started, so that fixes everything. Right?