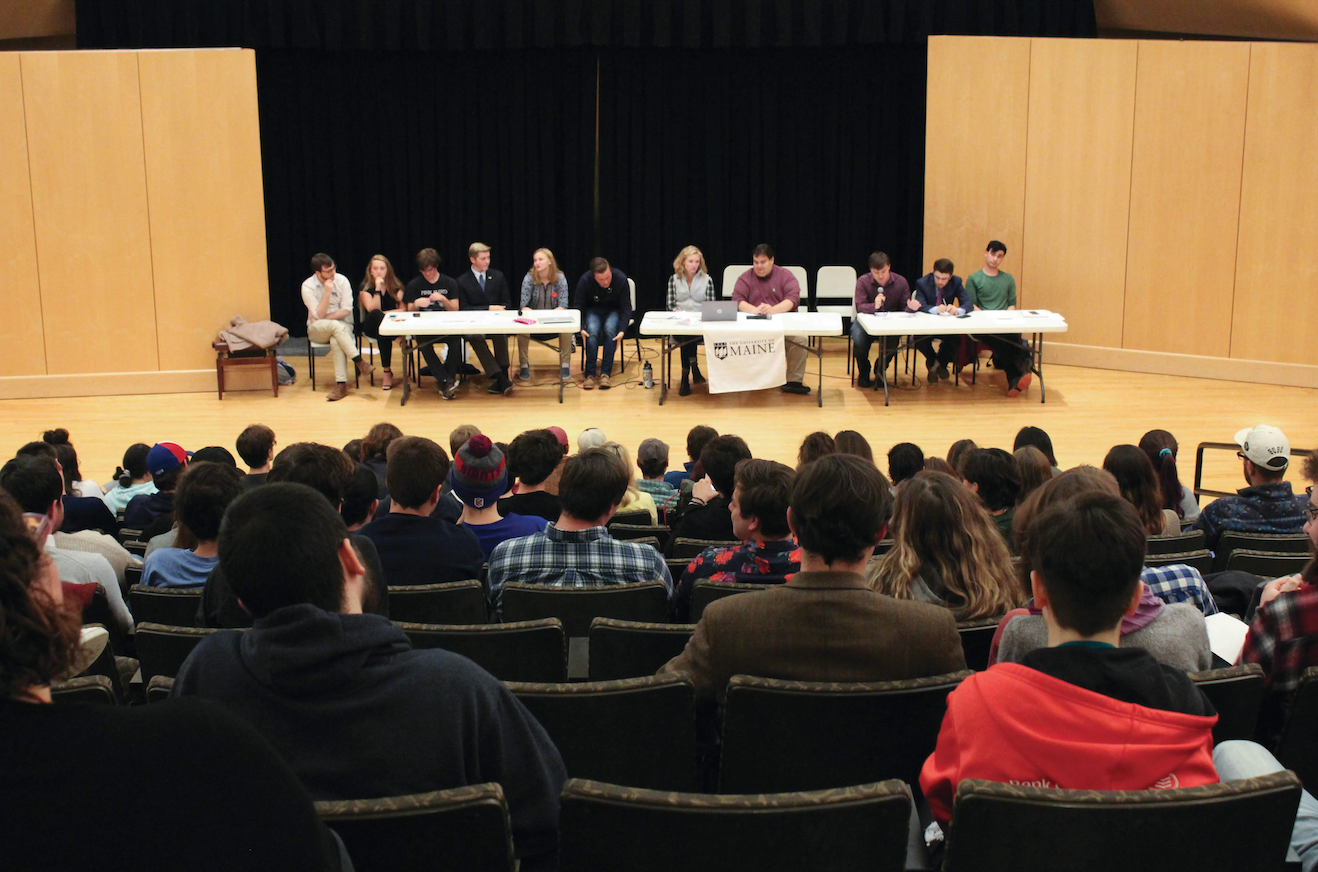 On Tuesday, Oct. 8 at 7 p.m., the University of Maine College Republicans (UMCR) and UMaine College Democrats (UMCD) groups held their first debate of the semester in Minsky Hall.

The debate was moderated by Cameron Bowie, a graduate student, and Abigail Despres, a fourth-year political science student.

The debate took place over the course of an hour, with each side stating a stance as each topic was introduced, followed by a question and one minute of response from each side. After each minute of response, five minutes of open debate and discussion was allowed. Finally, after the open debate and discussion section, audience questions were vetted by the moderators.

After a round of rock-paper-scissors, it was determined that the UMaine College Democrats would be responding to the prompts first.

The first topic during Tuesday night’s debate was immigration.

“Immigration is the foundation of our country, this is an undeniable truth,” Brown stated in the UMCD opening statement. The statement touched on issues such as poverty and food insecurity as driving forces for immigration, and expressed disgust at the treatment of immigrants who are currently being detained at the United States southern border in internment camps. To wrap up their opening statement, the UMCD expressed that they feel as though the immigration system in the United States must be reformed to be efficient by implementing proper funding and eliminating quotas.

The UMCR representatives rebuked the UMCD stance in their opening statement, asking the audience who immigration benefits. They detailed statistics which call into question how immigration could benefit the U.S., when the U.S. Immigration and Customs Enforcement (ICE) raids that detained hundreds of illegal immigrants created job openings for legal US citizens.

“These are people that live in struggling communities, and they need help,” Palmieri argued. “Forcing them to compete in an even tougher labor market surely doesn’t do that.”

The question opening the immigration portion of the debate asked each side what executive action they would hope to see the next presidential administration take when addressing immigration.

Moving into the second topic, gun control, the UMCD representatives stated various statistics on gun violence in their opening statement.

The UMCD noted that there are many factors, such as mental illnesses, which factor into violent gun-related crimes, and that by implementing thorough background checks and wait times to purchase guns, those who are mentally and physically capable of handling a gun safely will be granted the right to purchase a gun, without infringing on American’s second amendment rights.

The UMCR representatives stated that the second amendment, which grants the right to bear arms, is a valuable tenet of American values. They also argued that gun restriction laws were ineffective, citing the number of unregulated and unregistered guns in the US that were used to perpetrate violent gun crimes.

Following the opening statements, the moderators then asked if either the UMCD or the UMCR felt as though there should be a law banning the sale and possession of semi-automatic and automatic guns in the US.

The UMCD felt as though the regulation of guns in the US should focus on nuanced definitions of assault weapons, and noted that the support for gun regulation in the US has garnered bipartisan support. The UMCR stated that automatic weapons have already been banned in the US, and then went on to argue that many Americans own guns for self-defense and that taking guns away would be disempowering the American public. They then noted that many instances of gun violence can be traced to a background of mental illness, and that the focus should be on providing resources to manage mental illnesses rather than taking away Americans’ guns.

The final topic of the night covered health care.

In their opening statement, the UMCD stated that they felt as though the U.S., one of the wealthiest countries in the world, is capable of providing universal health care, as many developed nations around the world are able to provide universal healthcare for their constituents. They also stated that while a large amount of the U.S. population qualify for Medicare and Medicaid, often those services do not cover basic healthcare services, such as co-pays for yearly physicals.

The UMCR opening statement agreed that the current healthcare system is broken, but stated that they felt as though the solution to the health care crisis is not providing insurance for all. Rather, they feel as though hospital infrastructure should be improved, as well as providing better preemptive care to prevent the need for high-cost procedures.

The debate wrapped up with closing statements from both sides, with members from both the UMCD and UMCR groups thanking the UMaine community for attending the debate.

Both the UMCD and the UMCR groups plan to hold another debate in four to six weeks, with longer open debate times to allow for a more thorough discussion of the topics.

In the wake of injustice in Hong Kong, Lebron James serves as a worthy scapegoat
Editorial: Mid-semester burnout? We are not a fan