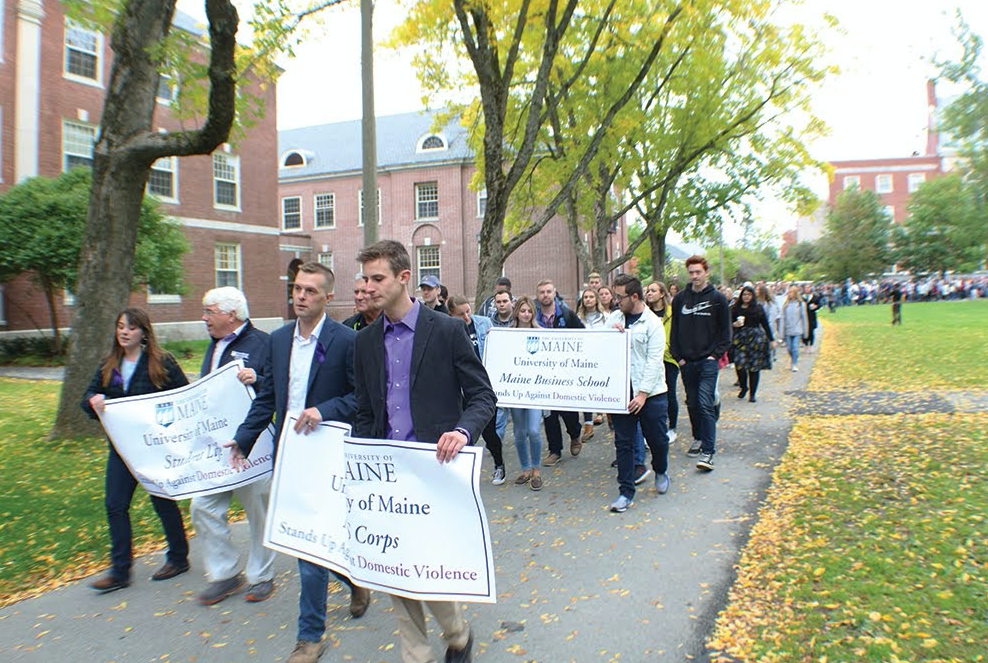 Eds: This article contains graphic details that may disturb or offend some readers.

On Oct. 2, 2019, the second day of Domestic Violence Awareness Month, the annual March Against Domestic Violence was held on the university Mall at the University of Maine. Several different on-campus groups, including the UMaine Male Athletes Against Violence, the UMaine Swim Team, Young Americans For Liberty, The UMaine College Democrats, UMaine’s Reserve Officer Training Corps (ROTC), Partners for Peace, Rape Response Services, the UMaine Feminist Collective and the Rising Tide Feminist Collective gathered to stand up for survivors of domestic violence and commemorate the lives lost to violent partners.

The march drew a large crowd of people who came from all walks of life. Due to the large turnout, some people had to scramble for room during the march.

“I’ve done this march for many years and this is the largest one I’ve seen,” Andrea Gifford, the assistant dean and director of student and administrative support services said.

Maine has some of the highest rates of domestic violence in the United States, which drew people to the march to observe the seriousness of this issue. According to recent data, one in  four women and one in seven men in Maine have experienced domestic violence.

For many of the marchers, domestic violence is a highly personal issue.

Monica Figueroa, a fourth-year student studying Communications and Media studies, said she was at this march to stand up for her mother. Figueroa’s mother survived domestic abuse from her former husband, which had a huge impact on Figueroa’s life.

“Basically, what happened was, [when] I was a junior in high school, I came home, and when I came home and walked through the door, [my mom] was covered in blood. She had her upper lip busted open,” Figueroa commented.

Figueroa described the shock she felt after seeing her mother in such a battered state.

“It was just kind of a hard thing for me to see being the only girl in the family,” she noted. “I never grew up around that kind of environment, because my mom hid it away from my brothers and I.”

Following the abuse she’d faced, Figueroa’s mother sought legal action against her perpetrator. She reported the abuse to the police and took her abuser to court.

“My mom won her case, in the sense that [her abuser] got put away for five years,” Figueroa said.

Additionally, Figueroa emphasized the importance of this march and other events for survivors. She encouraged the UMaine community to take further action to provide resources for survivors of domestic abuse.

“I agree that the march is a good idea [for domestic violence awareness]. Moreso, I feel as though we should be promoting more events for people to speak out and express any situations they may be having with family,” Figueroa said.

Jim Settele, interim director of athletics at UMaine, also expressed that he feels as though the UMaine community should do more for survivors than just an annual march.

“We don’t recognize this issue and issues like this enough,” Settele remarked. “We did a great walk today, a lot of people showed up, athletics is out here in force as they always are, but we’ll walk away from this, hear a couple of talks, but what’s next? What are we doing to stop domestic violence, to stop sexual harassment, to stop sexual abuse? How do we keep the energy that’s in the walk? How does it manifest itself in changing the culture, not just on campus, but maybe something more significant?”

Amber Hathaway, a P.h.D. candidate in the physics department and a member of UMaine’s Rising Tide Feminist Collective, offered an outlet and safe space to talk about the issue of domestic violence. The Rising Tide Feminist Collective will be hosting “Take Back the Night” on Oct. 23, which is an event that is centered around discussing the impact of surviving domestic violence.

OD Delivered: How drug dealing has made its way online
Annual Dirigo Leadership Conference hosted on Saturday in Memorial Union