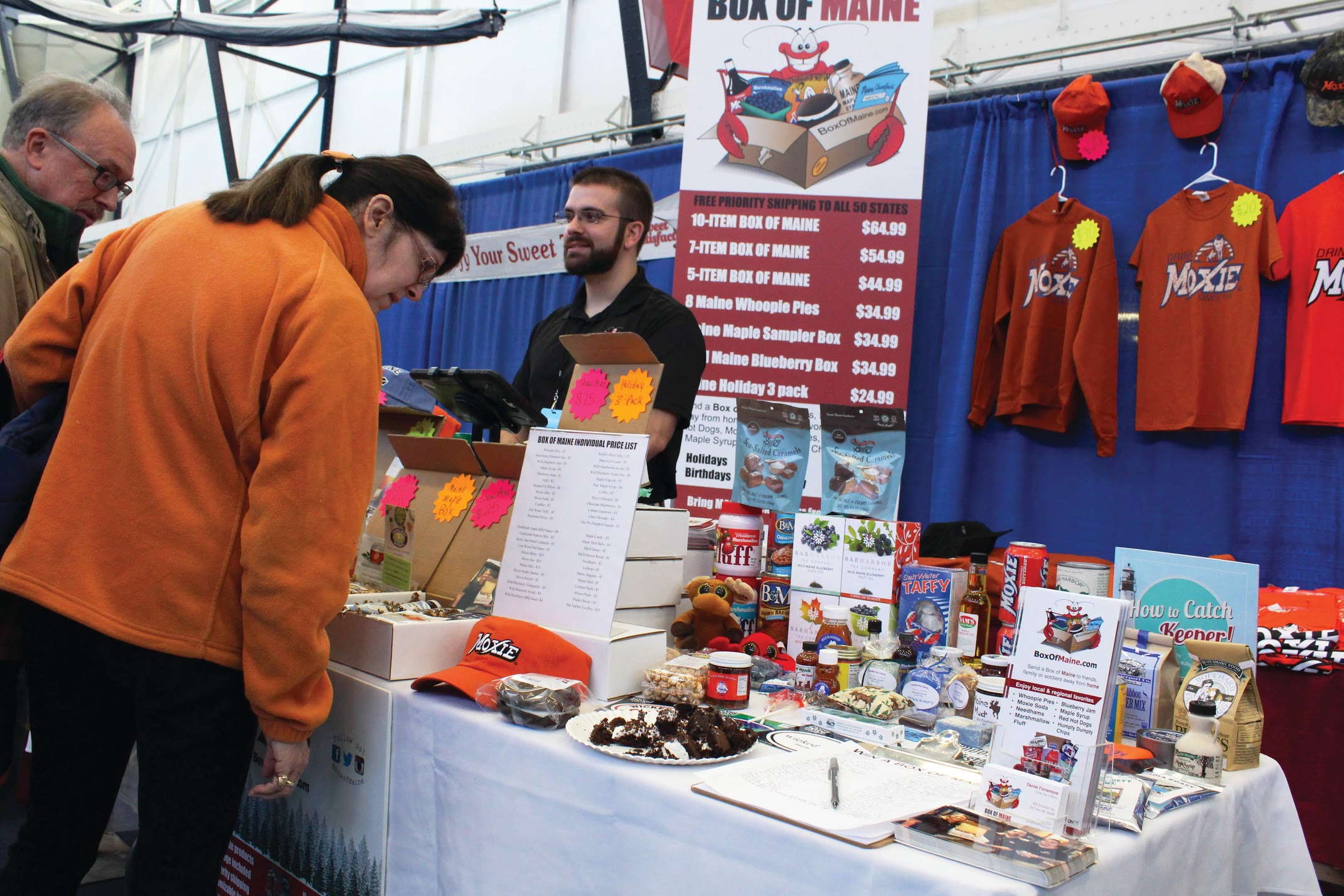 The two-day long Maine Marketplace located in the field house of the Memorial Gym is a place for local vendors to sell their goods to the students and alumni of UMaine. Photo by Antyna Gould.

On the weekend of Oct. 26-27, the University of Maine hosted the annual University of Maine Alumni Weekend Craft Fair as a part of Homecoming weekend festivities. The craft fair hosted over 150 local brands selling homemade products including honey, jewelry, paintings and much more. The craft fair fits right into Homecoming weekend as another event among the many events that brings together thousands.

The event was hosted in the New Balance Field House, located next to the sports fields, from 10 a.m. to 4 p.m. on Saturday and Sunday, which meant that the craft fair was directly adjacent to all the tailgating and excitement of the Homecoming football game. The atmosphere of the Field House was similar, albeit a little quieter, as people’s attention turned from games of corn hole to buying Christmas wreaths.

Craft fair events can vary but often feel like a larger farmer’s market that is focused less on food and instead on people’s crafts. They provide a great opportunity to see how the arts are more pervasive than one may initially think, as well as the chance to see all the niche and delightful things other people in the community are creating and all the talent that may otherwise be overlooked.

Plenty of the craft makers, in fact, produce their crafts for fun in their free time as a labor of passion outside of their day job or as a post-retirement activity.

Sherrie Brann, the owner of Out On a Limb Jewels from Sidney, Maine, said she makes plenty of her bracelets or other items “while watching TV” and that she enjoys the process because “it’s very relaxing.” The UMaine Homecoming Craft Fair is important for Brann because, for her, it is her biggest fair of the year, noting that while she may visit a few in a year, none compare to the size and scale of the one in Orono.

Brands like Out On a Limb Jewels are a good example of the fact that craft fairs often sell high-quality products for low prices; Brann’s earrings were on sale for $5. Lillian Legassey, or, as described on her business card, the Mitten Lady, was selling mittens for $20. Legassey has been making mittens for 14 years using a procedure that was handed down within her family. Lillian was happy to talk about the 10 steps it takes to make a pair and how, in her years making mittens, she began putting fleece linings in, an idea her parents or grandparents hadn’t included in their mitten making.

Another exciting part of these local artisanal product makers, at least in the family-originated ones, is that the younger family members that often take over are able to put their own spin on a product which says something about how families grow and their traditions can evolve. This is the essence of the Craft Fair and UMaine Homecoming: a large-scale community coming together to celebrate its members.

If you weren’t able to stop by this weekend, there are plenty of other places to get your homemade goods fix. The Orono Farmers Market has two installments every week, 2 p.m. to 5:30 p.m. on Tuesdays and 8 a.m. to 12 p.m. on Saturdays in the Steam Plant parking lot on campus. The Farmer’s Market has a great selection of fruits, vegetables, cheeses, meats and other items. Also, on Nov. 2-3 Bangor will host the “31st Annual Bangor Arts & Crafts Show” at the Cross Insurance Center, and the following weekend, Nov. 9-10, will be the “Augusta Maine Arts and Crafts Fair” at the Augusta Armory in the state capital.

New weekly feature at Orono’s Spotlight Cinemas
A Little controversy: Clarence Little in our history and on our campus