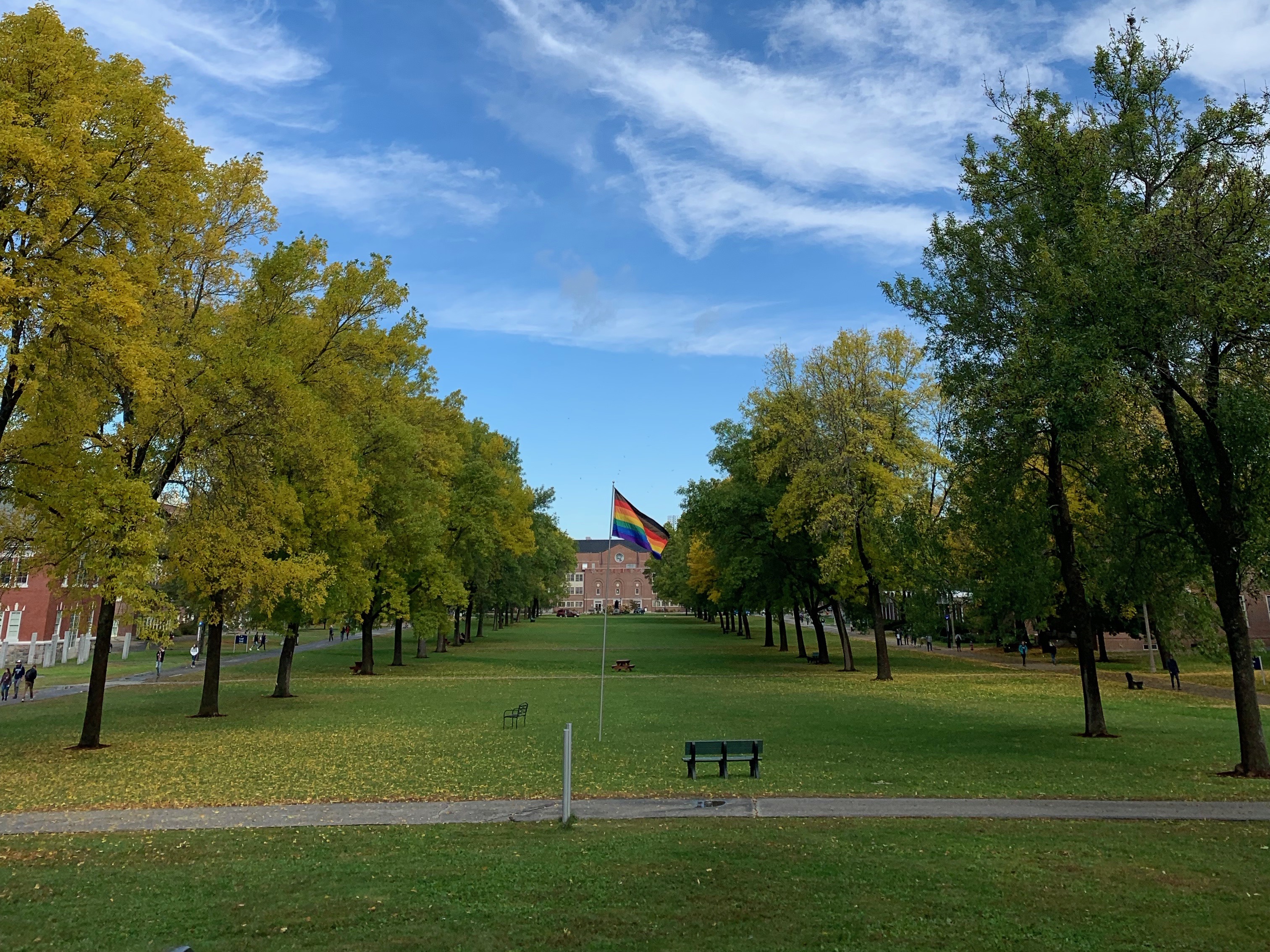 The pride flag flying high on the University Mall for Coming Out Week 2019. Photo by Sierra Semmel.

On Thursday, Oct. 11, the University of Maine’s Wildestein Queer-Straight Alliance held Coming Out Monologues to observe UMaine’s Coming Out Week. Coming Out Week is an opportunity for the UMaine community to recognize and celebrate the LGBTQ members of the community, as well as observe the work of influential LGBTQ figures from around the area.

During Coming Out Week, the university held many events around campus celebrating the LGBTQ community members, starting with a flag-raising on Monday, Oct. 7. The flag-raising ceremony featured speeches from Staff Associate for Diversity and Inclusion Robert Jackson, Director of the Office for Diversity and Inclusion Anila Karunakar and Vice President for Student Life and Dean of Students Robert Dana.

At Monday’s ceremony, Dana expressed his gratitude for the support that the UMaine community has shown for their LGBTQ members.

“I don’t think there’s anything more delightful than being able to go into a public space and say ‘Here I am,’” Dana said. “The Memorial Union is the central gathering space [for students, staff, and faculty], and what better place to be able to come and to say ‘This is my home.’”

“The University of Maine, whether you are figuring out who you are today, whether you are wrestling with that…whether your sexuality is different than what other people say it should be, is your home,” Dana declared in a message to the LGBTQ students at UMaine.

Throughout the week the Rainbow Resource Center (RRC), the Multicultural Student Center (MSC) and other student life offices offered programs to celebrate the spirit of pride and collaborated on events that discussed some of the more sensitive topics which affect the LGBTQ community. On Wednesday, Oct. 9, the RRC presented a Lunch & Learn at the MSC Lounge which discussed how initiatives that fight for marriage, adoption and reproductive rights affect marginalized communities within the LGBTQ community differently and opened a dialogue about racial discrimination within the LGBTQ community.

The Coming Out Monologues offered members and allies to the LGBTQ community a more private space to discuss their personal struggles with their LGBTQ identities and finding a place within the community. The event, which was closed to the public, offered a safe space for people to talk about their own journey with coming out. Many of the members expressed their gratitude for having a space in which to verbalize their own experiences with being part of the LGBTQ community without judgment.

Jane Pappas, the graduate advisor for the club spoke briefly at the event.

“There’s power in solidarity, and power in folks just leaning on each other within the community,” Pappas noted.

MJ Smith, the president of Wildestein, expressed how important the event was to the club members.

“This [was] an opportunity to speak your power about your coming out story and to be proud of who you are,” Smith said.

While members of Wildestein who participated in the event wished to remain anonymous, many of the dialogues focused on a common element within the LGBTQ community; understanding that each person’s experience is individual, and that many aspects of coming out can create difficult divides in relationships between family members and friends. Each speaker touched on different realizations that they had during their coming out journey, such as the struggle to feel as though their identity was accepted and expressed relief at forming “found family” relationships within the UMaine community.

The UMaine community wrapped up Coming Out Week with National Coming Out Day on Friday, Oct. 12. UMaine will hold Pride Week in April. For those interested in joining Wildestein, contact Jane Pappas at jane.pappas@maine.edu.