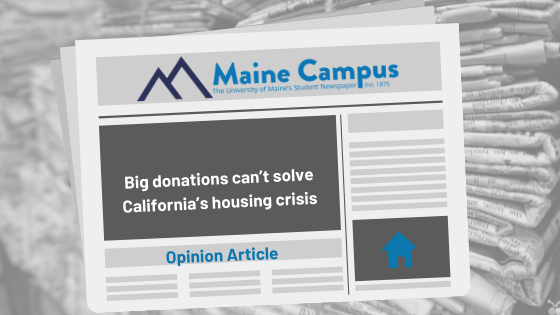 Over the last few weeks, technology companies such as Apple, Facebook and Google have donated billions of dollars to help solve the housing crisis in California. This philanthropic act aimed at alleviating the stress of homeownership and renting for the vast majority of Californians. The donations were charitable, kind-hearted and genuinely well-intended— here’s why they won’t help at all.

The donations of these tech giants are a classic example of the hyper-American mentality of throwing money at a problem until it’s gone. But truth be told, the issue for the renting population of California doesn’t exactly lie in the price of a home or an apartment. It lies in the fact that for decades, homeowners in cities like San Jose, San Francisco or Oakland have voted to zone the majority of the city for single-family housing units.

With that in mind, let’s say the $4.5 billion total donations of the California tech companies go straight to building the only thing they can: single-family homes. The average cost of a home in California is $1.4 million, which is well outside of the pay grade for California’s working class. Not to mention the fact that even if the land was rezoned, like in San Jose, where 94% of the city is zoned for single-family homes, and homeowners’ opinions were cast aside in the interest of the younger working population, California still needs to build $1.6 trillion worth of housing units. To put that in perspective, the combined total of the billion-dollar donations is about one-quarter of one percent of the money necessary to fill California’s housing gap. But again, this money isn’t the primary issue. Places like Atherton are zoned so that building apartment complexes is illegal.

In the meantime, cities are allocating certain parking lots as safe zones for homeless families living out of cars, vans or campers. These parking lots have social workers on standby for a few hours a night and security guards that roam the grounds a few times a day. It’s an improvement for most families for sure, but in the end, it’s just a temporary stopgap in communities that need and deserve more than just a concrete lot for themselves and their families.

Ultimately, the issue boils down to something extremely simple: it’s time for Californian homeowners to open their eyes and realize that the American dream has changed, and it’s time we change with it. People can no longer afford a family home right out of college, and it’s doubtful that anybody could afford any kind of home in California right after graduating. Cities need to be prepared for higher population densities and this means allowing the construction of affordable housing.

Sure, owning your own home with a white picket fence and a lawn is great, but if the city you live in has four jobs per housing unit, like Palo Alto, it’s time to wake up and realize that growth like this is unsustainable. California is already seeing the highest rate of domestic emigration in the entire U.S., with most people leaving the state to find new residences in states like Texas. Sen. Scott Weiner, a Democrat from San Francisco, sums up the situation perfectly: “California cities have systematically made it hard to impossible to build housing, and money can’t fix that.”

NHL Recap: Bruins go 1-2-0 on the week
Research for all: UMaine can do more to improve undergraduate research funding