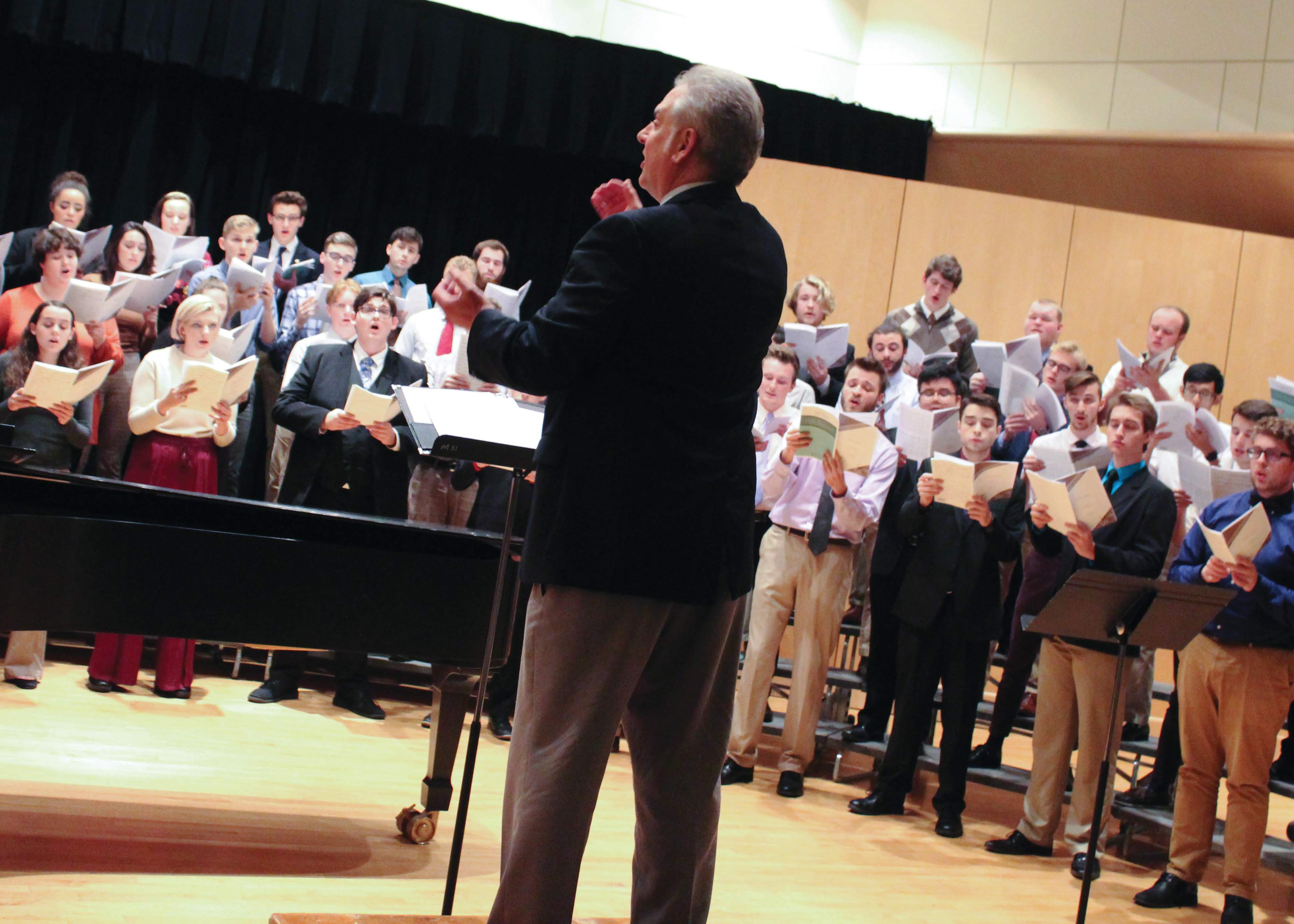 On Tuesday, Nov. 5th students, faculty, and the University of Maine Singers performed in Minsky Hall works created only by women. Photo by Antyna Gould.

On Tuesday, Nov. 5, University of Maine students and staff gathered in Minsky Hall to recognize eight female composers at the Women Composer’s Concert.

The Women Composer’s Concert is an annual event held in the fall that is meant to showcase female composers and to celebrate the presence of women in music. This year’s event featured Libby Larsen, Cecile Chaminade, Lucy Simon, Carla Bley, Billie Holiday, Bridget Kearney, Abbie Betinis and Carol Barnett.

“What I liked most about the concert was that it showcased many different styles, and gave a great well-rounded performance and representation of the talented women composers from both today and in the past,” Marissa Anne Smith, a fourth-year music student and publicity manager of The University Singers, said. “I think it’s important to represent these female composers and their pieces because it spreads awareness and hopefully inspires artists to seek out these pieces to know and perform.”

The music varied widely in genre and style, and mostly included opera, classical and soundtracks from musical theater. Lucy Simon was among the composers featured in the concert. “The Secret Garden,” one of Simon’s musicals, first appeared on Broadway in 1991 and has been known for its emotional and strong message. One song, in particular, that was performed during the concert was “Lily’s Eyes,” a dramatic and intense duet between two men reminiscing over a loved one.

Many of the composers showcased at the event are still alive today, making and producing music around the world. Each of their pieces were sung by individual members of The University Singers and UMaine Renaissance who performed in small groups and also played instruments. Some of the instruments included in the performance were the flute, bass guitar, piano and trombone.

“When we listen to music, many of us don’t even think about who is behind it — who had this idea and created it,” Smith said. “The industry is still male-dominated, so when we find these works by women, it is especially important to make sure they are recognized so that more of them will enter the industry and share their talent.”

Pianist Dr. Laura Artesani accompanied each of the student performers and also introduced the composers and gave background information for each piece. Flutist Megan Howell accompanied The University Singers during the last few minutes of the performance and also performed herself in multiple numbers. She is a member of The University Singers as well as in the UMaine Renaissance.

“We have been rehearsing since the second week of the semester,” Smith said. “These two pieces will be a part of our full set. We will continue to work on them throughout the year and will sing them at our Fall Concert on November 16th, Yuletide on December 8th and our annual New England Spring Tour in March and Spring Concert in April.”

Could unified accreditation be the solution for the UMaine system?
Human Beans events highlight local community and great food