Could unified accreditation be the solution for the UMaine system?

Home /Opinion/Could unified accreditation be the solution for the UMaine system? 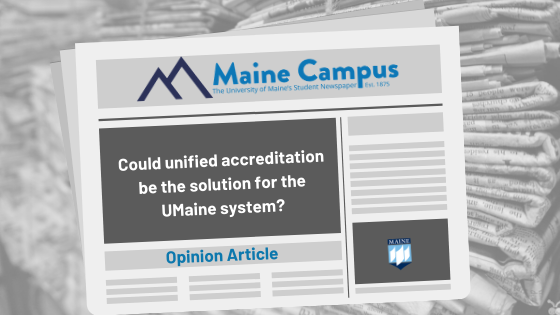 Within the next three years, all seven campuses of The University of Maine System could be working together as one governed body, but there are many who fear that this process may be fast-tracked and that the smaller campuses especially may suffer for it. Last Thursday, Nov. 7, the UMaine System Chancellor and Former Governor of Connecticut Dannell Malloy spoke with professors and other members of the university community in order to advocate for the UMaine system to switch from separate accreditation to one collective accreditation for all.

Accreditation is meant to signify that a university meets a certain standard of quality, enabling students that attend that institution to receive federal financial aid and transfer credits. Currently, all of the public universities in Maine are accredited individually with the exception of the Machias campus, which falls under UMaine, Orono’s accreditation. The governing body which accredits universities, the New England Commission of Higher Education (NECHE), expressed reservations around the collaboration between some of the universities and questioned, as they were concerned with whether they should be viewed as separate institutions. The Presque Isle and Fort Kent campuses in particular share education and nursing programs, a practice that has caused the NECHE to put the institutions “on notice,” according to WGME.

Chancellor Malloy and the UMaine system’s board of trustees see this collaboration as positive and would like to solidify it and ensure the survival of smaller campuses through unified accreditation. As such, the new chancellor has been visiting the different public university campuses around Maine with a plan to visit each campus at least three times in order to promote transparency and answer questions and criticisms about the unified proposal. On the website, which was created to follow the reactions and development associated with the unified accreditation effort, numerous concerns are outlined in the documentation of faculty feedback to the board of trustees. Most of these concerns have to do with the smaller campuses losing their agency over themselves, as well as doubts about how effectively a unified system would be governed given the complexity and diversity of the campuses.

According to a Bangor Daily News article published in September, “under the unified accreditation Malloy is proposing, smaller campuses … could lean on the system as a whole to satisfy those requirements.” This idea is concerning, in that it seems as if a goal of unified accreditation is to keep the smaller universities legitimized even if they alone cannot meet NECHE’s standards. According to WGME, Jim McClymer, a professor at UMaine and the head of the faculty union, appreciates the communication and transparency with the board of trustees and the chancellor, but at the same time asserted that they are rushing the process too much.

It is that question of execution which gets to the heart of the issue. Perhaps unified accreditation is moving in the right direction; the Fort Kent and Presque Isle campuses have actually supplemented programs, like nursing and education, for each other quite nicely. However, WGME reports that Molloy performed a similar merging of secondary education institutions when he was the governor of Connecticut, and it was not well-liked. Faculty concerns, laid out in a memo addressed to the board of trustees, also indicate a lack of confidence in the bureaucratic system: “it does not make sense to have them be making this decision just based on recommendations from the Chancellor’s office.”

Perhaps the board and chancellor will push the plan through with or without the support of faculty, and I hope that it has a positive effect on the University of Maine System at large. But as of right now, the effort seems like it could be disorganized and faculty must be looked to for the vital question of whether or not this change will benefit the student body of the University of Maine System or just the system itself.