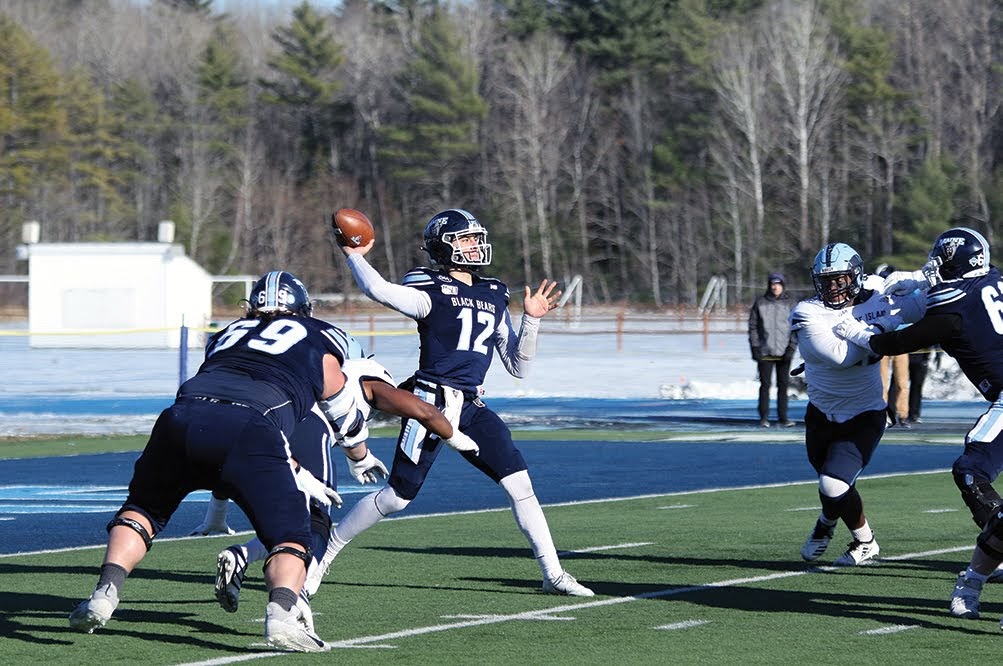 This past Saturday, Nov. 16, the University of Maine Black Bears hosted the University of Rhode Island Rams for the Black Bears senior night and last home game of the season. Maine came into the contest at 5-5, riding a three-game winning streak and hoping to extend it for playoff implications. The Rams were trying to get their third win, as they’ve struggled this season, sitting at 2-8.

Rhode Island took the ball to start the game and appeared that they came ready to play. They took the opening drive 77 yards, ending it with a two-yard rushing touchdown from fourth-year running back Naim Jones. Following the opening scoring drive, Black Bears’ first-year quarterback Joe Fagnano and Maine’s offense set up shop at their own 35-yard line. After hitting fourth-year wide receiver Earnest Edwards for a 20-yard gain, Fagnano was sacked for a six-yard loss. Now on second-and-16, Fagnano felt the pressure of the pocket collapsing around him. In his attempt to escape he fumbled the ball, which was recovered by Rhode Island’s third-year defensive lineman Andre Bibeault.

The game then hit a stalemate as the defenses took over, with Maine’s fourth-year punter Derek Deoul and Rhode Island’s second-year punter Davey Schaum-Bartocci both getting heavy usage. Maine couldn’t buy a first down even if they wanted to and were unsuccessful the entire day at converting on third down, going 0-8 on such attempts. With just under 10 minutes to play in the second quarter, the Rams managed to piece together a 13-play, 43-yard drive ending in ridiculous fashion.

Facing first-and-goal from Maine’s 9-yard line, third-year defensive lineman Kayon Whitaker beat a double team off the snap and was in the backfield before Rams’ first-year quarterback Darius Perrantes could complete his drop back, dropping him for a six-yard loss. On second-and-goal, now at Maine’s 15-yard line, Perrantes was taken down once more, this time for a 10-yard loss, and almost a turnover as Perrantes fumbled the ball, but Rhode Island recovered the loose ball. On third and goal, now at Maine’s 24-yard line, the ball was handed off to third-year running back Justice Antrum, who fought for every one of the 21 yards he gained on the play but was stopped three yards short of pay dirt. A chip shot field goal from Rams’ third-year kicker C.J. Carrick from 20 yards out gave the Rams a 10-0 lead. With just a minute and a half left before halftime, Fagnano executed a clean two-minute drill, hitting multiple wide receivers for short gains, resulting in a 28-yard field goal made by second-year kicker Kenny Doak. The half would end at 10-3 Rams.

Maine had the ball to start the half and once again struggled against the Rams front seven, forcing another three-and-out. With their inability to move the ball on offense, the Black Bears defense could only hold the Rams back for so long without some help from the offense. After an unsportsmanlike conduct penalty was committed by Maine during a punt return, a booming kick by Deoul from his own 25-yard line to the Rams’ 30-yard line resulted in Rhode Island’s offense setting up shop on the Black Bears’ 43-yard line. Rhode Island capitalized and scored on a 34-yard rushing touchdown, again by Jones for his second of the day. This would give Rhode Island the 17-3 lead. During a weak punt, the Black Bears punt returner ran the ball back 28 yards giving them the ball in the Rams’ red zone to start the drive. Fagnano finished the drive with a 19 yard touchdown pass to second-year wide receiver Devin Young.

Rhode Island elected to make a change at quarterback for their ensuing drive, throwing third-year signal-caller Vito Priore under center. Priore served dutifully, completing two of three passes for 44 yards, the first for 32 yards to fourth-year wide receiver Aaron Parker and the second a 12-yard touchdown pass to fourth-year wide receiver Ahmere Dorsey. This would give the Rams a 24-10 lead in the middle of the third quarter.

The Black Bears’ next drive started by changing up the Rams’ ability to control the line of scrimmage. Edwards was handed the ball twice on jet-sweep style plays, gaining 18 yards on the first attempt and 11 on the second. This effort to make the Rams’ front seven play on their heels, instead of bull-rushing Fagnano, bought the offense enough wiggle room to continue on down the field, resulting in another Doak chip shot field goal.

The Rams continued to have another efficient drive but struggled once they approached the red zone. Carrick made a 38-yard field goal, giving the Rams a 27-13 lead.

Maine, heading into the fourth quarter, down by 14, channeled their inner New England Patriots and went to work on their comeback. Young rushed for 22 yards and first-year running back Emmanuel Reed popped off another run for 16 yards. Reed toted the rock the majority of the drive and found the end zone on a 12-yard scamper to bring the score to 27-20.

During a deep kickoff, Dorsey returned it 70 yards to Maine’s 23-yard line. The Black Bears red zone defense continued to shine, forcing the Rams to send out their field goal unit. Carrick missed the attempt, giving Maine back the ball on their own turf. Maine’s offense dissected the Rams for chunk gains, including a 21-yard pass to Edwards. Edwards then continued his last performance in front of the Maine crowd with a 44-yard rush. Third-year running back Joe Fitzpatrick would do the dirty work, banging between the tackles for a three-yard score to knot the game up 27-27.

Rhode Island continued to take time off the clock as Priore completed a 23 yard pass to Parker and continued to run the ball. A swarming Black Bears front seven pressured Priore heavily, causing him to throw back-to-back incompletions, sending Carrick in to bring the score to 30-27.

With only two minutes left on the clock, the Bears sent in their offense to try and finish the 14 point comeback. Fagnano hit Young for a 44-yard reception to start the drive. Fitzpatrick then hauled in a 12-yard pass putting the Black Bears at the Rams’ 26-yard line. Hennie proceeded to run a strike pass 15 yards to the 11-yard line. Fagnano dropped back on first-and-10, and uncorked a dime to Edwards in the front corner of the end zone for the 11-yard touchdown. Maine’s defense held on Rhode Island’s ensuing drive, and Edwards made the game’s final tackle after running out onto the field to play deep safety against any Hail Mary attempts.

Maine improves to 6-5 on the season and will be traveling to New Hampshire for their border battle against the University of New Hampshire Wildcats on Saturday, Nov. 23.