Global warming is here and now, and our country is burning

Home /Opinion/Global warming is here and now, and our country is burning 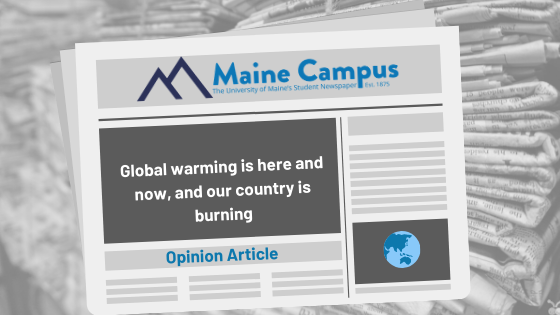 With the current rate that ice caps in Greenland and Antarctica are melting, sea levels could rise two to seven feet globally by the end of the century. By 2060, up to 30.2% of homes in Miami Beach will be flooded. By 2100, India’s Chota Nagpur Plateau will be too hot for humans to survive. But let’s be honest, for most of us, as shocking as these statements might be, they don’t change much in our everyday lives: they’re far-off, futuristic predictions. Plus, we might fix the problem by then, right?

Now let’s talk about something that hits a little closer to home; last year, in the United States alone, there were 58,083 wildfires. They covered 8.8 million acres, or an area a bit larger than the entire state of Maryland. The largest fire of 2018, the Camp Fire, killed 86 people.

Fires in the western U.S. grew so massive that they caused air quality issues even here in Maine. Right now in America, the largest wildfire that is actively burning covers 505,273 acres and it’s in Alaska. Since 1970, the typical wildfire season has stretched to two and a half months longer than it used to be. In California, the fire season runs from October until September of next the year, so the entire state essentially spends all year worrying about the warm orange glow that backlights the hills at night.

This isn’t how it used to be. Large fires in the U.S. have become more prevalent as global temperatures rise and climates become drier and hotter. As this happens, trees and grasses become more susceptible to burning, allowing a little pest known as the Mountain Pine Beetle to thrive. This beetle kills off trees by the millions, priming landscapes for catastrophic burns that sterilize the forest soil instead of rejuvenating it like natural wildfires usually do.

Since 1972, California alone has seen a 405% increase in burned areas. The U.S. as a whole has gone from 1.3 million acres burned in 1983 to 8.8 million in 2018. High temperatures, invasive and devastating tree pests, and a history of land mismanagement have led to today’s conditions.

In 1910, the Big Burn of Montana and Idaho destroyed a swath of rich forest covering an area the size of the state of Connecticut. The U.S. Forest Service, the agency responsible for America’s National Forests, soon adopted the 10 a.m. policy, promising that any fires spotted would be out by 10 a.m. the next morning. This policy was misinformed and led to overcrowded and sickly trees living in forests that depended on wildfires for healthy, natural regeneration.

Now, the combination of poorly advised fire policy and rampant global warming has led to catastrophic results in America’s backyard. Even with the “alternative facts” crowd in the Oval Office, Americans no longer have to look to the far-away future of submerged cities and broiling continents to wonder and marvel at what climate change might mean for us. This country is on fire. It’s burning now and it will only get worse if we don’t do something about it.