Hatebook: how social media can be used to spread prejudice

Home /Opinion/Hatebook: how social media can be used to spread prejudice 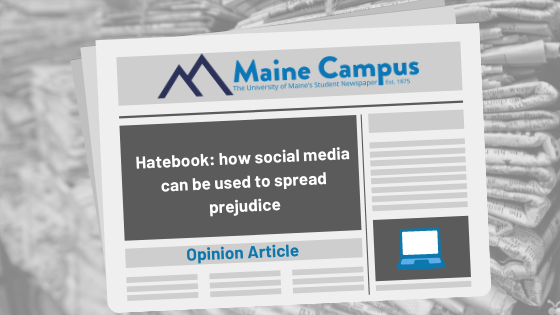 On Nov. 5, a white supremacist was charged with plotting to blow up a Colorado temple and it’s said that the outlet that he used to air his frustrations was one that we are all familiar with: Facebook. Due to his frequent use of Facebook as a way to share his anti-semitic outlook, he had been tracked for years by local authorities. However, the question remains, is it the responsibility of various social media outlets to protect against hate speech? To what extent should these outlets attempt to censor certain user’s voices in order to make their platforms more accessible and hospitable to all who wish to use it, especially those in traditionally marginalized groups?

Facebook is running into the same problem Twitter faced in the recent outrage over President Trump’s use of the app to agitate certain problems. For Facebook, however, it appears that the issue of aggressive message sharing isn’t between a president and his national and international audience, but rather between family members or neighbors. As the 2000s have moved through trends, Facebook has become more of a social media for the older demographic, often favored by parents and grandparents and seen by many younger internet users as a more formal form of social media. Rather than the memes and jokes that are seen on Twitter, or the photos that are shared on Instagram, Facebook remains a place where people share their thoughts and have a wide audience, often containing only those who the user knows in real life.

It’s because of this intimacy on Facebook that the power and ability to say whatever one wishes can be seen as a direct threat to one’s livelihood if these messages are hateful. In the case of the 27-year-old white supremacist who attempted to place a bomb in a synagogue last week, a particular message was shared on Sep. 9 in reference to Jewish citizens: “I wish the Holocaust really did happen … they need to die.”

This message is blatantly hateful and would be more than enough to harm Jewish citizens who come in contact with the message or with the man himself, regardless of the fact that he later attempted to take action in order to fulfill these beliefs.

It’s difficult to say where exactly the boundary lies between protecting a platform’s users and preventing another user’s free speech, a line that has been attempted to be drawn for a decade now since the rise in popularity of social media. Until Facebook and other platforms begin to crack down on hateful speech, slurs and threats, the most we as users can do is to remain vigilant and make our own private pages as welcoming and accepting for all, especially for marginalized groups that face so much hate online.

Fake News workshops seek to educate the UMaine community
Could unified accreditation be the solution for the UMaine system?