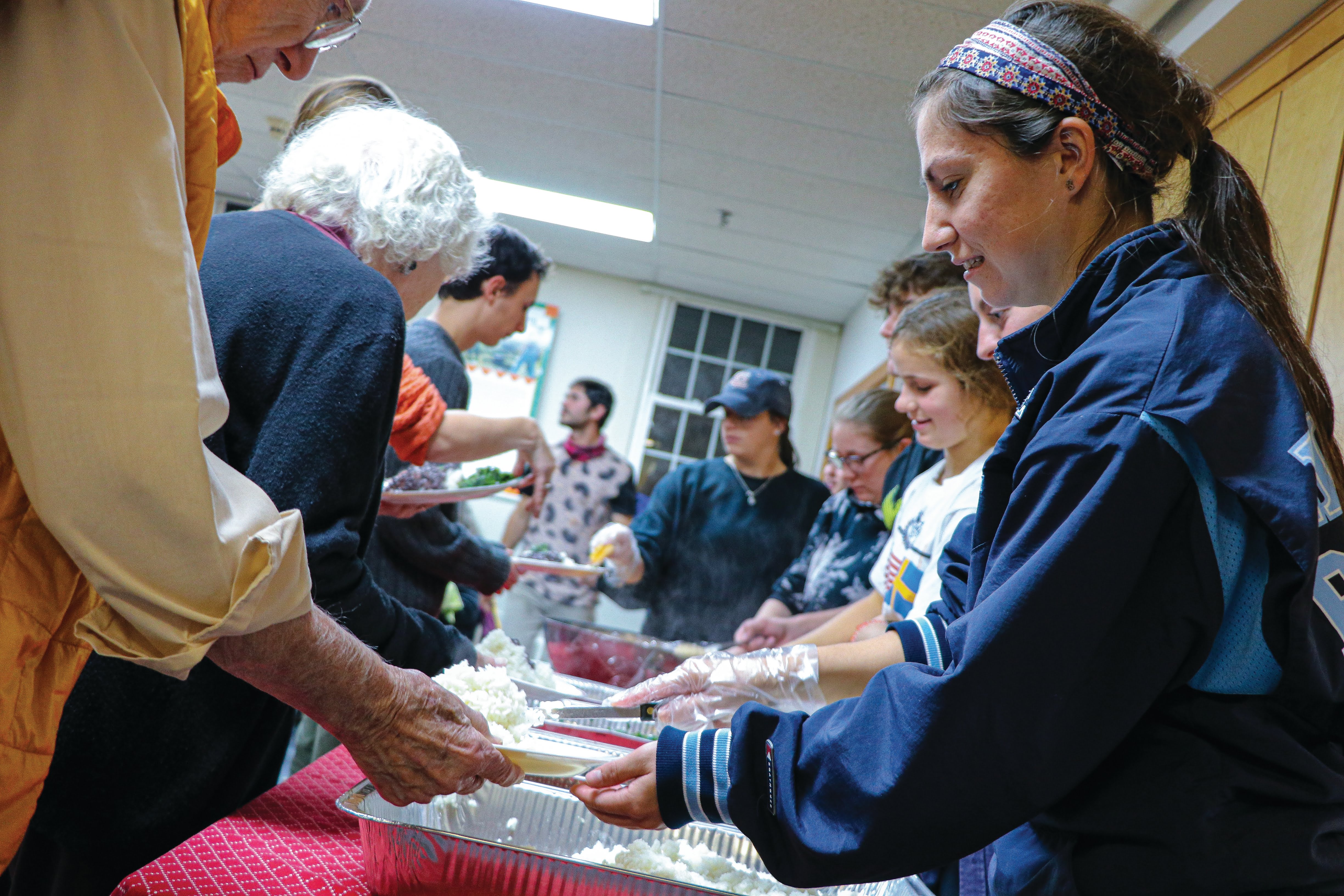 On Tuesday, Nov. 5 the latest installment of the “Human Beans: A Bean Supper Series” was hosted by college of liberal arts and sciences faculty member Taylor Ashley and the McGillicuddy Humanities Center. The event took place on a rainy night at the Church of Universal Fellowship in Orono. But Tuesday’s cold and rain did not stop dozens of families and friends from piling into the church to eat bean-centric foods and discuss culture and society through those meals.

The Human Beans series is a series of bean suppers that take place throughout the semester, all of which have taken place at the Church and have been hosted by the McGillicuddy Humanities Center. The series is a part of their annual symposium theme on “Society, Colonization, and Decolonization” and consists of five total suppers.

This series has had three installations which have featured dishes “including Franco-American bean-hole beans with brown bread, U.S., southwestern-style beans with red & green chiles, Cuban bean chili,” according to the event description, but this week the focus turned south to Brazil, featuring “Brazilian Black Beans” as the main course.

In addition to the food, the evening included illuminating talks from Professor of Ecology Eric Gallant, who discussed his research experiences in Brazil, and local farmer and chef Billy Barker who discussed her farming and small business experiences. Both addressed the importance of local communities and how those communities relate to agriculture/food production.

The progression of the night was led by Taylor Ashley who thanked and introduced the dozen or so volunteers who helped the night happen and then discussed the story and message of the Human Beans series.

“The Bean Series began as a way to bring our community together in the name of a free, traditional and vegetarian meal,” Ashley said. “It’s also a way to let folks know about our upcoming Pan-American overland expedition to explore America’s bean culture with a special focus on cultivation, cuisine and community. The Bean Suppers are simply a way to share aspects of our upcoming expedition with our local community.”

Ashley described his plans for traveling across the Americas with his wife, Katie, to explore food and community more in-depth.

“[We] are setting out on a Pan-American Overland Expedition to explore the bean culture of the Americas” Ashley said. He went on to describe their plans to drive from Maine to southern Chile to the mouth of the Amazon River, with their journey beginning on Dec. 13. Those who are interested can follow along on their blog at stepforwardtravel.com.

“We’ll also be doing outreach to local middle school classrooms by producing educational content that will be incorporated into their curriculum, as well as Skyping along the way,” Ashley said. “Finally, our goal is to shed light on the beauty of the Americas, to highlight their similarities and celebrate their differences.”

This celebratory atmosphere was felt at the bean supper on Tuesday, with people enjoying the food and company of those around them. The meal served was ostensibly rice and beans with veggie sides and orange slices each dish was home-cooked, unique, hearty and very enjoyable.

The series is made up of five installments: Maine, New Mexico, Brazil, Cuba and Global, with each night exploring new bean-centric dishes from different geographic areas. Taylor discussed some of the planning that went into these decisions.

“We decided to begin with Maine because that’s our community and where the Bean Supper was first introduced,” he said. “New Mexico and Brazil are along the route we’ll be following. Since I’m Cuban-American we wanted to share aspects of our culture with the community, plus the food is delicious! Finally, the Global Bean Supper is a way to share everyone’s culture and traditions and serve as a way to wrap up the series. It’s important to note that the first four meals all used beans that were originally cultivated in the Americas. That’s important because it expresses contributions to the global food supply that the original inhabitants of the Americas made.”

The Human Beans Series highlights how food is an excellent and delicious way of understanding our culture as well as the many cultures of the world, and how we are all so connected.